Please ensure Javascript is enabled for purposes of website accessibility
Log In Help Join The Motley Fool
Free Article Join Over 1 Million Premium Members And Get More In-Depth Stock Guidance and Research
By Anirudh Shankar - May 1, 2021 at 5:25AM

Safety and security are two of the core principles of long-term investing. Johnson & Johnson (JNJ 1.13%) and Merck (MRK 1.37%) are quintessential blue-chip companies in the pharmaceutical industry that have tremendous track records when it comes to rewarding shareholders. Here is why you might want to consider buying these two companies, and holding them for the long term. 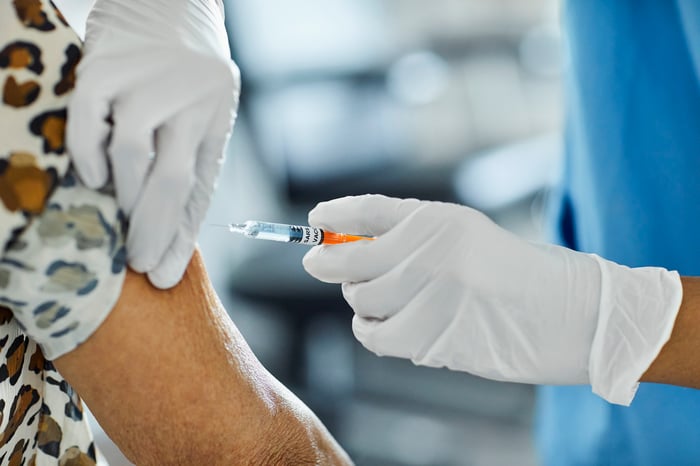 In 1886, pharmacist Robert Wood Johnson formed a new company with his brothers James Wood Johnson and Edward Mead Johnson. This company would become the Johnson & Johnson we know today. The business is behind many consumer favorites we use everyday, like Band-Aid and Tylenol.

When the COVID-19 pandemic shook the world, Johnson & Johnson stepped up to deliver. The company's Janssen Pharmaceuticals division developed a COVID-19 vaccine that was approved by the U.S. Food and Drug Administration on Feb. 26, 2021. The company is also highly diversified across many markets and product lines. While the bulk of its sales come from the United States, the company also derives $18 billion in annual sales from Europe and $15 billion in annual sales from Asia. It also adds $5 billion annually in sales from Canada, Mexico, and Latin America. And the company's total revenue has been on the rise in the past few years. Johnson & Johnson's total revenue grew from $70.1 billion in 2015 to $82.1 billion in 2019. It operates in several business lines, from pharmaceuticals in oncology and immunology to consumer products, and derives a good portion of its revenue from medical devices as well.

Operating in many markets and across many types of product provides Johnson & Johnson with a very wide moat, giving it the ability to derive revenue from a variety of products across different segments and regions, in almost any economic condition.

Merck has been in operation since Jan. 1, 1891. The company has been at the forefront of many innovations over the years, having created the first smallpox vaccine for commercial use in the U.S., the painkiller Vioxx, and the HPV vaccine Gardasil, which is still a big earner for Merck today.

Merck is now behind one of the best-selling drugs in the world -- Keytruda. AbbVie's Humira currently holds the record for the best-selling drug on the planet, but with a patent cliff approaching in 2023, it looks like Keytruda is poised to take its place. With the continued regulatory wins Keytruda has been notching to treat a variety of indications, its success should come as no surprise.

Keytruda has so far been able to treat 25 different types of cancer. These range from breast and skin cancer to kidney cancer. Merck expects to expand Keytruda into new indications and to market it as a foundational drug that is a part of every patient's journey on the path to becoming cancer-free. Keytruda is sold all around the world. Just for the year 2020, Keytruda made Merck $14.4 billion dollars and is growing with each year on the market.

Merck has been growing revenue at a stable 3.7% over the last five years, with forward revenue growth expected to be about 5.27%. With a great pipeline of drugs and an eye toward acquisitions to drive eventual pipeline growth, Merck is a tried-and-true but future-minded stock.

Johnson & Johnson is also part of a special group of companies classified as Dividend Aristocrats. This means Johnson & Johnson has increased its dividend each year for the past 50 years. Now, past performance is no indication of future success, but with the recent moves the company has been making on the vaccine front, as well as its international diversification, it's likely the streak will continue.

Merck, on the other hand, did not raise its dividend during the Great Recession, but it at least kept it steady. The company has been regularly increasing dividends annually since 2011, and can currently boast over 10 years of regular annual dividend increases. Johnson & Johnson and Merck are both reliable dividend companies with current yields at 2.4% and 3.4%, respectively, above the SPDR S&P 500 ETF, which yields just around 1.3%. For investors with long time horizons, Johnson & Johnson and Merck could be just the companies to buy today.