Please ensure Javascript is enabled for purposes of website accessibility
Log In Help Join The Motley Fool
Free Article Join Over 1 Million Premium Members And Get More In-Depth Stock Guidance and Research
By Will Healy - May 1, 2021 at 8:10AM

In a strange turn of events, AMC Entertainment Holdings (AMC -1.64%) stock has prospered in 2021. A renewed interest in the stock took it to levels not seen since well before COVID-19 forced theaters to shut down. However, the end of the pandemic will probably bring new struggles for the theater chain. Instead of buying into a hoped-for recovery, investors should consider avoiding this entertainment stock for the three following reasons.

1. A lingering reluctance to return to theaters

COVID-19 numbers have fallen in recent months as millions of Americans receive vaccinations and governments continue to lift mask mandates. Nonetheless, customers have not returned. Theaters reported an overall gross of just under $57 million in the last weekend in April. Box office receipts amounted to more than $402 million during the same weekend in 2019, according to Box Office Mojo.

Another issue is the movies themselves. Studios have not released as many films as they did before the pandemic. Movie releases fell by just over 50% in 2020. This led to box office receipts falling to $2.1 billion during that period, an 81% drop from 2019 levels. 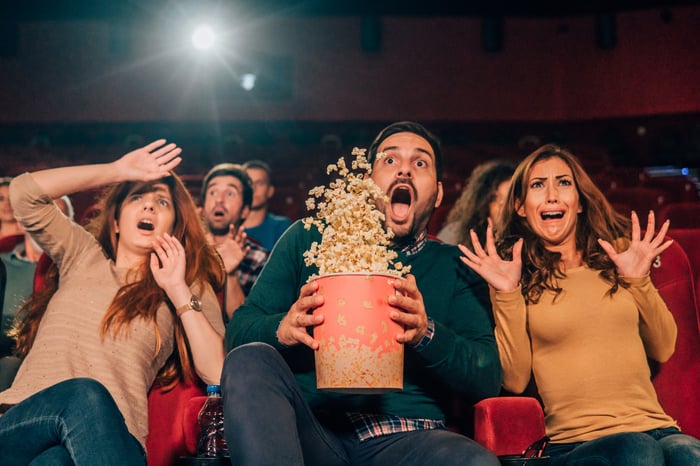 Moreover, theater releases had often shifted to making their new films available on streaming simultaneously. Since many moviegoers have also invested in home theater systems, they have fewer reasons to visit AMC's theaters and those of Cinemark, IMAX, and other peers.

Admittedly, many people may still want to enjoy a day or a night out at the theater. For this reason, investors should not expect the industry to disappear. However, it looks poised to shrink, and how AMC manages that decline will determine whether it can survive long-term.

This change in consumer preferences has decimated AMC's financials. In 2020, revenue fell by more than 77% to just over $1.2 billion. Unfortunately, cutting costs did not make up for the asset impairments the company suffered. For this reason, operating expenses saw an increase of under 1% from 2019 levels. This contributed to AMC losing $4.6 billion in 2020, a drastic drop from the $149 million lost in 2019.

These losses have leveled the balance sheet. The most significant change involved the aforementioned goodwill impairment, which reduced goodwill by more than $2.2 billion. Losses in operating lease right-of-use assets and other long-term assets related to joint ventures shrank the asset base further, by more than $550 million. Corporate borrowings also increased by just under $1 billion.

These changes helped take the book value of AMC, the value after subtracting liabilities from assets, to negative $2.9 billion. AMC claimed a book value of $1.2 billion at the end of 2019.

3. The state of AMC stock

Interestingly, this has not affected the stock as much as one might expect. AMC fell by 71% in 2020. However, the stock's fortunes reversed when it became a short-squeeze target of Reddit's WallStreetBets. This took it from the $2 per share range to an intraday high of $20.36 per share in January.

Though it fell by 47% from this peak, it continues to gain speculative interest. Consequently, it has risen by close to 420% since the beginning of 2021 and by just under 65% since the start of 2020. 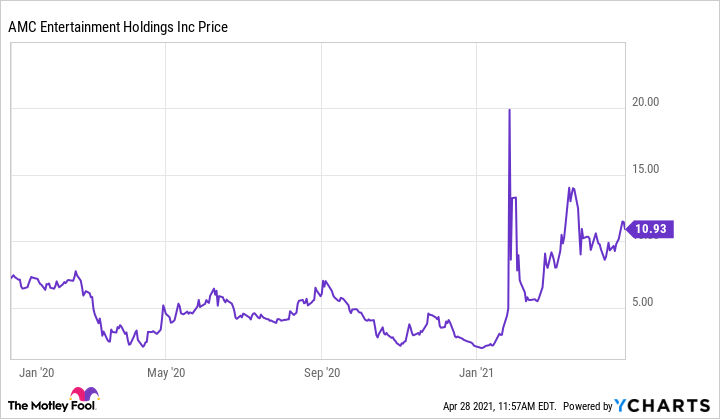 However, such speculation rarely becomes a long-term phenomenon. Stocks that rise over the long haul usually increase in value due to sustained increases in revenue and profits. Once traders begin to pay attention to such fundamentals, the reopening of theaters could easily turn into a "sell the news" event.

AMC has also taken advantage of this higher price and issued more shares. The company has more than quadrupled its share count over the last year to about 450 million shares. AMC issued many of those shares before speculators took the stock price higher. Consequently, AMC planned to put forth a proposal to issue an additional 500 million shares, a move that would have taken the share count to around 1 billion.

It later chose to backtrack and reduced the proposed issuance to 43 million shares. Still, given the dilution that has already taken place, holding this stock looks like a no-win scenario for shareholders.

Where this leaves AMC

Changing consumer tastes, weak financials, and the state of its stock will probably weigh on AMC as theaters reopen. Not only will these challenges pressure the stock, but it will also face a war of attrition as it fights for a smaller number of customers amid challenging financials. While AMC may maintain its existence, mere survival will likely not foster investor gains.