Please ensure Javascript is enabled for purposes of website accessibility
Log In Help Join The Motley Fool
Free Article Join Over 1 Million Premium Members And Get More In-Depth Stock Guidance and Research
By John Ballard - May 2, 2021 at 8:16AM

The stock is flat year to date after rising 56% in 2020. Will the first-quarter report spark further gains?

Top video game producer Activision Blizzard (ATVI -0.63%) will report its first-quarter earnings on Tuesday, May 4, after the market closes.

After soaring in 2020, the stock price hasn't budged, currently down 1.4% year to date at the time of this writing. Investors are likely waiting to see how Activision Blizzard's business performs as the economy reopens.

We'll review the company's recent performance and guidance before determining whether it's worth a buy. Also, there's one interesting trend that could serve as a near-term tailwind for Activision's business. 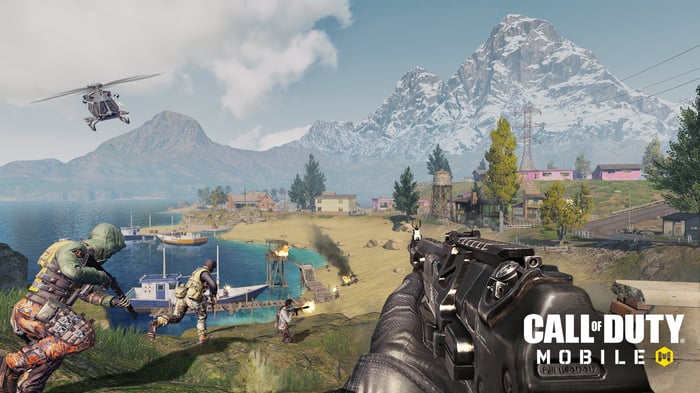 2020 was a record year for Activision

After slumping in late 2018, the stock rocketed to new highs in 2020 following a completely revamped Call of Duty franchise that saw new releases across mobile, PC, and console. Activision Blizzard finished 2020 with revenue and adjusted earnings per share up 25% and 39%, respectively.

Activision expects growth to continue at the start of 2021. For Q1, management's guidance calls for revenue to reach $2.015 billion for a year-over-year increase of 12.7%.

However, the stock price will likely respond more to the change in bookings -- the metric that Wall Street analysts care about. Bookings should be $1.75 billion, representing an increase of 14.9%.

Here's how the stock has performed relative to the S&P 500 index since the release of Call of Duty: Warzone, which now has more than 100 million players. 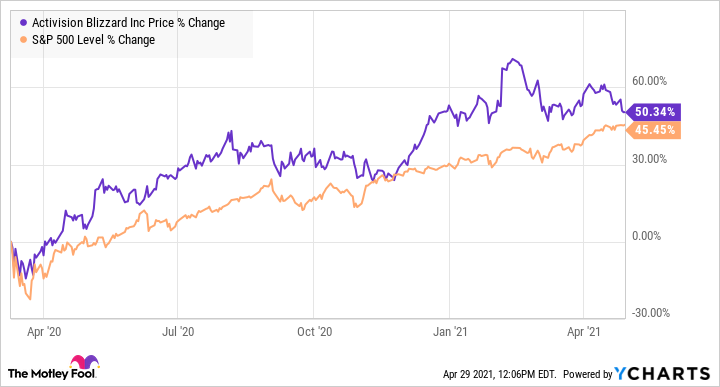 Looking ahead to the second quarter, the company will face difficult year-over-year growth comparisons.

Activision launched the free-to-play Call of Duty: Warzone on March 10, 2020. The title gained more than 60 million players within a few months of release. That helped drive bookings up 72% year over year in Q2 2020.

Activision likely won't match that performance. Earlier this year, management issued preliminary full-year guidance for 2021, calling for bookings to increase by less than 1% over 2020. Adjusted earnings per share should be up 4% to $3.34.

Despite the expectation for lower top-line growth in 2021, the stock trades in line with its peers on a forward price-to-earnings basis. Here's how Activision Blizzard's valuation stacks up to those of other video game stocks. 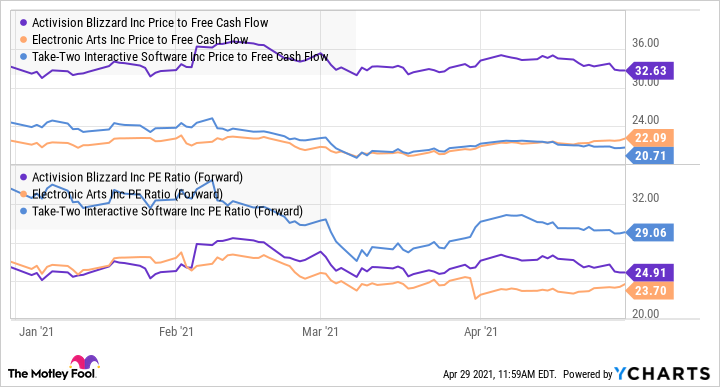 One trend working in Activision's favor

The high engagement trends with video games appear to be sticking around so far in 2021, according to data from TwitchTracker that tracks viewership trends on Amazon's popular game streaming platform.

The average monthly concurrent viewers on Twitch hovered around 2.9 million in the first quarter, which is nearly double the level in Q1 2020.

The Twitch viewership trends are noteworthy because two of Activision Blizzard's top franchises -- Call of Duty: Warzone and World of Warcraft -- are two of the most-watched games on Twitch.

Is this a good time to buy Activision stock?

It's impossible to know how the stock will respond to earnings. Something could always pop out of the report that catches investors by surprise, either to the positive or negative side.

That said, Activision Blizzard has leading franchises in an industry that has continued to grow for decades. It has a deep pipeline of growth initiatives within its most popular franchises. Most notably, Diablo 4 and Overwatch 2 should be blockbuster releases when they arrive in a few years.

Regardless of what happens after earnings, I fully expect the stock to be worth more in five years than where it trades today. Even if there is a post-earnings pop, this stock should be hitting new highs for years to come, providing investors plenty of time to build a position.