Please ensure Javascript is enabled for purposes of website accessibility
Log In Help Join The Motley Fool
Free Article Join Over 1 Million Premium Members And Get More In-Depth Stock Guidance and Research
By Zhiyuan Sun - May 4, 2021 at 8:31AM

America's top shopping mall operator's plans to transform itself should reap dividends in the long run.

Due to the ever-soaring popularity of e-commerce, about 25% of America's shopping malls face extinction over the next three to five years. Decades of over-construction made the commercial real estate industry sensitive to a drop in physical retail demand. According to analysts' estimates, only one quarter of the 1,100 shopping malls in the country are needed to serve consumers.

In a turbulent sector where weaker players could go bankrupt, it's always good to go long on the firm with the biggest market share. That place goes to Simon Property Group (SPG 3.12%). The real estate investment trust (REIT) owns or holds interest in 203 commercial properties, including malls, premium outlets, and other retail properties, across the country's most densely populated areas.

Not only does the firm have an ambitious turnaround plan, but its stock is trading at a bargain. Here are a couple of reasons why Simon Property Group can continue to be a fantastic income-generating stock going forward. 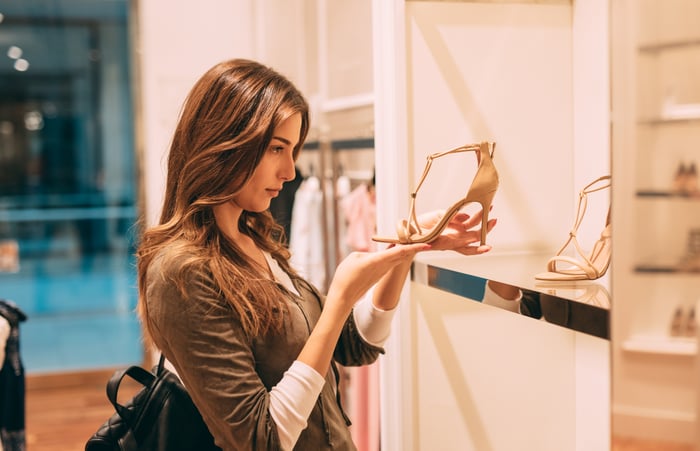 The first is its plan to transform its properties -- at least some of them. The company is betting big on turning some of its best malls into integrated community centers, rather than just places where people come to shop.

New constructions include hotels, restaurants, gyms, office buildings, NHL skating rinks, and multi-family residences within or attached to the malls themselves. The firm is also transforming its mall space so they can accommodate essential services like clinics, churches, grocery stores, or even entire schools.

Some of the key projects undergoing transformation as "mixed-use destinations" include the Phipps Plaza in Atlanta, GA, Northgate in Seattle, WA, and Brea mall in Orange County, CA. It must be noted that management is identifying the right properties on a case-by-case basis.

Furthermore, Simon Property Group is in talks with Amazon (AMZN 3.53%) to turn its empty Sears and JCPenney stores into e-commerce fulfillment warehouses for the former. The real estate developer's efforts to redevelop its shopping malls have already paid off. Last year, it spent $400 million on refurbishing, yielding a solid 8% cash-on-cash yield.

Fuelling Simon's future plans are rock bottom interest rates. Right now, the company has over $26.7 billion in mortgage and long-term debt. The average interest rate on those liabilities, however, amounts to just 2.94%. In January, the company raised an additional $1.5 billion in debt financing at really low rates of 1.75% to 2.2%. Recently, it also raised 750 million euro in a debt offering at an even lower 1.125%. Cheap debt allows the company to take on additional mortgages at low risk and refinance existing liabilities.

Can Simon pull it off?

Simon Property Group is probably the only REIT that can pull this off due to its capitalization. Last year, the company couldn't operate for one-fifth of the year's shopping days. It also had to pay $700 million in local property taxes with no relief for days offline whatsoever. Moreover, Simon Property Group pays about 10 times more in property taxes than nearby e-commerce fulfillment centers due to its larger size, meaning it is already competing on an unequal footing.

Despite such duress, the company still generated $9.11 per share in funds from operation (FFO). It was more than enough to sustain its $6 dividend per share payout, which amounts to an impressive annual yield of 4.5%. Although its FFO went down from $12.04 a share in 2019, Simon Property Group estimates it can recover some losses and generate up to $9.75 in FFO this year.

Even during the darkest days of the pandemic, the company's vacancy rate amounted to less than 10%. After over $13 billion in debt and equity infusions, the firm is more capitalized than ever. It has close to $32 billion in cash, investment equity, and net property value to offset the approximately $26 billion in debt and mortgages discussed earlier.

Overall, its stock is still relatively cheap at 34 times earnings than the average REIT stock's 50 times earnings. It survived the COVID-19 pandemic in-tact while many of its competing locations fell out of business. Going forward, it is the arguably the only shopping mall operator in the country that is well-capitalized to transform its shopping malls into recreational/essential service mega-centers the community will love. For these reasons, give Simon Property Group stock a chance.