Please ensure Javascript is enabled for purposes of website accessibility
Log In Help Join The Motley Fool
Free Article Join Over 1 Million Premium Members And Get More In-Depth Stock Guidance and Research
By Danny Vena - May 5, 2021 at 7:58PM

MercadoLibre (MELI -5.30%) delivered triple-digit growth to kick off 2021, marking its fourth consecutive quarter of year-over-year revenue growth over 100%. The Latin American e-commerce and digital-payments leader grew revenue to $1.4 billion, up 158% year over year in local currencies.

The results were driven by online retail that soared 139%, while fintech revenue from its digital-payments offering -- Mercado Pago -- jumped 72%. It's worth noting that both segments accelerated sequentially, fueled by explosive growth in its three top markets, Argentina, Brazil, and Mexico, which grew revenue by 223%, 139%, and 148%, respectively. 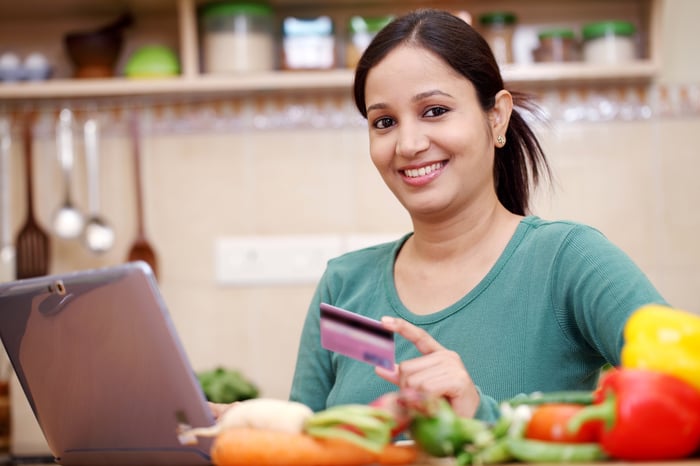 Many of MercadoLibre's underlying metrics were equally impressive. Gross merchandise volume (GMV), or the total value of products sold on its platform, grew to $6.16 billion, up 114%, accelerating from 108% growth in the fourth quarter. The digital-payments business grew even faster, with total payment volume (TPV) of $14.7 billion, up 129%, while the number of payment transactions topped 630 million, up 117%. Off-platform payments continued to fuel growth, up 136%.

The company's gross profit margin slipped to 42.9% from 48% in the prior-year quarter, driven by growth of its first-party sales and the expansion of its shipping business.

MercadoLibre's loss widened to $44 million, which requires context. If not for a one-time $49 million charge to extinguish existing debt, the company would have generated a profit.

New users continue to flock to the company's e-commerce and fintech offerings. Unique active users grew 62% year over year to 70 million, while the number of items sold jumped to 220 million, up 110%. Mercado Envios, its shipping solution, continued its rapid expansion, as items shipped surged to 208 million, up 131%.

MercadoLibre said it purchased $7.8 million in Bitcoin as part of its "treasury strategy."