Please ensure Javascript is enabled for purposes of website accessibility
Log In Help Join The Motley Fool
Free Article Join Over 1 Million Premium Members And Get More In-Depth Stock Guidance and Research
By Eric Volkman - May 5, 2021 at 7:21PM

T-Mobile US (TMUS 0.07%) was a telecom sector star Wednesday after it delivered a very encouraging earnings report.

The big carrier's first quarter saw it book total revenue of $19.8 billion, up 78% from the year-ago result of $11.11 billion. While this was positively affected by the company's consolidation of ex-rival Sprint, it was still higher than the consensus analyst estimate of $18.9 billion. Another big factor in the rise was total net additions of 1.4 million, which the company didn't hesitate to point out was best in the industry. 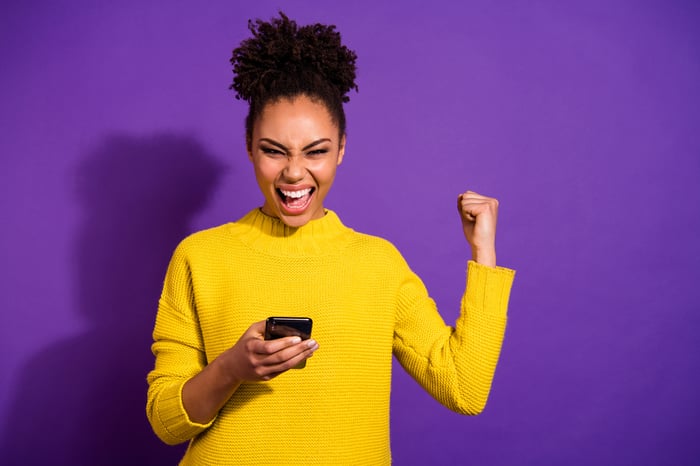 As for profitability, net income -- burdened by costs related to the Sprint integration -- slid by nearly 2% to $933 million, or $0.74 per share. Prognosticators, however, were expecting significantly less; on average, they were modeling only $0.57.

More encouragingly, citing the "meaningful progress" it has made fusing Sprint's operations into its own, T-Mobile slightly raised its full-year 2021 estimate for the merger's synergies to a range of $2.8 billion to $3.1 billion (formerly $2.7 billion to $3.0 billion). Roughly half of those estimated savings should come from reductions in sales, general, and administrative costs.

The company also hiked its overall guidance for the year for selected metrics. Postpaid net customer additions should be 4.4 million to 4.9 million, an increase from its preceding estimate of 4.0 million to 4.7 million. The free cash flow estimate also got a boost to $5.1 billion to $5.5 billion (previously $4.9 billion to $5.4 billion).

Not surprisingly, T-Mobile was an investor hit following the earnings release. Investors bid the stock up by 4.4% on the day, crushing the generally flat performance of the S&P 500 index.