Please ensure Javascript is enabled for purposes of website accessibility
Log In Help Join The Motley Fool
Free Article Join Over 1 Million Premium Members And Get More In-Depth Stock Guidance and Research
By Matthew DiLallo - Updated May 6, 2021 at 11:18AM

The global infrastructure company is well positioned to benefit from continued economic expansion.

Brookfield Infrastructure (BIP -0.10%) (BIPC 0.55%) operates assets crucial to supporting the global economy. While last year's pandemic-driven slowdown was a headwind for the company, the global rollout of vaccines is giving the economy a booster shot. That was evident in Brookfield's first-quarter results, which soared despite the impact of asset sales and foreign exchange fluctuations.

Brookfield Infrastructure's FFO soared more than 20% during the first quarter, powered by strong results across all four of its business segments: 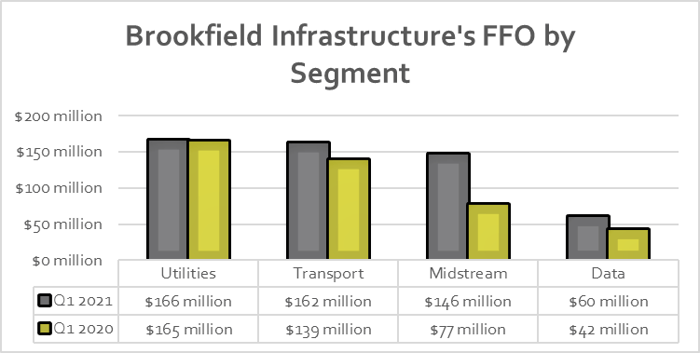 Earnings from Brookfield's utilities increased by less than 1% during the quarter. But that was mainly due to foreign exchange fluctuations, without which they would have increased 7% year over year. Driving this segment's growth was inflation-related contract rate increases and the completion of $375 million of expansion projects over the past year, which more than offset the sale of two businesses in 2020.

Transportation-related earnings jumped nearly 17%. The main driver was the gradual reopening of the global economy, which boosted volumes across its rail and ports businesses. Rail volumes in Australia and Brazil increased nearly 10%, while container volumes at its ports rose almost 20%. This growth helped offset the impact of asset sales and foreign exchange fluctuations.

Earnings from Brookfield's midstream segment surged nearly 90%. Fueling that growth was strong demand and the completion of an expansion project on its U.S. gas pipeline. The company's gas storage business also benefited from extreme weather conditions in the U.S. during the period.

Finally, earnings from its data segment jumped more than 40%. The main driver was the acquisition of a portfolio of telecom towers in India that closed last August. The company also benefited from 7% organic growth, powered by inflationary price increases and the expansion of its French telecom business. 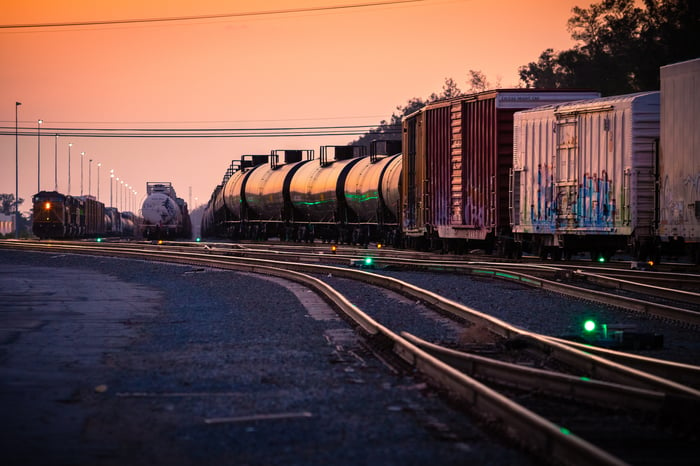 Brookfield continued working on its capital recycling strategy during the quarter. It's in the process of selling three mature businesses, which will give it the additional financial flexibility to make new investments.

Along with its partner, Kinder Morgan (KMI 0.54%), the company completed the sale of a 25% interest in their U.S. gas pipeline business during the quarter. Brookfield received $412 million in cash for its 12.5% share. Since Brookfield and Kinder Morgan took control of the business in 2015, they've recouped 75% of their initial investment, with this partial sale locking in a 21% internal rate of return (IRR).

Brookfield also continued to advance the sale of its district energy businesses. It expects the Canadian deal to close in the next month, with the U.S. operations following shortly after that. It expects to receive $950 million from the sales, six times the capital it has invested over the last eight years.

Finally, it recently agreed to sell its portfolio of smart meters in the U.K. It expects to receive about $350 million from the sale, which is a 58% IRR.

Meanwhile, the company is also working on new investment opportunities. It agreed to acquire the remaining 10% interest in a Brazilian gas transmission business that it didn't already own from that country's national oil company Petrobras (PBR 8.96%). It funded that purchase with additional borrowings on the gas pipeline operations, preserving its corporate liquidity for other opportunities.

One other deal it's working on is a $5 billion takeover attempt of Canadian midstream company Inter Pipeline (IPL). Brookfield will invest $2 billion in cash and stock to acquire that company if it's successful. However, the two companies are at odds over price, which could derail this takeover attempt.

Brookfield is working on additional asset sales that could bring in another $1 billion to $1.5 billion over the next year. Meanwhile, it's also pursuing other smaller acquisitions as well as larger-scale transactions. Even if it's unsuccessful in securing any needle-moving deals, Brookfield believes it's in a strong position to benefit from a prolonged period of economic expansion coming out of the pandemic.

Brookfield is benefiting from a strengthening economy, which is driving higher volumes across its infrastructure assets. It sees this trend continuing for the foreseeable future, powered by pent-up demand and low interest rates. Because of that, it should deliver strong results for the rest of the year, with upside potential if it's successful in taking over Inter Pipeline or completing another large-scale transaction.