Please ensure Javascript is enabled for purposes of website accessibility
Log In Help Join The Motley Fool
Free Article Join Over 1 Million Premium Members And Get More In-Depth Stock Guidance and Research
By John Ballard - May 6, 2021 at 9:16AM

This growth stock has fallen 40% year to date. Is it a buy ahead of earnings results?

Shares of Unity Software (U -1.84%) fell sharply over the last few months, as some investors shifted from growth stocks into better values. Investors will get their chance to find out if the sell-off is justified when Unity reports earnings next week.

Unity is scheduled to report first-quarter results on Tuesday, May 11, after the market closes. Let's review what investors should expect and whether the stock is a compelling buy.

Unity is riding a nice tailwind

Unity's revenue growth has been fairly consistent, growing 42% in each of the last two years through 2020. Unity's widely used game engine, which powers 71% of the top 1,000 mobile games, continues to generate robust revenue growth from game creators. 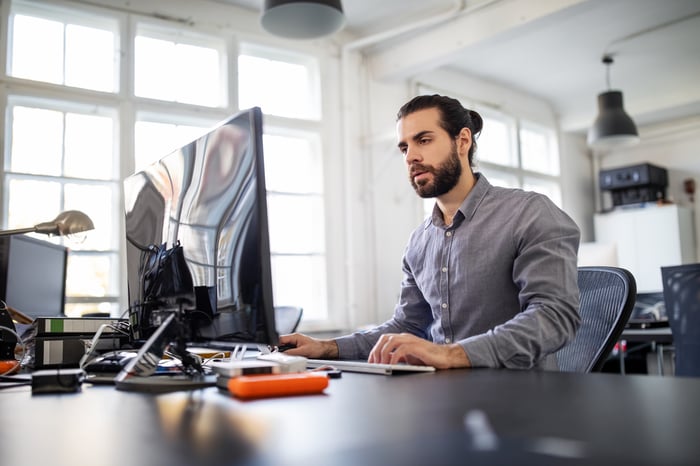 The foundation of Unity's business is its Create Solutions segment, which includes subscriptions to content creation software. In 2020, revenue from this segment grew 37% to reach $231 million. Unity offers a range of subscription plans that provide the tools to create video games or work on 3D content in other fields, such as architecture, robotics simulation, and self-driving cars.

"On the revenue side, we're entering the year with lots of momentum across both gaming and new verticals," CFO Kim Jabal said during the fourth-quarter earnings call.

The growth in new verticals, or non-gaming opportunities, is a key trend to watch. Out of Unity's total customer base of 793 in 2020, 13% were from non-gaming industries, and that's up from 8% just a few quarters ago.

Unity's largest segment is also its fastest-growing business. Revenue from Operate Solutions grew 61% last year to reach $471 million. Unity makes money in this segment through revenue-sharing and usage-based services with its customers. It offers cloud-hosting services for multiplayer video games and monetization tools for game creators, so the more players engage with titles running on Unity's software, the more revenue Unity is able to generate over time.

Across all the games that are built on Unity's software, there were 2.7 billion monthly active users in Q4 -- an increase of 63% year over year. While this level of growth probably won't continue following the pandemic, management is seeing new players spending more on in-app purchases than existing users, which is good news for Unity's business.

"These record results don't directly translate to revenue in many cases, but they are indicative of the strength of our franchise and the ecosystem we support," CEO John Riccitiello said.

Management expects first-quarter revenue to increase between 26% to 32% year over year. This is lower than 2020 but is consistent with management's long-term goal to grow revenue by an annualized rate of 30%.

Although it's a small headwind, investors should be aware of the near-term effect of Apple's recent efforts to improve user privacy on iOS. Unity generates a portion of its Operate Solutions revenue from mobile ads, such as when a user downloads an app through an advertisement. Apple's latest iOS update could curtail those opportunities since it requires apps to ask the user permission to track them across other apps and websites.

Unity has performed up to its long-term growth expectations through 2020. Its forward guidance looks solid, considering the difficult year-over-year comparisons it will be up against this year.

The weak stock performance can be blamed on its high valuation, on top of management's outlook for lower revenue growth in 2021. Even after the recent drop in price, the stock still commands a steep price-to-sales ratio of 27.

Still, Unity has a massive growth opportunity. Management estimates its current addressable market to be $29 billion, and that could be conservative depending on the extent that Unity expands its platform to other use cases outside of gaming, where it's already experiencing momentum.

It's impossible to tell where the stock goes after earnings. Sometimes growth stocks fall even when earnings results are positive. But over the long term, Unity has a bright future, so I would look at the recent drop as a buying opportunity.

Is It Too Late to Buy Unity Software Stock?

Unity's Major Move Has 1 Top Competitor Shaking in Its Boots

Unity Is On the Right Path -- Even Without AppLovin

Unity Stock: Why to Be Bullish After Mediocre Earnings