Please ensure Javascript is enabled for purposes of website accessibility
Log In Help Join The Motley Fool
Free Article Join Over 1 Million Premium Members And Get More In-Depth Stock Guidance and Research
By Jeremy Bowman - May 6, 2021 at 9:43AM

Investors continue to turn away from SPACs.

Shares of Nikola (NKLA 2.09%) continued their downward drift last month as the special purpose acquisition company (SPAC) bubble continued to deflate, dragging down the maker of hydrogen and electric vehicles. Nikola's head of fuel cell development stepped down at the beginning of the month, weighing on the stock, but investors did receive some good news when the company said it would begin installing hydrogen fueling stations in California.

According to data from S&P Global Market Intelligence, the EV stock finished April down 17%. As you can see from the chart below, the stock declined for most of the month, before reversing course when the fueling station news broke. 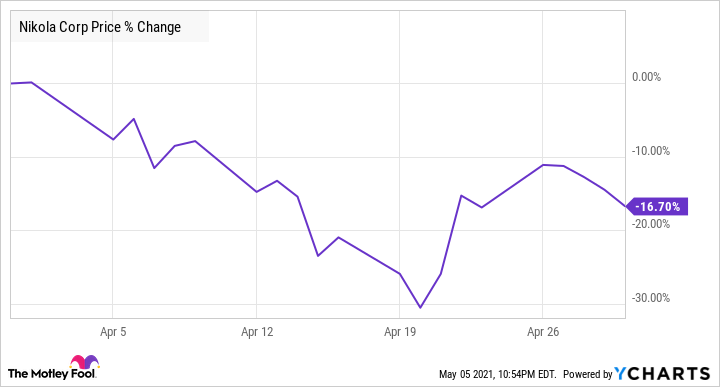 Nikola has been a poster child for the SPAC boom over the past several months. These are companies taken public by a shell company, many of which would have struggled to go public through a traditional IPO process. Nikola, which went public with no revenue or even a viable product, is a prime example of SPAC bust as the stock has plunged since its peak nearly a year ago. It's been mired in scandals, including that it faked an operational vehicle, which forced the founder to step down. SPACs in general have been getting more scrutiny in recent weeks, and investors seem to think that many are overvalued, built on little more than lofty promises.

Nikola stock also took a dive on April 7, falling 7%, after Bloomberg reported that the company's executive vice president of technology, hydrogen, and fuel cells had left the company on April 1.

Shares steadily declined through April 20 as Wedbush also slashed its price target from $25 to $13, citing the poor track record in the company's execution thus far. The stock briefly dipped below $10 or the level at which parent company VectoIQ went public in 2018. However, Nikola jumped on April 22 on news that it would team up with TravelCenters of America to install two hydrogen fueling stations in California by 2023.

As a prerevenue company, Nikola remains a crapshoot and is likely to be volatile. The stock has already fallen 10% through the first three sessions in May ahead of its first-quarter earnings report. Since the company doesn't have any revenue yet, the report doesn't carry the usual relevance, but it will provide investors with an update on the company's progress.

After several months of declines, though, the market is clearly skeptical about the stock's prospects.