Please ensure Javascript is enabled for purposes of website accessibility
Log In Help Join The Motley Fool
Free Article Join Over 1 Million Premium Members And Get More In-Depth Stock Guidance and Research
By Beth McKenna - May 7, 2021 at 9:47AM

The home exercise company reported strong fiscal Q3 results, but the full impact of the damage to its brand stemming from the Tread+ safety issue is a big unknown.

Peloton Interactive (PTON 13.60%), the leading maker of connected home-exercise equipment, reported robust fiscal third-quarter 2021 results (which cover the first calendar quarter of 2021) after the market close on Thursday, May 6.

Shares immediately fell in Thursday's after-hours trading session and were down about 4.5% when the earnings call started at 5:00 p.m. EDT. We can probably attribute this initial reaction largely to short-term traders ditching the stock in advance of the call, as it was a given that management's fiscal fourth-quarter outlook would be dimmer than many investors were initially expecting. This was evident on Wednesday when the stock plunged following the company's announcement that it was recalling both of its treadmill models and pausing their sales while it remedies their known safety problems.

By the end of the earnings call, however, Peloton stock was up, and it closed Thursday's after-hours session with a gain of 5.6%. The reason for the reversal was likely that some investors were relieved the company's guidance wasn't worse.

In 2021, shares of Peloton (which held its initial public offering in September 2019) are down about 45% through Thursday's regular trading session. The stock was already under pressure before the Tread+ safety issue exploded in the news in mid-April, as some investors are concerned about the company's ability to keep growing rapidly in a post-pandemic world. (Investors just learned about the safety concern with the lower-priced Tread on Wednesday. The screws attaching the monitor to the machine can loosen, resulting in the monitor falling off.) 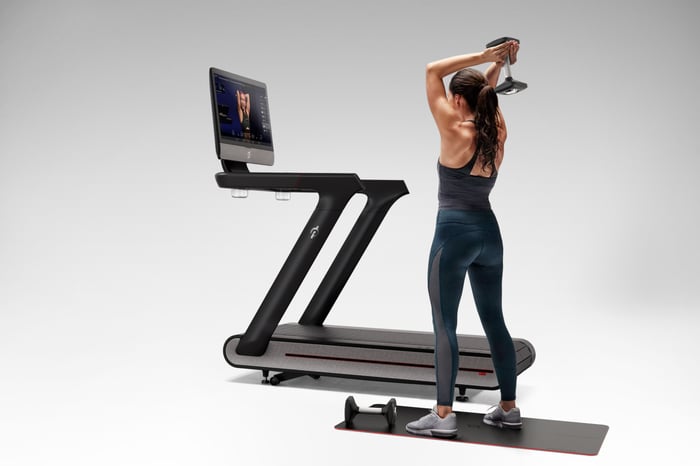 Revenue growth was driven by a 140% rise in product revenue to $1.02 billion and a 144% increase in subscription revenue to $239.4 million. The number of connected-fitness subscribers grew 135% year over year to 2.08 million, and average net monthly churn remained low at 0.31%.

The company used $151.2 million in cash running its operations during the quarter. It ended the period with $2.69 billion in cash, cash equivalents, and marketable securities.

Peloton said in its letter to shareholders that it has gotten its average order-to-delivery wait times for its original bike model, Bike, back to pre-pandemic levels. On the earnings call, management said it's aiming to get its wait times for Bike+ to within about two weeks by next quarter.

For fiscal Q4, the company expects revenue of $915 million, which includes a contribution of about $60 million from Precor, the commercial occupancy-focused fitness company that Peloton acquired in April. This would represent organic growth (excluding the Precor contribution) of about 41% year over year and a decline of about 32% from the third quarter. The Q4 revenue outlook anticipates a negative impact of $165 million stemming from the treadmill safety concerns.

Management said on the earnings call that its Q4 outlook is based on the assumption that about 10% of Tread and Tread+ owners will opt to participate in the recalls and obtain a full refund of their money.

In addition, management lowered its full-year fiscal 2021 revenue outlook to $4.0 billion from its prior outlook of $4.075 billion.

Peloton turned in another super quarter, as widely expected. And the stock's action during Thursday's after-hours trading session suggests that some market participants were likely expecting the company's Q4 outlook to be worse.

That said, caution is still warranted for long-term investors. Management can only guess at how many treadmill owners will want a refund, and the product liability lawsuit situation also remains a question mark.

The biggest long-term risk is that damage to the Peloton brand could persist. It should help that management apologized for its handling of the Tread+ safety issue. Nonetheless, the company will have to overcome the impression that it issued the Tread+ recall, which it resisted doing for several weeks, only due to intense pressure. That is, after various consumer groups and politicians backed the Consumer Product Safety Commission's stance that the product should be recalled because it poses a serious risk of injury to small children and pets.

Peloton has the advantage of being the first mover in the fast-growing connected home-fitness market. It also has many "members" who love the company to the point of being fanatical. But its handling of the Tread+ safety issue presents an opportunity for competitors to gain a stronger foothold in the market.

At this point, I'm neutral on Peloton stock as a long-term investment. Currently, there are other stocks that also have strong upside potential but less downside risk.