Please ensure Javascript is enabled for purposes of website accessibility
Log In Help Join The Motley Fool
Free Article Join Over 1 Million Premium Members And Get More In-Depth Stock Guidance and Research
By Neha Chamaria - May 9, 2021 at 9:04AM

These gold stocks have big plans to make boatloads of cash, which should reward investors.

Gold prices have declined steadily this year after a heady run-up in 2020. That's driven some investors out of gold stocks, but those in the know will consider such times as opportunities to park some money into an asset that's served well as a hedge during stock market turmoil.

Gold stocks are, in fact, the best way to invest in gold, and with earnings season in full swing, it's the perfect time to hunt for winners worth your money. If you're wondering where to start, here are three top gold stocks with incredible growth potential to buy now.

Unlocking growth from the big acquisition

Kirkland Lake Gold (KL) kicked off 2021 on a solid note and was among the few gold mining companies that topped its production and cost guidance in the latest quarter. Kirkland produced 302,847 ounces of gold in Q1, exceeding its guidance of 280,000 ounces at the midpoint. To top that, Kirkland's all-in-sustaining cost (AISC) was $846 per ounce of gold sold versus management's AISC guidance of around $1,000 an ounce.

There are two things worth noting here. First, a first-quarterly record number of tonnes were processed at the Detour Lake mine in Q1. Detour Lake, a mine Kirkland acquired in January 2020, is Canada's second-largest gold mine and holds the key to Kirkland's growth. Second, ore grade at its Fosterville mine in Australia, where production is on the decline, exceeded management's expectations. 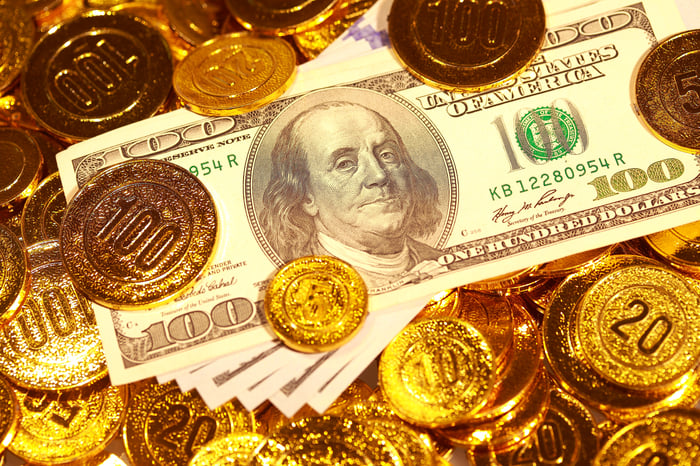 There's a lot more in store which is where the stock's appeal lies. To start, Kirkland expects to end 2021 with AISC of only $790-$810 per ounce sold, which should boots especially if gold prices maintain momentum.

Also, Kirkland has lined up extensive exploration plans for all three mines, particularly Detour Lake, and expects to spend a record $170 million-$190 million in capital expenditure this year to boost production. It hugely helps that Kirkland also has one of the strongest balance sheets in the industry -- it's a low-debt, positive free-cash flow, dividend-paying gold miner. There's a lot to like here, and with a stronger expected second-half ahead, you'd want to pay serious attention to this gold stock.

Big cash is on its way for you

Newmont Goldcorp (NEM -0.56%) shares have been very volatile in the past one year, but investors seem to have sensed value in the gold mining stock in recent weeks, as evidenced by its near-17% rally since mid-March. Rightfully so, as Newmont's production in recent months were hit because of COVID-19 pandemic shutdowns, but its growth story remains intact. Newmont's stock price has typically mirrored FCF growth, which is exactly why it's such an appealing stock to own now. Let me explain. 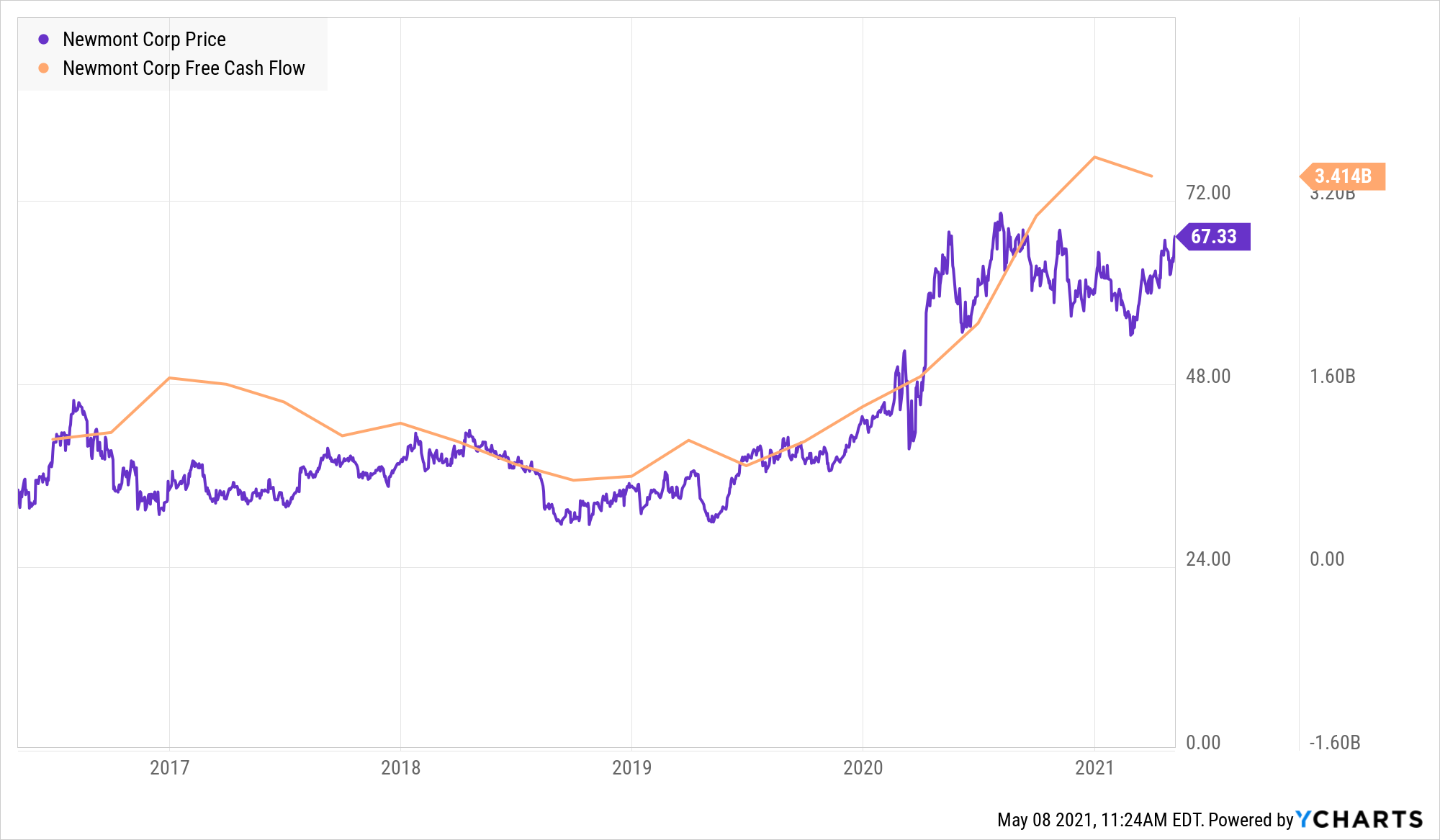 Here's the real deal: Even if gold prices were to slump to $1,200 per ounce, Newmont could generate a whopping $3.5 billion in annual FCF over the next five years at an average annual GEO production of 8 million ounces. And for every $100 increase in gold prices, it could earn $400 million in incremental FCF. That's huge, and it's hard to find another gold miner with such incredible cash-flow visibility. For perspective, Newmont generated a record $3.6 billion in FCF in 2020 at a realized gold price of $1,775 an ounce.

Cash flow is the key to survivability, growth (via mergers and acquisitions), and success for gold miners; and Newmont's potential cash-flow growth is hugely promising. Moreover, FCF growth should also mean bigger dividends, as Newmont is paying out a base dividend of $1 per share at gold prices of $1,200 an ounce and 40%-60% of incremental FCF earned at higher gold prices. Again, that's among the most stable dividend policies among gold miners, and Newmont's dividend yield at 3.3% also among the best, making it a top gold stock to buy.

The only gold stock that thrives at any gold price

Franco-Nevada (FNV 0.10%) is one of the safest stocks to bet on gold for a simple reason: The miner can earn hefty margins even in a low-gold price environment, and mint loads of money when gold prices rise. That's because Franco-Nevada isn't a miner, but a gold streaming and royalty company. So it strikes agreements with gold miners to buy gold from them at predetermined prices and percentages in return for funding them upfront. Since the purchase price is usually set at levels significantly below gold spot price, Franco-Nevada wins in any kind of a gold-price environment.

To illustrate, I've pitched Franco-Nevada against the two gold mining stocks discussed in this article to show you how the former has consistently earned higher margins. 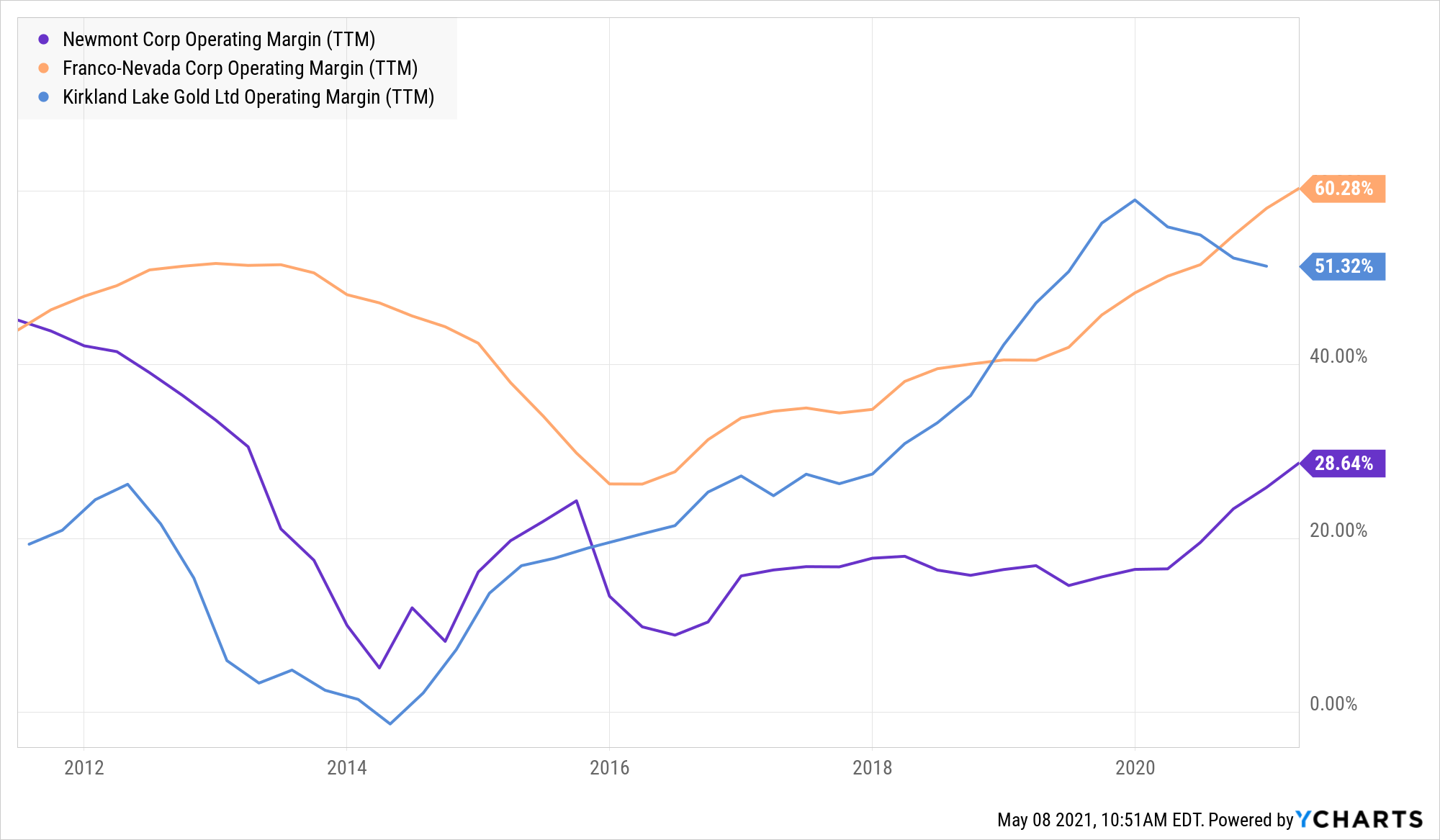 I'll cut to the chase and give you four reasons why Franco-Nevada is such an appealing gold stock right now:

Franco-Nevada also has an oil and gas royalty business, but it's only a small top-line contributor for now. With a core gold portfolio of diversified streams on some of the world's largest mines under operation as well as under development, Franco-Nevada doesn't have to worry about revenue growth. As revenues grow, so should its cash flows, dividends, and stock price.