Please ensure Javascript is enabled for purposes of website accessibility
Log In Help Join The Motley Fool
Free Article Join Over 1 Million Premium Members And Get More In-Depth Stock Guidance and Research
By Will Healy - May 9, 2021 at 4:33PM

These companies in e-commerce and fintech look set for success.

Many investors look at Amazon and wish they had bought its stock when the company sold only books. And they will often set their sights on finding the "next Amazon."

While finding superstars at an early stage is difficult, investors might have better success identifying companies that have experienced massive revenue increases and are on their way to taking the lead in their respective niches. Let's take a look at two such companies: Etsy (ETSY 3.29%) and StoneCo (STNE -0.70%).

Before deciding whether to invest your $5,000 in these stocks, make sure you're ready to invest. That means you have paid your bills, set up your emergency fund, and won't need the $5,000 for the next few years. 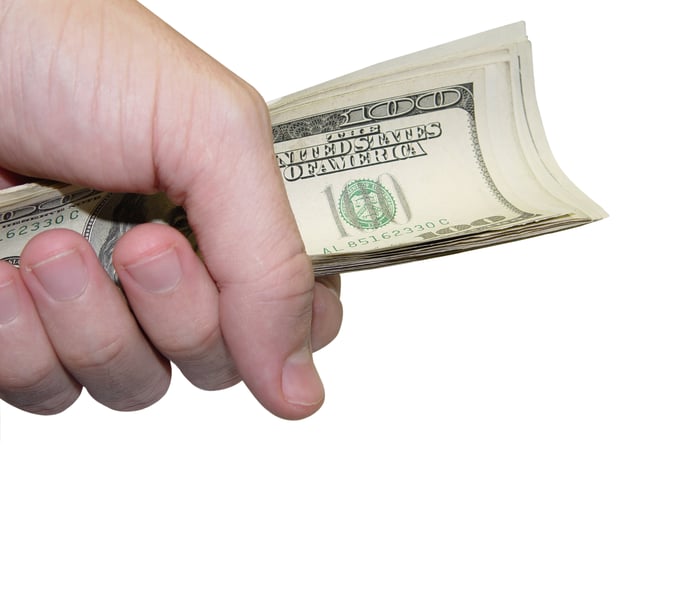 Etsy is one stock that could craft outsized returns. It's more than just a high-tech selling platform for low-tech craftspeople. Its advantage comes from fostering a sense of community as it brings together artisans and connects them with customers who want specialty products. Also, to bolster that community, it will only allow artisans or merchants of vintage products or collectibles to sell on its site.

Etsy's resources include a specialized search engine designed to link businesses with millions of prospective customers. It also employs a support staff that answers questions and offers business tips. The company even lobbies government bodies on behalf of the general needs of its sellers, a benefit most small businesses cannot otherwise afford.

Etsy benefited as the pandemic forced more commerce online. For 2020, revenue climbed 111% while gross merchandise volume (GMV) surged by 107%. These trends accelerated through the first quarter of 2021. During that period, GMV climbed 132% while revenue moved higher by 142% to $551 million. That helped net income grow to about $144 million, an increase of nearly 1,050% from year-ago levels of just under $13 million. Net income benefited as the cost of revenue grew by just 73%. 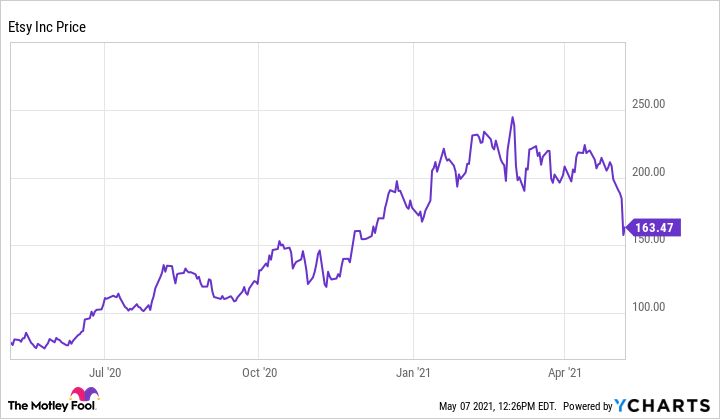 Despite this surge, Etsy sports a price-to-earnings ratio of around 62. Its valuation has remained consistent with historical levels, indicating the stock grew about as fast as its earnings. It also comes in significantly lower than Shopify's earnings multiple of around 88. Shopify also helps businesses sell online.

Etsy expects the current quarter's revenue growth rate to fall to the 15%-25% range as consumers return to more frequent in-store shopping. It has not issued full-year guidance, but management said in February that it expects revenue growth to "decelerate" along with "the rest of e-commerce" in the near term.

However, once the economy adjusts, growth will likely accelerate again. In the latest quarter, habitual buyers -- buyers who bought on at least six different days and spent a minimum of $200 during the last year -- increased 205%. Since Etsy works to foster direct seller connections with buyers, some of those will likely continue well after the pandemic.

CEO Josh Silverman said in the conference call with anlaysts that the company would continue hiring throughout the year.

Finally, Etsy's revenue growth for 2019, before the pandemic became a factor, came in at 36%. If Etsy can settle into a long-term growth rate at or near that level, it could easily position the stock on an upward trajectory over time.

Investors wanting to profit from fintech should look to StoneCo. In Brazil, where StoneCo operates, it tailors its products to reach consumers who otherwise use cash only.

While companies such as MercadoLibre and PagSeguro can also reach such customers, StoneCo offers a unique competitive advantage through personal service and a "no bureaucracy" approach not offered by peers. It opens localized hubs where needed and quickly trains a sales force that can personally integrate clients into StoneCo's ecosystem. In an interview with S&P Global Market Intelligence, CEO Thiago Piau talked about expanding into other Latin American countries within two or three years, a move that could stoke revenue growth for years to come.

Even as COVID-19 ravaged Brazil, StoneCo managed to increase 2020 revenue by 29% from the 2019 level. Net income grew by only 4% during that period as increased marketing costs, technology costs, and advisory costs stemming from a merger cut into the company's profits.

Still, investors should note that PagSeguro's net income fell 6% in 2020.

With StoneCo's 2019 revenue and net income rising by 63% and 164%, respectively, rapid growth could resume once the pandemic recedes.

StoneCo has also outpaced PagSeguro's stock gains. StoneCo stock increased by around 150% over the last year, compared with 75% for PagSeguro. With that surge, it probably comes as no surprise that StoneCo sports a higher P/E ratio. Its multiple stands at just over 110 versus a valuation of around 55 for PagSeguro.

StoneCo's competitive advantage and faster revenue growth appear to help it justify that higher multiple. As it continues to draw more clients with its customer-service-centered business model, StoneCo stock looks set to continue to move higher over time. 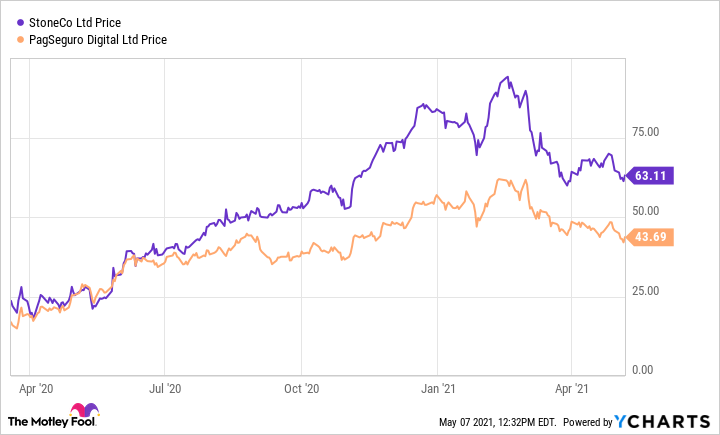