Please ensure Javascript is enabled for purposes of website accessibility
Log In Help Join The Motley Fool
Free Article Join Over 1 Million Premium Members And Get More In-Depth Stock Guidance and Research
By Eric Volkman - May 10, 2021 at 7:57PM

The quarter wasn't necessarily a bad one, but a big new competitor looms.

Marijuana stock Curaleaf (CURLF 1.20%) didn't get a lot of investors high Monday, despite delivering better-than-expected revenue for its inaugural quarter of 2021.

For the marijuana company's first quarter, the figures for which were published that morning, it booked $260 million in revenue, 170% higher on a year-over-year basis and 13% better than the fourth-quarter 2020 number. It was also a new all-time Q1 record for Curaleaf.

The multi-state operator's (MSO) net loss was $17.2 million, or $0.03 per share. That was slightly worse than the Q1 2020 deficit of just over $15 million, but a big improvement over the previous quarter's $35.1 million shortfall. On the marijuana industry's preferred profitability metric -- non-GAAP (adjusted) EBITDA -- Curaleaf earned $62.6 million, against the year-ago result of $20 million and Q4's $53.8 million. 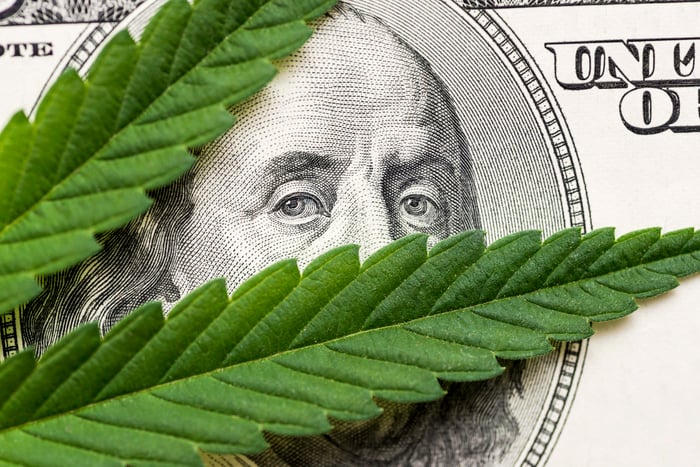 On average, analysts tracking the stock were expecting only $254 million in revenue; however, they thought the company would post a net loss of $0.01 per share.

But Curaleaf has a keen eye trained on the future. The company quoted its CEO Boris Jordan as pointing out that "The recent approvals of adult-use cannabis in New Jersey and New York, which are states where Curaleaf has a leading market share, will unlock vast new markets, worth an estimated $2.1 billion and $5 billion in sales, respectively."

Investors, however, might be more concerned that a giant competitor for Curaleaf is about to arise. Monday morning, Trulieve Cannabis (TCNNF 1.08%) and Harvest Health & Recreation (HRVSF) announced the former is acquiring the latter in a (relatively) massive $2.1 billion all-stock deal. The combined company will have 126 dispensaries under its wing, eclipsing Curaleaf's tally of 106.

This was likely the driving factor in Curaleaf stock's 4.3% fall Monday, against the S&P 500's decrease of only 1%.