Please ensure Javascript is enabled for purposes of website accessibility
Log In Help Join The Motley Fool
Free Article Join Over 1 Million Premium Members And Get More In-Depth Stock Guidance and Research
By Will Healy - May 10, 2021 at 10:18AM

eBay (EBAY 1.17%) had been a somewhat stagnant player in the e-commerce realm for the past few years, but it sprang back to life this past year amid a sudden interest in e-commerce during the coronavirus pandemic and a new CEO that took over in April 2020. Now, some investors wonder if the transformation will continue and what it will mean for the company's stock.

Admittedly, eBay could again languish in the near term as consumers begin to put the pandemic behind them and return to offline shopping. What eBay investors are asking is not necessarily what happens in the next few quarters, but whether management has leveraged the sales surge in 2020 to place itself on a long-term growth path.

The reemergence of eBay

Once a darling of the 1990s tech boom, interest in eBay fell in the 2000s as high fees, free listings on competing sites, and a platform many found difficult to use led to a loss of interest in the company and the stock. Moreover, the fact that one-time subsidiary PayPal (PYPL 0.09%) quickly became significantly larger than eBay following its public spinoff did not help its reputation. Despite its more recent improvements, PayPal supports a market cap more than seven times larger than that of eBay. 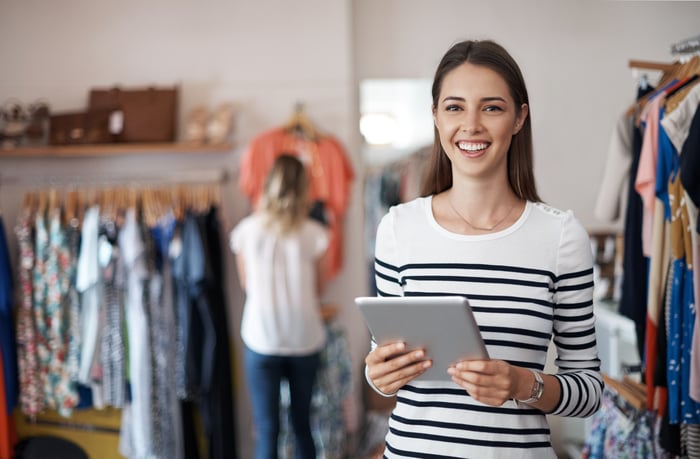 However, two factors have bolstered eBay over the last year. First, the lockdown effects brought on by COVID-19 meant online shopping benefited across the board as millions were asked to temporarily not shop in most stores. Second, Jamie Iannone was offered the CEO position. Iannone was a former eBay executive who began e-commerce initiatives at Walmart (WMT 5.70%) eCommerce and Sam's Club.

In his CEO role at eBay, Iannone has pushed what he described in the first-quarter 2021 earnings call as a "tech-led reimagination" of eBay. That led to redesigns of the website and the overall sales process. For example, he added QR coding to packing slips for more rapid pick-ups. Iannone also made it easier to list items on eBay. Features such as image-based listings reduced the time to list items by up to 75%.

eBay has also simplified digital payment through its Managed Payments platform. Buyers now have most of the more widely used digital wallets available to them. Hence, credit, debit, and PayPal are no longer the only payment options, and users will no longer be required to have a separate PayPal account. Additionally, eBay's system now manages claims and return processes on one platform. These changes have streamlined the sales process for both buyers and sellers.

The changing sales environment and the site improvements dramatically altered the financial outlook. In 2020, revenue increased 19% from the previous year while GAAP net income surged 68%.

In comparison, Walmart's e-commerce sales rose 79% in 2020, amid 9% overall revenue growth. In the same period, Amazon (AMZN -0.25%) reported 39% higher net sales (not including Amazon Web Services) in 2020. While eBay lagged its much larger rivals on e-commerce revenue growth, investors should also remember that eBay reported a 1% revenue increase in 2019 before Iannone took the helm.

Driven by a record gross merchandise volume of more than $27 billion, revenue in the first quarter of 2021 climbed 42% compared with the year-ago quarter. Moreover, eBay's GAAP net income rose to $569 million. This is a 32% surge from the same quarter last year when excluding a one-time, $3.1 billion boost from discontinued operations in 2020.

The income growth allowed eBay to generate $855 million in free cash flow during the quarter, a 65% increase from the same quarter last year. This helped the company cover $117 million in interest costs and $122 million in dividend payments. eBay can also more easily manage its debts as total debt levels fell from just under $7.8 billion a year ago to around $6 billion today.

Investors have taken notice, and even after a recent decline, eBay's stock price is up by just over 45% in the last 12 months. And although the price-to-earnings (P/E) ratio has climbed above the single digits, the earnings multiple of 14 keeps the valuation well under Walmart's P/E ratio of 30 and the 62 earnings multiple of e-commerce giant Amazon. 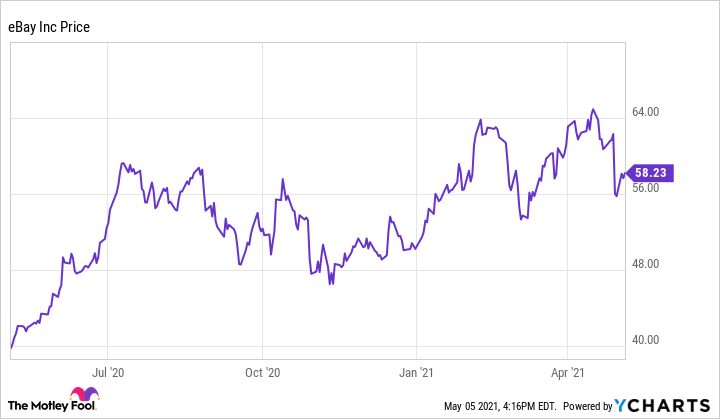 Nonetheless, the financials point to possible near-term struggles. The company's quarterly revenue projection of about $3 billion for the second quarter would amount to an approximate 3% increase over 12 months. Moreover, it did not make any yearly projections. Though many other e-commerce companies also refuse to release full-year forecasts, it speaks to the uncertainty surrounding that industry as consumers return to more offline shopping options.

Will eBay sustain its growth?

Despite the near-term doubts, the actions eBay took during the pandemic may warrant new investments. Indeed, as the pandemic wanes and society reopens, it could temporarily slow sales. But consumers were trending toward more shopping online more even before the pandemic. Iannone's approach has made eBay's site more user-friendly, increasing the likelihood that it will become more popular for sellers and buyers even with the pandemic's end.

This does not mean eBay will necessarily match the revenue increases of retail giants like Walmart (which is still early in its e-commerce transition and growing at a faster rate) or Amazon (which has always been a juggernaut and shows no signs of slowing). Nonetheless, at a P/E ratio of 14, this consumer discretionary stock still has some significant growth in it and is currently priced for value.