Please ensure Javascript is enabled for purposes of website accessibility
Log In Help Join The Motley Fool
Free Article Join Over 1 Million Premium Members And Get More In-Depth Stock Guidance and Research
By Leo Sun - Updated May 11, 2021 at 1:00PM

Wingstop and two other restaurant chains could be great investments as people start dining out again in a post-pandemic world.

Many restaurant chains have faced unprecedented challenges over the past year as the pandemic temporarily shut down and/or reduced their businesses. But as vaccination rates rise and infection rates decline, many value-seeking investors are charging back toward restaurant stocks as reopening plays. 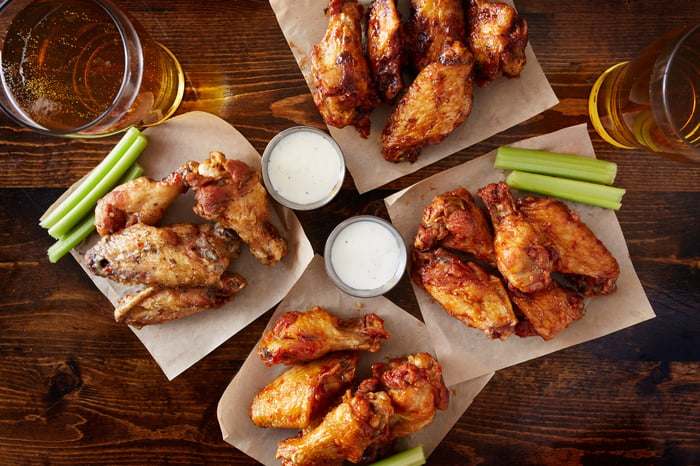 Wingstop remained resilient throughout the pandemic thanks to the expansion of its delivery channel, which generated over a quarter of its sales last year. Its domestic same-store sales rose 21%, it expanded its system-wide restaurant count by 11%, and its total revenue grew 25%.

Its heavy dependence on higher-margin royalty revenue and franchise fees propped up its margins, and its adjusted EBITDA increased 26%. Analysts expect its revenue and adjusted earnings to grow another 17% and 81%, respectively, this year, as the pandemic passes.

Wingstop's stock isn't cheap at about 80 times forward earnings, and its tiny forward dividend yield of 0.4% won't attract many income investors. It could also face a lot of near-term pressure from rising chicken prices.

Yet Wingstop has weathered similar headwinds in the past, and it still plans to open more than 6,000 restaurants over the long term. That confident outlook could easily justify its premium valuation.

Investors who think Wingstop is too expensive can consider buying shares of McDonald's (MCD -0.09%) instead. The Golden Arches trades at 25 times forward earnings and pays a forward dividend yield of 2.2% 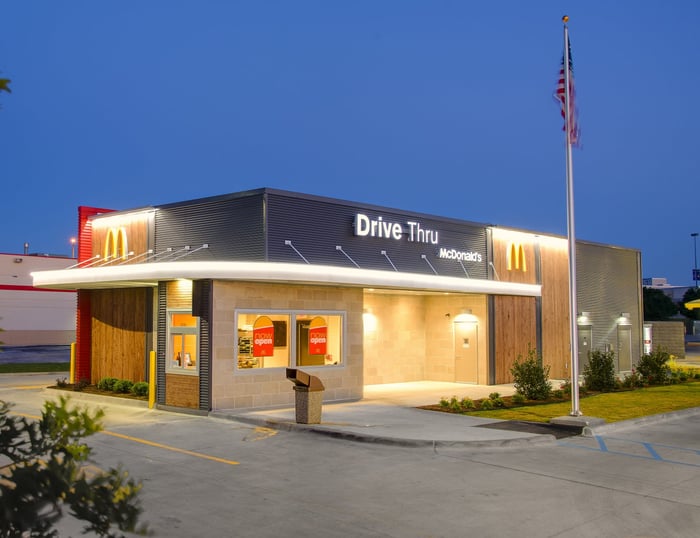 Most of McDonald's locations are also franchised. It ended 2020 with 39,198 franchised and company-operated restaurants, and it generated over half its revenue from franchising fees. Its store count rose 1% for the full year, even as the pandemic closed down its existing stores.

McDonald's suffered a much steeper slowdown than Wingstop during the pandemic. Its revenue fell 10% to $19.2 billion last year, as a 15% drop in its international same-store sales erased its 0.4% growth in the U.S. Its net income declined 22% to $4.7 billion as COVID-19 costs rose.

Yet analysts expect McDonald's revenue and earnings to grow 17% and 42%, respectively, this year as the crisis ends. Its ongoing investments in the "three Ds" (digital, delivery, and drive-thru technologies) -- along with new menu items like spicy Chicken McNuggets and a new chicken sandwich -- could drive that growth while widening its moat.

McDonald's has withstood many economic downturns since its IPO back in 1965, and it will likely remain an evergreen restaurant stock for decades to come.

Darden's (DRI -0.25%), the parent company of Olive Garden, LongHorn Steakhouse, Cheddar's, and other restaurant chains, took a big hit during the pandemic. In fiscal 2020, which ended last May, its revenue fell 8% to $7.8 billion, with an 11% drop in its blended same-restaurant sales, as its adjusted earnings tumbled 48%.

In the first nine months of fiscal 2021, Darden's revenue fell another 25% year over year to $4.9 billion as its same-restaurant sales continued to decline. Its earnings also dropped 43%.

Those numbers look dire, but Darden still expanded its total restaurant count by 10 locations year over year to 1,822 at the end of the third quarter. Olive Garden, LongHorn, Cheddar's, and Eddie V's all gained new locations as the company closed a few Seasons 52 and Bahama Breeze locations. Its number of high-end Capital Grille locations remained unchanged.

That expansion indicates Darden's is still treading water for now, and it could gain a lot more diners as the pandemic ends. In addition to that pent-up demand, Darden's could also gain diners from smaller restaurants that permanently closed during the crisis.

Based on those expectations, Darden's trades at just 20 times forward earnings. It also pays a forward yield of 1.1% and recently authorized a new $500 million buyback plan -- which suggests the stock still has upside potential after nearly doubling over the past 12 months.