Please ensure Javascript is enabled for purposes of website accessibility
Log In Help Join The Motley Fool
Free Article Join Over 1 Million Premium Members And Get More In-Depth Stock Guidance and Research
By Dan Caplinger - May 11, 2021 at 6:00PM

Hint: Neither is a tech company.

Stocks continued to trade in choppy fashion on Tuesday, sending popular stock indexes down more than 2% at their worst levels of the day. As the trading session progressed, though, things improved -- somewhat. By the end of regular trading Tuesday afternoon, only the Dow Jones Industrial Average (^DJI 0.55%) was still down more than 1%, with the S&P 500 (^GSPC -0.04%) seeing more modest declines and the Nasdaq Composite (^IXIC -0.48%) almost managing to get back to breakeven levels.

The Dow has been outperforming the Nasdaq recently, so it was surprising to see that dynamic reverse itself. Much of the decline in the Dow came from just a small number of stocks. Below, we'll go through the impact of the two Dow components, in particular, and what it says about the market's future.

Stock markets opened sharply lower, led downward by a big drop in technology stocks. However, the hardest-hit companies slowly clawed back much of their losses by the end of the day.

Here are the Dow's 2 worst decliners

The Dow Jones Industrial Average (DJIA) is a price-weighted benchmark. That's unusual, and it means that the higher the price of a stock, the greater the impact that stock has for any given percentage move in its share price. For instance, a $200 stock falling 2% would have four times the negative impact on the Dow as a $50 stock falling by the same 2%.

On Tuesday, two high-priced stocks in the Dow were big culprits in the DJIA's decline. Home Depot (HD 4.19%) finished lower by almost $10.50 per share, or 3%, representing roughly 70 points of the Dow's drop. UnitedHealth Group (UNH 0.07%) also weighed heavily on the Dow, falling just over 2%, or about $9.20 per share, and accounting for about 60 points of the decline in the DJIA.

Neither stock had any notable news to justify the move. Home Depot will announce its latest quarterly earnings next week, and investors are upbeat about the home-improvement retailer's prospects. Most of those following the stock expect a more than 40% rise in earnings year over year, with revenue growth likely to come in at 24%. Some of that positive impact is likely to stem from store closures in the year-ago quarter due to the COVID-19 pandemic, but some also comes from pent-up demand that could drive greater efforts to renovate and spruce up homes throughout 2021. 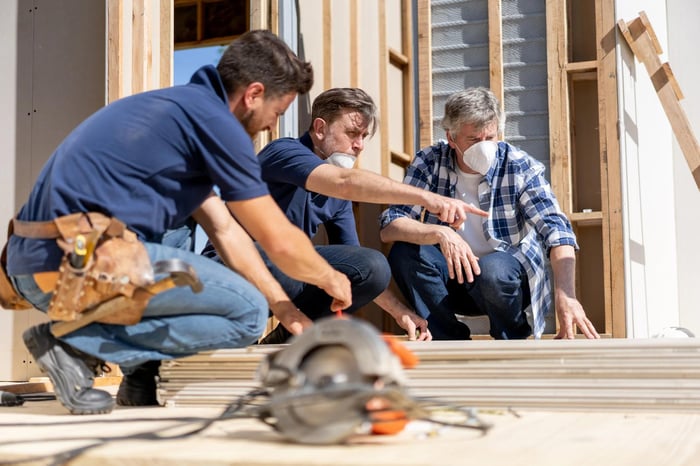 Meanwhile, UnitedHealth already reported its first-quarter results. The numbers absolutely wowed the investing community, as the health insurer has jumped to lofty heights in the weeks since then.

Nasty daily drops are always tough to endure. But it's helpful to keep moves in a broader context.

Both Home Depot and UnitedHealth have done extraordinarily well so far in 2021. Hopes for an economic recovery have raised prospects for retailers across the industry, and despite political wrangling in Washington, it's become increasingly evident that major reform efforts for healthcare could be very difficult to achieve. Even after today's declines, Home Depot shares are still up almost 25% in the first 4 1/2 months of the year, and UnitedHealth is sporting a 17% gain.

It's possible that these two stocks and others in the Dow could give up even more of their recent gains. Yet for long-term investors, the key is evaluating their prospects not in the next few days or weeks, but rather in the next several years or even decades.

Most of the Dow's stocks have delivered extremely strong returns over long periods of time. If you can adopt that kind of investing philosophy, it'll give you the perspective to weather days like this when they come.

Is It Time to Buy the Dow Jones' 3 Worst Performing Stocks This Year?

Home Depot, Macy's Show How Consumers Are Propping Up the U.S. Economy

Home Depot, Walmart Give the Dow a Tuesday Morning Boost