Please ensure Javascript is enabled for purposes of website accessibility
Log In Help Join The Motley Fool
Free Article Join Over 1 Million Premium Members And Get More In-Depth Stock Guidance and Research
By Howard Smith - Updated May 11, 2021 at 10:37AM

The reopening of Disneyland was the latest step on the road to recovery.

Companies in many different industries have been severely affected by the pandemic. But only one company has several of those businesses under one umbrella. Walt Disney (DIS 6.96%) was relying on theme park vacations, cruises, sports, and the movie industry for almost all of its business before the pandemic, and each came to a virtual standstill when it struck.

Disney management pivoted quickly and created a television streaming segment that blossomed while its other businesses were on hold. Now that vaccinations have rolled out, things are opening back up and people are talking about more than just the streaming services. 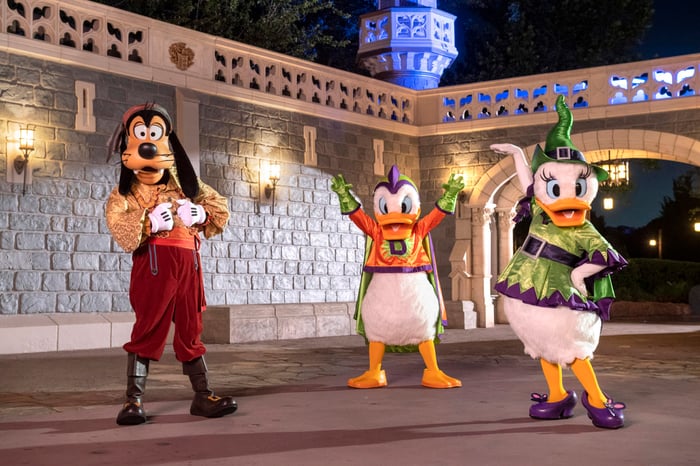 Disney's Boo Bash is a three-hour Halloween event that begins at 9 p.m. on select nights this fall starting Aug. 10 at the Magic Kingdom in Florida. Image source: Walt Disney.

Lots to talk about

Disney took another big step on its road back to normalcy with the reopening of its Disneyland and California Adventure parks in Anaheim on April 30. And while the temporary closure was painful for the business, Disney didn't just sit idly by waiting for the reopening ceremony. The company was working with Anaheim city officials during the pandemic restriction period on a long-term plan to grow the resort, and to help propel the city's economic recovery from the pandemic. The fact that planning was still top of mind during the crisis is something shareholders can feel good about.

The slow return of normal business is a direct benefit to all segments of Disney. Movie theaters are hosting customers again, and movie releases are back on the schedule. Sporting events are back, providing value for the company's media assets. But one area that has been in growth mode throughout the pandemic is one of the top areas of investor interest for what the future holds for Disney.

Disney reported over 146 million paid subscribers for its Disney+, ESPN+, and Hulu streaming services as of Jan. 2, 2021. It has since announced that Disney+ surpassed 100 million subscribers on its own. The popularity has already given the company confidence to raise pricing on the service for the first time, and it now estimates it will be on the path to operating Disney+ at a profit in fiscal 2024.

The media segment recently signed a new long-term agreement with the National Football League, further increasing the appeal of its ESPN and ABC networks, as well as the ESPN+ streaming service. The company also expanded Disney+ into international markets in February with its Star service brand.

Anticipation for success in streaming contributed to the stock's performance last year. Even as major parts of the overall business were basically at a standstill, Disney shares have gained almost 30% since the start of 2020. 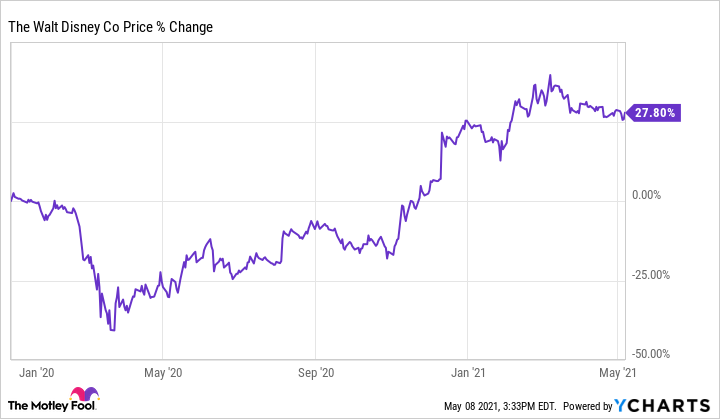 Returns have been basically flat thus far in 2021 as investors seem to be waiting for more data from the next leg of the recovery. Total revenue compared to the prior-year periods dropped 23% and 22%, respectively, in the last two fiscal quarters.

Investors will be looking for signs of progress on recovering revenue when Disney reports financial results on May 13. Even just returning to pre-pandemic sales levels would bring today's valuation to below a 4.5 price-to-sales ratio.

And while it still may be too soon to reinstate the dividend management suspended to save cash while navigating the crisis, investors have that to look forward to on the horizon as well. For now, details from the company on progress toward returning the business to pre-pandemic levels should be enough to keep investors talking about Disney.