Please ensure Javascript is enabled for purposes of website accessibility
Log In Help Join The Motley Fool
Free Article Join Over 1 Million Premium Members And Get More In-Depth Stock Guidance and Research
By Alex Carchidi - May 12, 2021 at 10:12AM

It's a good stock, but it might struggle to make you rich overnight.

When you're hunting for stocks that could juice your portfolio with quadruple-digit percent increases, there's (at least) one big choice to make. Is it a better bet to go with an established business that's doing what nobody else can do in a way that's paying off more and more over time, or to go with an unproven and immature competitor that could disrupt its industry?

Today, I'll be discussing a company in the first category: Novocure (NVCR 5.12%). Novocure is already profitable, and it has no shortage of revenue. But does it have what it takes to make new investors millions of dollars? 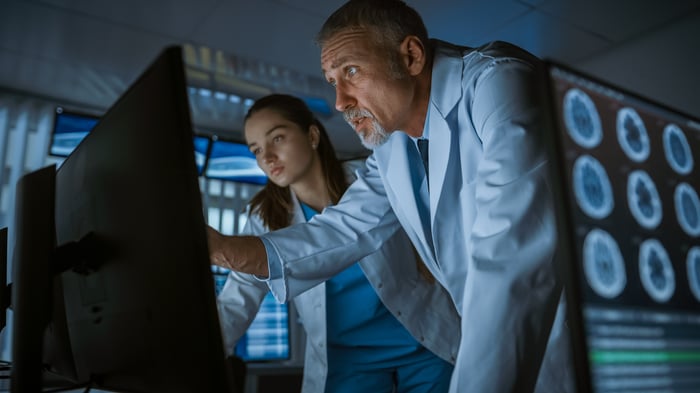 Why it could be worth investing in

Rather than making drugs to treat diseases, Novocure makes a device that applies a controlled electrical field to the patient's body as they go about their daily life, thereby diminishing the rate at which aggressive tumor cells can multiply. These "tumor treating [electrical] fields" subsequently help patients survive longer than they would otherwise. One of the company's studies found that newly diagnosed glioblastoma patients who wore the device for nearly 24 hours per day experienced a median of 25 months of survival time in comparison to people that didn't use it at all, who survived for a median of 16 months. That's a major difference, especially considering that glioblastoma is incurable.

Novocure's tumor-treating fields have regulatory approval to treat three types of cancer: mesothelioma and two forms of glioblastoma. The company also has four late-stage clinical trials that are investigating whether the fields could be used to treat ovarian cancer, pancreatic cancer, and other aggressive cancers. Given the device's proven ability to buy time for patients, these programs are quite promising. And expanding into new indications will doubtlessly be a reliable source of new revenue in the future. Likewise, while Novocure has some presence in the U.S., Japan, Europe, the Middle East, and Africa, it could one day expand into Asia and Latin America to bolster growth.

At the moment, about 3,400 patients globally are being helped with Novocure's tumor-treating fields, up from more than 1,000 at the start of 2017. The company bills insurers and patients for each month that they use the field-generating device.

Financially, the company is in good shape, with no red flags to speak of. It reported a gross margin of 80% in the first quarter of 2021, and its quarterly net revenue grew by 32% year over year, reaching $134.7 million. Novocure also has $864 million in cash on hand to fund further research and development (R&D), which it'll need if it wants to continue putting money there (it spent $46 million on R&D in the most recent quarter). 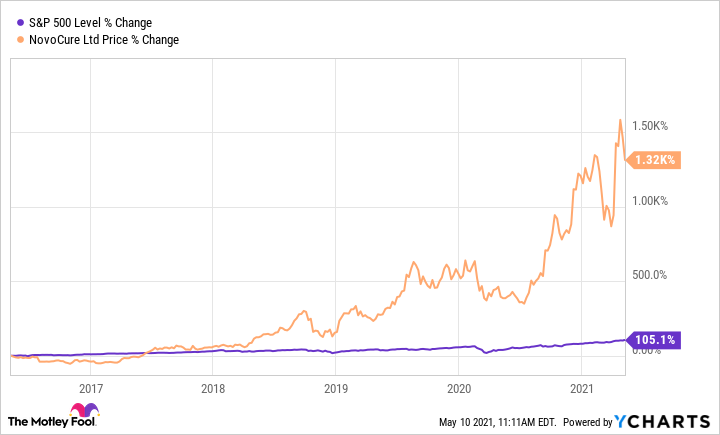 Why it probably won't make any millionaires

As promising as Novocure's product and recent growth are, investors shouldn't expect the stock to make them rich. In short, the company's market cap is $21.06 billion, and its stock has grown by about 1,670% in the past five years. That's strike one, because it means that people who buy it now have already missed out on the kind of growth that could have created millionaires.

Then there's the issue of how the stock might go up further. For the market to believe that Novocure is going to make more money tomorrow than it does today, the company needs to show consistently expanding sales and profits. And, for the scale of expansion that could make millions for investors, the market would be expecting extremely rapid growth.

Unfortunately, that's the missing ingredient. Novocure's quarterly revenue has expanded by 651.7% in the past five years, but it has never reported consistently rising earnings, and the pace of its revenue increases has ebbed over the last year. Plus, its quarterly earnings before interest, taxes, depreciation, and amortization (EBITDA) have fallen by more than 31% since mid-2019, so there's no clear skyrocketing trend that the market might pick up on and make the stock soar.

I think that Novocure could still be a good investment for people who buy it now. After all, it makes a unique and life-extending product that's proven effective and will soon be used in a few new niches where it's desperately needed. But buyers should keep their expectations in check. Early investors likely already made their millions on this stock, and that means you'll need to look elsewhere for your next 10-bagger.