Please ensure Javascript is enabled for purposes of website accessibility
Log In Help Join The Motley Fool
Free Article Join Over 1 Million Premium Members And Get More In-Depth Stock Guidance and Research
By Dave Kovaleski - Updated May 13, 2021 at 8:40AM

This stock has had 11 straight years of dividend increases and a 15% annualized return on its share price over the past 10 years.

Consistency is key for income investors. Generally, they want to invest in stable companies with business models that produce solid (and increasing) dividends, regardless of the market cycle. The best of them all are called Dividend Aristocrats because they are elite in their consistency, generating dividends that have gone up annually for 25 or more straight years. There are only a few dozen of these Dividend Aristocrats currently on the market.

But there are many more companies that are on their way to that plateau, including CME Group (CME 1.80%). It is not only a good dividend stock, but it also has the potential to generate long-term returns. 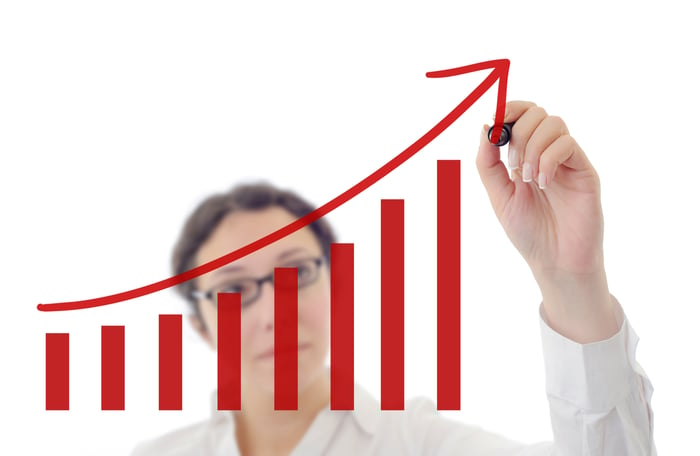 CME: A decade of rising dividends

In 2012, CME changed the way it distributes dividends, establishing an annual variable dividend at the end of the year in addition to the quarterly dividend. The annual variable dividend would increase or decrease based on the amount of excess cash available at the end of each year. The first full year of implementation was 2013, when it offered a $0.45 quarterly dividend with a $2.60 annual special dividend.

Two years before that shift in 2012, CME raised its dividend, making it 11 straight years with a dividend increase, dating back to 2011.

At Wednesday's prices, CME pays out its regular quarterly dividend at a yield of about 1.7%, which is slightly better than the average yield of the S&P 500. It has been in that range for the past few years. The payout ratio, which is the percentage of earnings that go toward the dividend, is around 53%. That is slightly on the high side, reflecting the fact that the company went through a difficult year. But it is still in a pretty good range and should tick down as earnings are expected to improve.

Why CMEʻs dividend should grow

There are a few reasons why investors should feel confident that CMEʻs dividend will continue to rise. First, CME Group is the largest derivatives exchange in the world in a pretty small pool of competitors, so it is a stable company with a decent moat that is not going anywhere.

Second, it makes most of its revenue on fees from trades on its exchanges, so it has steady, repeatable income. Also, volatility is typically not a problem; in fact, the more the better, because that means more trading activity. Last year, while there was a great deal of volatility in the first quarter of 2020 when the pandemic hit, it dropped off over the next three quarters, particularly for interest rate products, which make up the bulk of the volume on CME's exchanges. Trading activity for interest rate products plummeted after the first quarter as the Fed lowered the benchmark federal funds rate to 0% and supported the bond market, lowering demand.

In addition, CME has relatively low overhead, which, combined with that steady fee income, produces high margins. It has a 53% operating margin and generates lots of operating cash, currently with about $1 billion in cash, which it uses to return to shareholders via dividends.

The stock is up about 17% this year, and over the last 10 years, it has an annual return of about 15% on an annualized basis.

There is no special prize for becoming a Dividend Aristocrat, but investors do get years of steady performance and increasing dividends, which is not a bad consolation.