Please ensure Javascript is enabled for purposes of website accessibility
Log In Help Join The Motley Fool
Free Article Join Over 1 Million Premium Members And Get More In-Depth Stock Guidance and Research
By Adria Cimino - May 13, 2021 at 5:00AM

If Novavax is successful, it could generate billions.

Novavax (NVAX 2.80%) investors have been eagerly awaiting one thing -- for the company to request authorization to sell its coronavirus vaccine candidate. Earlier this year, Novavax indicated that would happen in the second quarter. So, the move seemed imminent.

And then came the disappointment. During the first-quarter earnings report this week, Novavax said it needed more time. The company now expects to file for Emergency Use Authorization in the third quarter. As a result, the shares sank nearly 14% in one trading session. This news leads us to Novavax's biggest problem right now. Let's take a close look at that problem and how the biotech company may succeed in spite of it. 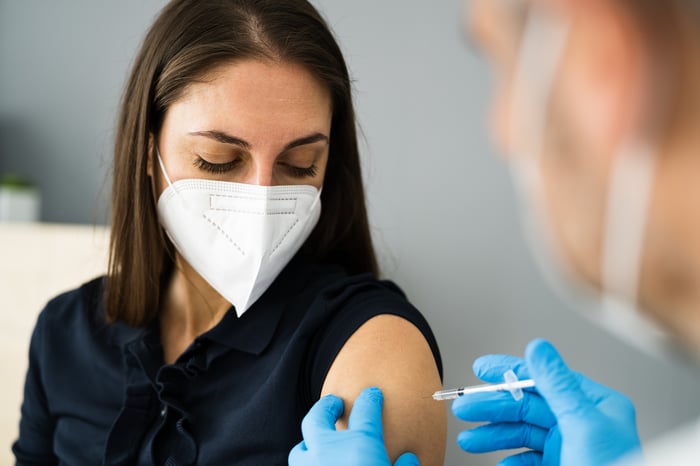 The U.S. Food and Drug Administration has authorized three coronavirus vaccines so far: those of Moderna, Johnson & Johnson, and partners Pfizer and BioNTech. The U.S. has ordered doses from all of these players for 2021. In fact, the government earlier this year increased its orders -- buying enough doses to vaccinate almost the entire population.

So, Novavax's weakness right now is it won't play a significant role in the U.S. 2021 vaccine rollout, even though the government actually pre-ordered 110 million doses of the Novavax candidate. If Novavax brings its product to market this year, the government may donate those doses to other countries in need of vaccines. President Joe Biden spoke of this recently.

Does this set Novavax back when it comes to serving the U.S. market in 2022? Possibly. Moderna and Pfizer have established leadership in the U.S. Together, they've fully vaccinated more than 30% of the total population. Now, both companies are close to launching strain-specific boosters. And Pfizer has even won authorization for use of its vaccine in teens. Moderna is close behind.

All of this means it's very likely the U.S. government may opt to order a great number of its 2022 doses from these market leaders. Novavax's delay may indeed make it more difficult to carve out share in the U.S. market in the coming year or so.

Meanwhile, how can Novavax overcome this weakness? By focusing on markets where demand is higher. And that's in international markets. The good news is Novavax clearly is making efforts to establish itself as a big provider internationally.

"We expect that even with early products sold at low prices, we will be able to match that with revenue from higher income countries to be able to generate sufficient cash flow to expand our business rapidly," Erck said during the earnings call.

Rolling out the vaccine where it's needed most is the right thing to do. And it works from a business perspective, too. It offers Novavax the opportunity to play a key role in controlling the pandemic and begin generating product revenue. Earlier this year, Novavax signed an advance purchase agreement with Gavi, the Vaccine Alliance, to provide 1.1 billion doses of its eventual vaccine to COVAX. COVAX is an effort to equitably distribute vaccine doses worldwide.

And here's something important to watch: Novavax remains in negotiations with the European Commission regarding a supply agreement. Novavax CFO John Joseph Trizzino said, "we are pleased with our progress to date."

This could represent a major opportunity. The EU has suffered vaccine shortages this year. And some countries in the region have expressed concern about rare blood clots that occurred in some individuals who received Johnson & Johnson and AstraZeneca vaccines. So, the EU may be looking for alternatives.

Novavax says unmet global demand should be one of the main drivers for billions of dollars in revenue for the company during the coming four to six quarters.

So, here's what we've got. Novavax's big weakness is finding a spot in the U.S. market in the near term. But that's OK. If the company can roll out its vaccine in many other countries around the world it still can generate significant revenue. Then it can focus on gaining U.S. market share over the longer term.

Experts say the coronavirus will be around for quite a while. That means there is opportunity for lasting revenue. And that's what awaits Novavax once it brings its vaccine candidate to market.