Please ensure Javascript is enabled for purposes of website accessibility
Log In Help Join The Motley Fool
Free Article Join Over 1 Million Premium Members And Get More In-Depth Stock Guidance and Research
By Reuben Gregg Brewer – May 14, 2021 at 7:37AM

The broader market is pretty frothy, but there's one sector still working its way back from trouble. I own two names in the space.

The S&P 500 index is near record highs and its yield is a miserly 1.3% or so, hinting at a market that is far from cheap. And yet there are still sectors that are deeply unloved, like energy. That's exactly where you'll find the two dividend stocks I recently bought and still think are worth a close look from any investors that want to maximize their current income in a low-yield world.

Integrated energy giant Total (TTE -0.25%) is in the same league as ExxonMobil, Chevron, Royal Dutch Shell, and BP. But there's one massive difference. When the chips were down in 2020, as oil prices cratered along with demand during the coronavirus pandemic, Total stated very clearly that its dividend would hold as long as oil averaged around $40 per barrel. Shell and BP cut their dividends. Exxon and Chevron said their dividends were important, but didn't provide any guidance on what that meant. For me, that was an important statement and provided something to which I could hold management accountable. 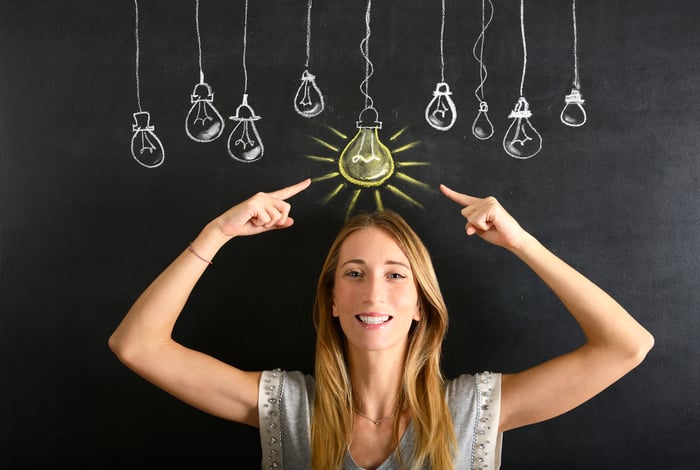 There's more to examine here, though. Shell and BP cut their dividends at around the same time they announced plans to pivot more toward renewable power. Chevron and Exxon have been much less aggressive on this front, though both are working in the space. Total lives somewhere in between these two extremes, as it looks to materially expand in what it calls its "electrons" business while also continuing to grow its carbon operations. That's a middle ground that I'm comfortable with, since I think the transition to clean energy will take decades to complete -- meaning carbon fuels will be around for a long time. It's also worth highlighting that Total has been investing in renewables for some time, so it isn't new to the business. I like the experience factor embedded in that, too.

Meanwhile, Total's dividend yield is a hefty 6.4%, the top end of this comparison group. I don't expect the dividend to grow anytime soon, as management has expressed a preference for debt reduction in the near term. That's a negative compared to Exxon and Chevron, which have long histories of dividend growth behind them. But, given the higher yield and more aggressive approach toward the changing shape of the energy sector, I'm OK with that. If you don't mind owning an integrated oil company, Total looks to me like it's the best all-around option today.

2. Stuck in the middle

The second name in the energy patch I like is Enbridge (ENB -1.24%), a Canadian midstream giant. Enbridge's business isn't as volatile as Total's, where financial results tend to rise and fall with the price of oil. Indeed, Enbridge's assets are largely driven by fees, long-term contracts, and government regulated rates, which makes it a much more consistent business. That's not exactly unique in the midstream sector, but Enbridge has a number of positives beyond this. For example, it is one of the largest oil (No. 1 by miles of pipe) and natural gas (No. 2) pipeline operators in North America. So, Enbridge will benefit from the need to move oil and natural gas for as long as the world still needs it.

That said, it also operates in the natural gas utility space, ranking as the No. 1 volume gas distributor  in North America. And it has a small position in the renewable power sector. Although renewables make up just 3% of EBITDA today, Enbridge has a number of large offshore wind projects in Europe it's working on. And it has been investing in renewables since 2002. So, like Total, this isn't a new development, and Enbridge has ample experience putting money to work in this emerging sector. All in, Enbridge is a play on energy infrastructure with a clean energy hedge. 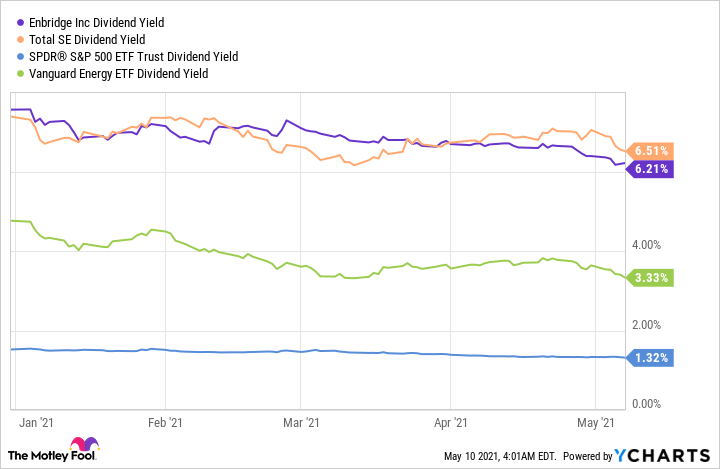 Enbridge's dividend yield is 6.8% today. It has increased its dividend annually for 26 consecutive years. And it expects to keep that streak going, too, with growth spending of between $5 billion and $6 billion a year supporting distributable cash flow growth of 5% to 7% annually (with dividends trailing along in a similar range). Add in that Enbridge is a traditional corporation and not a more complicated master limited partnership (a common structure in the midstream space), and it looks like a very good option for dividend growth investors.

I bought Total and Enbridge at lower prices, but I'm happily letting my dividend get reinvested in both names. Although some may view the energy space as a near-term recovery opportunity, I'm looking at these two as long-term holdings. The key is that they are offering solid yields, providing access to vital fuels, and starting to adjust so they will remain pivotal players as the world shifts, over time, toward cleaner energy alternatives. That's a winning scenario in my book, and both are still well worth the price of admission if you are trying to maximize your income stream in today's low-yield world.