Please ensure Javascript is enabled for purposes of website accessibility
Log In Help Join The Motley Fool
Free Article Join Over 1 Million Premium Members And Get More In-Depth Stock Guidance and Research
By Bradley Freeman - May 14, 2021 at 8:03AM

Here's why these two companies make the perfect pair.

Since early 2020, when Penn National Gaming (PENN -3.86%) purchased a 36% stake in Barstool Sports, the duo has been hard at work. Together, the team is leveraging the deeper pockets of Penn and the wider reach of Barstool to create an entertainment powerhouse.

Here's what they're working on, how it's faring, and where they go from here. 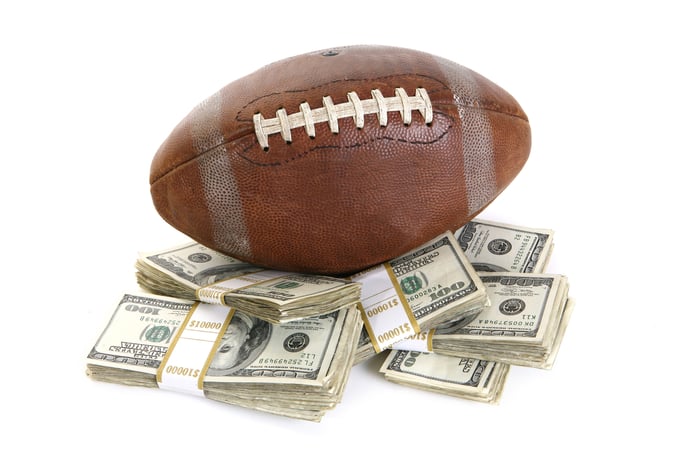 Late last year, the pair released Barstool Sportsbook in Pennsylvania before quickly expanding into Michigan and Illinois. In Michigan specifically, the product has been able to rack up 13.7% market share (by online handle) against stiff competition.

Encouragingly, Penn has spent very little on external marketing compared to its competition for the app, instead leaning on Barstool's massive, cult-like following to spread the word organically. What this has translated into is a 20.9% total revenue market share for Barstool, meaning it's better at converting bets to sales than its average alternative. Impressively, Penn has spent far less on promotions than FanDuel, DraftKings, and MGM Resorts International.

When looking at Pennsylvania, its revenue share is also meaningfully outpacing its handle share. The pattern is quite clear: Barstool has been able to win with its brand awareness, while competitors continue to shell out promotions to capture market share at all costs.

On April 4, the state of Illinois reinstated its on-premise registration mandate for new sports gambling accounts, and it gave operators like Penn just 36 hours' notice. This led to a full-on sprint by market participants to rack up as many online registrations as possible before the deadline. The result?

Barstool's app reeled in north of 20,000 new registrations during those one-and-a-half days, and it beat every other operator in App Store rankings. Barstool's following is fiercely loyal, and it really showed here.

Not just a sportsbook

Barstool's Sportsbook app is offering some interesting cross-selling opportunities too. In Michigan, more than half of Barstool's sports gamblers have also placed an iCasino bet. The more consumers interact with Penn and Barstool's product offering, the better, and this serves as yet another way to build a lucrative connection.

Barstool is even helping with Penn's brick-and-mortar operations. At Penn's Greektown Casino in Detroit, the retail sportsbook has been rebranded to Barstool. Solely as a result of this change, its share of gross gaming revenue (GGR) in that market rose from 23.6% to 37.0%.

For more evidence, its two rebranded retail sports books in Indiana both saw an immediate GGR share boost amid the refresh as well.

Barstool even hosts two of the nation's top 20 podcasts and slots in just behind the New York Times for fourth in the U.S. for audience size with 8.46 million monthly listeners. This offers yet another marketing channel for all of Penn and Barstool's offerings and even contributes meaningful advertising revenue as an added bonus.

In 2023, Penn National will have the opportunity to raise its stake in Barstool from 36% to 50% with the option to negotiate a larger stake at that time.

Penn National is a buy

Penn National Gaming changed the trajectory of its entire business with the purchase of Barstool Sports. The company went from a traditional casino chain to an entertainment conglomerate with tens of millions of passionate fans.

For this reason, I believe Penn is only in the first inning of leveraging Barstool's reach, and for this reason, Penn is a core holding in my portfolio.