Please ensure Javascript is enabled for purposes of website accessibility
Log In Help Join The Motley Fool
Free Article Join Over 1 Million Premium Members And Get More In-Depth Stock Guidance and Research
By Jennifer Saibil - May 14, 2021 at 1:23PM

The first-quarter report for this insurance provider had some good points and some bad points. This was the worst.

Insurance provider Lemonade (LMND 5.66%) was an IPO darling when it debuted on the stock market last July, but it's gone through a series of ups and downs since then. The stock price got a bump recently after the company announced its new product, Lemonade Car, but the price tanked after the company released its first-quarter earnings report on Wednesday.

What was so bad about the company's latest earnings report that it resulted in an 18.5% stock price drop on the day after the earnings release? And is this a sign of more widespread trouble for the company?

Some good news and some bad

Let's go through the good parts first. Lemonade's in force premium (IFP) metric (basically active accounts) increased 89% year over year to $252 million in the quarter.  The gross earned premium (what was collected in premiums before payouts and expenses) metric rose 84% to $56 million. Premium per customer increased 25% to $229, and customer count increased 50% over Q1 2020 to just under 1.1 million. Non-renters insurance accounted for half of the new business, an increase from a third of new business in Q1 2020. 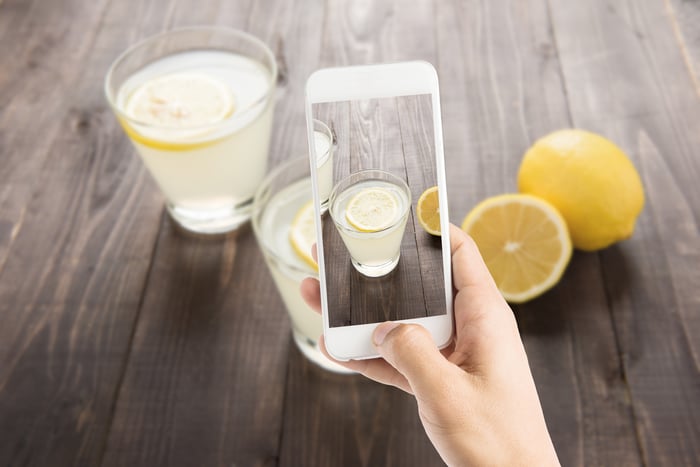 The company also introduced a new key performance indicator that it calls annual dollar retention (ADR), which is the amount of IFP retained over one year. ADR increased 81% in Q1, and growth accelerated from previous quarters.

On the bad news side of the equation, the Texas freeze in February was a major strain on Lemonade's budget, and its loss ratio, which is the balance of funds paid out compared to premiums collected, increased 50% year over year to 121%. Gross profit decreased 59% to $1.9 million, mostly due to the Texas impact. Loss per share of $0.81 came in slightly below analyst expectations, and the net loss was $49 million, compared to $36 million in Q1 2020.

Lemonade has a unique business model generally where it keeps 25% of a policy premium and passes along the rest of the premium to a reinsurer (a company that provides financial protection to insurance companies by assuming some of the risk for a fee), so payouts affect Lemonade in a less tangible way than they do traditional insurance companies. However, loss ratio is still an important indication of how well the company is doing. Prior to the Texas catastrophe, Lemonade's loss ratio had been decreasing year over year, with a low of 67% reported in Q2 2020. Without the Texas storm factored in, its loss ratio was healthy.

Company management said it worked hard to provide a positive experience for customers despite the high payouts, and its net promoter score (respondents rate the likelihood that they would recommend a company) for policy holders was 70. CEO Daniel Schreiber said, "We believe this is without parallel in our industry."

He noted that even factoring in the high payouts in Q1, Lemonade's EBITDA (earnings before interest, taxes, depreciation, and amortization) was in line with expectations, since Lemonade has contingency plans in place for such catastrophes.

Lemonade has been on a launch spree, adding pet insurance last year and life insurance in 2021, and it plans to launch auto insurance this summer. It's also diversifying its marketing and advertising expenses to reach more customers where they are. In other words, it's in solid growth mode. That almost by default comes with ups and downs.

Most of the earnings results were quite good, and management is using all of the data it compiled from the Texas storm and its aftermath, as well as all the data it got in the first quarter, to improve its analysis of where to set premiums. After all, the digital experience it provides for customers is data-driven, and it's using the same tools to figure out how to run a more competitive business.

These growing pains are normal for a fairly young and growing company. Don't let them deter you from being confident in Lemonade's long-term potential. The broader tech industry has been facing stock price declines recently. Based on the high valuations of many of those stocks, it's not surprising that there has been a short-term price correction. I would look at these short-term drops as an opportunity to purchase discounted shares of companies that have strong long-term growth prospects, and Lemonade fits that description.