Please ensure Javascript is enabled for purposes of website accessibility
Log In Help Join The Motley Fool
Free Article Join Over 1 Million Premium Members And Get More In-Depth Stock Guidance and Research
By Dan Caplinger – Updated May 14, 2021 at 12:21PM

Those who endured volatility earlier in the week are getting their reward.

Earnings reports continued to come out, and the news from delivery specialist DoorDash (DASH 2.16%) led to big gains for the stock. However, Disney (DIS 2.97%) wasn't able to deliver the knockout growth that shareholders had hoped to see, and that led to declines for the House of Mouse Friday morning.

Shares of DoorDash jumped almost 20% Friday morning. The company reported huge growth in the first quarter as it started to see signs of an economic recovery in the markets it serves. 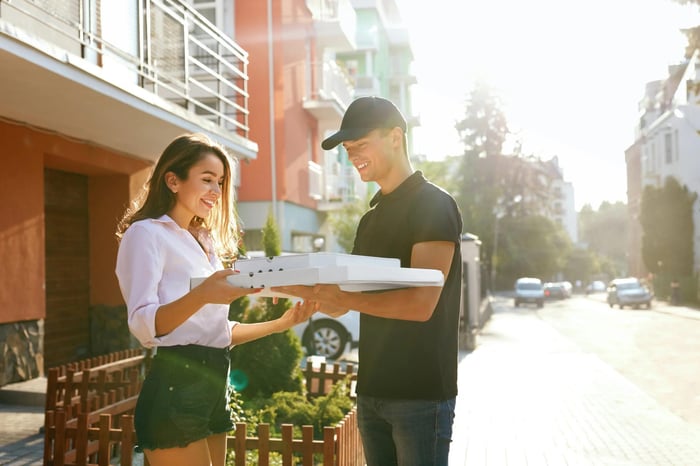 DoorDash's metrics were impressive. Revenue almost tripled to $1.1 billion, as the total number of orders surged 219% from year-ago levels to 329 million. Users spent almost $10 billion on the DoorDash platform, higher by 222% year over year. The company continued to lose money, but both GAAP and adjusted pre-tax operating figures saw their losses narrow from where they were in the first quarter of 2020.

DoorDash pointed to a number of favorable trends. Customers are ordering more often than they did previously, and many of them are spending significantly more per order than in the past. Subscribers in the company's DashPass program more than doubled year over year and helped drive higher order volume.

Many DoorDash shareholders had feared that the reopening could drive more people away from delivery options toward visiting restaurants in person. That hasn't happened, and that could mean continued good news for DoorDash well into the future.

Wishing on a falling star

Elsewhere, Disney shares were down 3.5% near midday. The entertainment and media giant's fiscal second-quarter results weren't quite as strong as some had wanted to see, despite showing signs of recovery.

Disney's key numbers were mixed. Revenue slid 13% from year-ago levels, with the company's theme park and cruise ship segment suffering the biggest decline, falling 44% year over year. That missed what most of those following the stock were projecting on the top line. By contrast, the media and entertainment distribution division held up reasonably well, with a 1% rise in sales that translated to a 74% year-over-year boost to segment operating income. Adjusted earnings climbed 32% to $0.79 per share, which was considerably better than what many had expected from Disney.

Investors focused squarely on results from the Disney+ streaming service, which added 8.7 million subscribers. That pushed the total into nine figures at 103.6 million subscribers, but many feared that slowing growth in the streaming base could put pressure on the service's ability to keep growing sales into the future.

CEO Bob Chapek is optimistic that signs of recovery will mean more attendance at theme parks, resorts, and movie theaters, and that could drive Disney's business back upward throughout 2021. Shareholders apparently want to see more proof of that recovery before they'll buy into the bull case for Disney entirely.