Please ensure Javascript is enabled for purposes of website accessibility
Log In Help Join The Motley Fool
Free Article Join Over 1 Million Premium Members And Get More In-Depth Stock Guidance and Research
By Alex Carchidi - May 15, 2021 at 6:42AM

Yes, if you think that cannabis legalization is coming soon to the U.S.

Hailed as "the unquestioned leader in the U.S. consumer lawn and garden space" by equity analyst Joe Altobello, Scotts Miracle-Gro (SMG 2.50%) is a company that makes the idea of watching the grass grow into something (financially) exciting.

With its selection of fertilizers, pesticides, hydroponics equipment, and gardening gear, Scotts is uniquely positioned because it serves the market for hobbyists just as gracefully as it serves commercial markets. And, thanks to the burgeoning cannabis industry in the U.S., the company is ready to start supplying up-and-coming marijuana cultivators, thereby boosting its growth. But does that make this stock worth a buy? 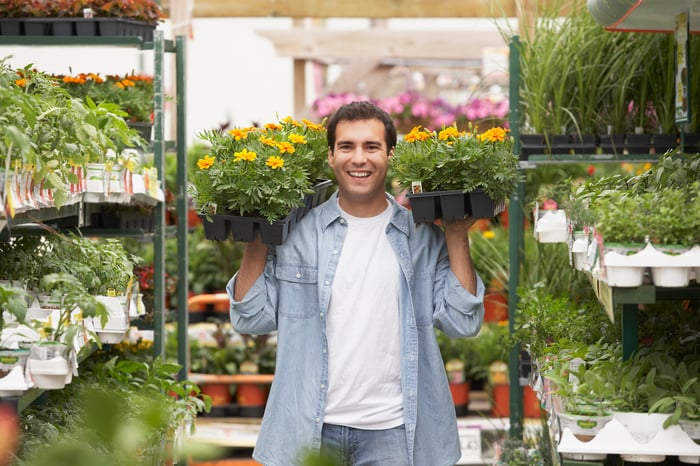 Why it's worth buying this stock

The most compelling reason to buy Scotts is that it's already capitalizing on ever-rising demand from the cannabis industry.

In the most recent quarter, Q2 of fiscal year 2021, Scotts reported that its quarterly revenue grew by 32.3% year over year and that its earnings grew by 22.9% in the same period. Some of this revenue is likely from hobbyists looking to stay busy during the enforced idleness of the pandemic. But the real returns are from its commercial sales to cannabis businesses in states that recently approved some form of marijuana legalization, like Michigan and Oklahoma, where sales have boomed.

Its Hawthorne brand of hydroponic equipment experienced a sales increase in excess of 60% for the fifth consecutive quarter. Roughly two-thirds of the Hawthorne product base is in durable goods like hydroponics, growing lights, and irrigation controllers. That's exactly the kind of gear that cannabis growers need, and management is confident that the industry's growth will continue to be a major driver of sales.

What's more, based on the company's experience in states like California, the CFO estimates that there is a lag of roughly one and a half years between new cannabis legalization legislation and rising sales of the company's products as demanded by the sector's businesses. That's a counterintuitive piece of great news for investors, because it means the rapid revenue expansion of the past year happened before any impact from the wave of legalization prompted by the 2020 election. So, while there's already a strong confirmation of the investing thesis that Scotts is taking advantage of prior progress in legalization by virtue of supplying key equipment to the cannabis industry, the real ramp-up is likely just getting started.

Other perspectives to consider

I have a few things to nitpick about Scotts. The first is that its cash holdings are a measly $14.4 million, which is especially small considering the second issue, which is its long-term debt of $2.54 billion. While there's no indication that the company will have trouble serving these debts anytime soon, its free cash flow will eventually be constrained by the scale of debt payments. That could eventually make it harder to expand into new markets.

Then there's the larger issue of upcoming downward pressure on its margins that the company predicts will continue to occur throughout the rest of the year. Its profit margin of 10.91% is healthy enough for now, even if it's not enormous. In the most recent quarter, its selling, general, and administrative (SG&A) expenses rose 18%, which is quite sharp, but attributable to new marketing spending. External economic factors may soon be problematic too. Management is cautioning investors about the impact of rising commodity costs, while also giving due credit to the margin-reducing effects of Scotts' ongoing rapid expansion and its battle to meet surging demand. To address these problems, price increases of up to 9% are scheduled to take effect in August.

I'm bullish on Scotts Miracle-Gro, and I think that the stock is worth purchasing this month, at roughly its current price. I'm always a fan of companies that profitably sell essential equipment to growth industries, especially when they have minimal downside risk compared to their customers.

The company's trailer is hitched to the rocket ship of the cannabis industry, and management clearly understands the needs and timelines of the all-important commercial customers. In short, it has already sown the seeds for its future success, and the biggest challenge of the near future will be to harvest its crops as efficiently as possible.