Please ensure Javascript is enabled for purposes of website accessibility
Log In Help Join The Motley Fool
Free Article Join Over 1 Million Premium Members And Get More In-Depth Stock Guidance and Research
By Rich Smith - May 16, 2021 at 5:53AM

General Dynamics will probably win -- but what if it doesn't?

The light armored vehicle (LAV) is not a "tank," exactly -- but since its introduction in 1983, General Dynamics (GD 2.64%) and its predecessor companies have sold more than 10,000 around the world. That's about as many Light Armored Vehicles as it's sold Abrams main battle tanks. At recent prices running to $4.3 million apiece, the LAV has evolved into a multibillion-dollar franchise for the giant defense contractor. 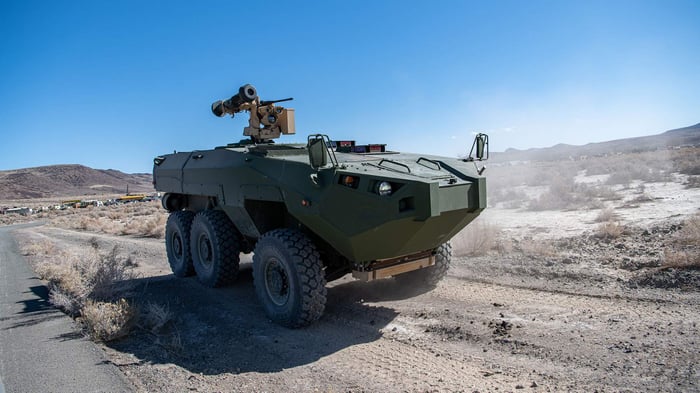 Tanks for the memories, LAV

In 2019, the U.S. Marine Corps, the original buyer of the LAV, announced a project to replace the Corps' venerable armored vehicle with a new "modern Armored Reconnaissance Vehicle ... highly mobile, networked, transportable, protected and lethal," aiming to begin the switchover in the late 2020s.

As the legacy provider, General Dynamics was quickly tapped to offer a prototype ARV to replace the Marine Corps' fleet of 600 LAV-25s last year. BAE Systems, which manufactures the Marine Corps' Amphibious Combat Vehicle, is also expected to bid. SAIC (SAIC 1.43%) entered the competition in 2019, but has since dropped out.

General Dynamics' toughest competition of all, however, for the upcoming ARV contract, may come from a joint bid by rival U.S. armor-maker Textron (TXT 1.55%) and its Israeli partner Elbit Systems (ESLT 2.16%). Last week, the two companies jointly announced plans to offer the U.S. Marine Corps a "transformational" light tank by the name of "Cottonmouth" to serve as the new ARV.

Technical specifications of Textron's prototype have not been released. But images of the Cottonmouth prototype show it to be an amphibious, six-wheeled, low-profile armored vehicle equipped with an anti-tank missile launcher and a remotely operated gun system. To meet USMC requirements, the Cottonmouth would need to weigh no more than 18.5 tons, so that a single "Ship-to-Shore Connector" (a large hovercraft) could carry four ARVs at a time from an amphibious warship to assault a beach.

Inside, the Cottonmouth will feature "360° Situational Awareness" from Elbit, utilizing external cameras to display the vehicle's surroundings inside on crew workstations and on individual "IronVision Helmet Mounted Displays." With this tech, the ARV's crew will be able to effectively "see through" the ARV's armor in all directions.

What it means to General Dynamics ... and to Textron

Winning the ARV competition would be big business for any company -- but for Textron especially.

Consider that analysts estimate that an ARV contract could yield sales of $1.8 billion to $6.8 billion over five years to the winner, depending on the prices the competitors bid. If accurate, this implies a unit cost of $3.6 million to $13.6 million on the estimated 500 ARVs that the USMC would require.

That's quite a lot, considering that General Dynamics is still selling LAVs for about $4.3 million. In theory, General Dynamics could make even more money selling the USMC 500 ARVs than it's made already selling them 600 LAVs. And according to data from S&P Global Market Intelligence, General Dynamics' Combat Systems division, which builds the LAV and would build the ARV, is General Dynamics' most profitable division, boasting an operating profit margin of 14.4% on its sales. For its part, Textron earns only 11.6% profit margins at its smaller Textron Systems business, which would be responsible for Cottonmouth production. (And Elbit's operating margin is even smaller -- just 7% for the entire company).

If the ARV contract ends up being worth $6.8 billion, that would still be less than one year's Combat Systems sales for giant General Dynamics, which booked $7.2 billion in sales last year -- moving the needle for giant GD, but perhaps not by much. $6.8 billion for Textron, on the other hand would be more money than its tiny Textron Systems division generates in over five years of work. For Elbit, a $6.8 billion contract would be more money than the entire company makes in a year.

A win on ARV for General Dynamics, therefore, would be welcome news, and help maintain the profitability of what is currently General Dynamics' most profitable division. A win for Textron and Elbit, on the other hand, could transform each of those companies into vastly more profitable businesses for years to come.