Please ensure Javascript is enabled for purposes of website accessibility
Log In Help Join The Motley Fool
Free Article Join Over 1 Million Premium Members And Get More In-Depth Stock Guidance and Research
By Jason Hawthorne - Updated May 16, 2021 at 3:33PM

A great business in a rapidly growing industry won't stay on sale for long.

With the recent hack of Colonial Pipeline leading to gas shortages on the East Coast, it's clearer than ever why company executives have security as a top priority. Many are implementing an idea known as "zero trust." Just like it sounds, it's a policy of not trusting anyone. In practice, it essentially eliminates all access to a network until a user has been authorized.

One of the beneficiaries of the shift has been Okta (OKTA -6.50%), a software-as-a-service (SaaS) provider of identity management solutions. Although the company has seen tremendous tailwinds from the heightened security requirements of remote work, its stock sits more than 20% off its highs after the recent sell-off in technology stocks. Let's look at why that drop is short-sighted. 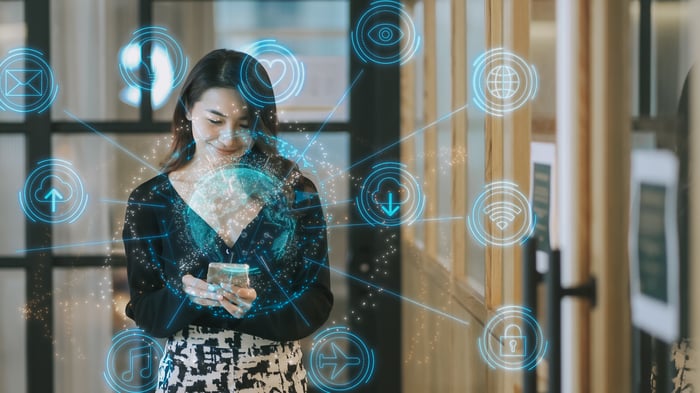 There aren't many better industries right now than cybersecurity. It's an estimated $162 billion market slated to grow to over $400 billion by 2028. With the shift to zero trust, Okta's Identity Cloud is perfectly positioned. It harnesses the power of cloud computing, as well as mobile and web-based technologies, to create a central system of access for a company's employees. At the end of January, Okta had more than 10,000 customers in nearly every industry around the globe.

The system is used in two ways. First, companies are able to authenticate employees, contractors, and partners when they attempt to access the company's internal network in any way. This process is called workforce management. Okta's customers can also layer in its security to provide authentication for their own customers. That's the second application, called customer identity. Unlike some legacy vendors that need to unseat a competitor's products to sell their own, Okta has more than 7,000 integrations with other technology leaders. That helps it play a vital role -- identity management -- in a larger cybersecurity landscape. Among the partnerships are integrations with titans such as Amazon.com's Amazon Web Services, Alphabet's Google Cloud, and Microsoft, as well as endpoint protection leader Crowdstrike.

Okta's SaaS business model generates most of its revenue through multiyear subscriptions to its cloud-based offerings. Management believes the workforce identity market is roughly $30 billion and the potential of the customer identity is about $25 billion. With less than $800 million in sales in the fiscal year ending Jan. 31, the company has a huge opportunity if it can add customers and deepen the relationship with existing ones. It's knocking the ball out of the park in both areas.

Since a SaaS business can only recognize revenue over the life of the contract, revenue growth can often understate the true expansion. Okta grew revenue 44% last year and remaining performance obligations (RPO) -- sold work that has yet to be recognized as revenue -- by 49%.

The number of customers with an annual contract value (ACV) greater than $100,000 continued to grow at a rapid clip, while dollar-based net retention remained incredibly high. That net retention number over 100% means that growth from existing customers more than offsets any churn. Seeing it remain at that elevated level means revenue is compounding year after year even if no new customers are added. Toss in the growth in large contracts, and you have the recipe for hypergrowth.

Okta is adding new customers, too. Nearly half of the customers with ACV greater than $100,000 added last quarter were new customers. That represents large customers that the company is taking from legacy vendors such as Oracle and IBM. Okta is growing on all fronts.

Management recently took a leap forward by agreeing to acquire Auth0 for $6.5 billion in stock. It was a brilliant move to eliminate a strong competitor without spending any cash. Okta also gained a valuable tool to help developers embed identity management into even more applications.

Another offering should accelerate the company's transition to a cash-generating business. Its cash from operations and free cash flow indicate it can become a profit machine for shareholders whenever it decides. That said, there is no reason to stop investing now, with such high growth rates and low penetration of the addressable market.

Okta's mission is to bring simple and secure digital access to people and organizations everywhere. Its value is evident in the growth numbers, and its cash flow is indicative of a great business just getting started. Unfortunately, great businesses are never cheap.

Okta currently trades at a price-to-sales ratio of 35. That's about as cheap as it has been since early in the pandemic, but it still isn't actually cheap. Management estimates full-year revenue to come in between $1.08 billion and $1.09 billion. Some estimates suggest Auth0 could add about $300 million to that number this year. Projecting that for the fiscal year ending January 2022, the stock trades at about 25 times forward sales. For context, it consistently traded around that number from the summer of 2019 through the beginning of the pandemic. Once investors realized the security implications of remote work, it jumped higher.

Ultimately, the valuation will work itself out over time if management keeps executing. So far, every indication is that they will. Thanks to the recent sell-off in tech stocks, this industry leader is finally on sale again. If history is any indication, it might not last long.