Please ensure Javascript is enabled for purposes of website accessibility
Log In Help Join The Motley Fool
Free Article Join Over 1 Million Premium Members And Get More In-Depth Stock Guidance and Research
By Jim Halley - Updated May 18, 2021 at 9:08AM

These three companies are all benefiting from the explosion in cannabis sales without even touching the plant.

Mark Twain famously said, "During the gold rush, it's a good time to be in the pick and shovel business." He meant that the real, consistent money in such boom times was made by the ancillary businesses that supported the gold rush.

Back then, companies such as Levi's jeans and real estate speculators profited greatly from the gold rush. Today, in the boom of cannabis sales, Scotts Miracle-Gro (SMG -0.51%), Grow Generation (GRWG 5.69%), and Innovative Industrial Properties (IIPR 2.15%) are benefiting from the growth in marijuana sales, even though they don't touch the leaf.

All three stocks have something over the typical marijuana company -- positive net income and stability. They provide opportunities to invest in marijuana with less risk. 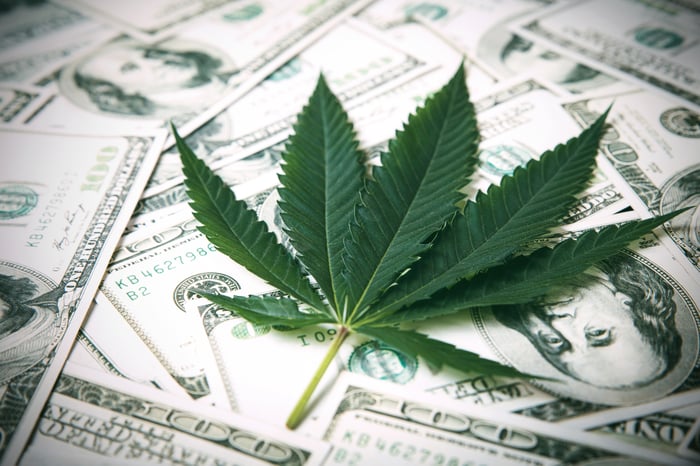 Most people may be familiar with Scotts for its consumer lawn and garden products, but through its subsidiary, the Hawthorne Gardening Company, it is one of the leading producers of hydroponic and indoor growing products necessary to the marijuana industry. In the first quarter, Scotts reported revenue of $1.82 billion, up 32% year over year. The company also posted net income of $310.2 million, up from $252.4 in the same period the prior year.

Hawthorne had a big hand in that success with $673.2 million in sales, up 68% over the same period in the prior year. Scotts CEO Jim Hagedorn said Hawthorne's sales should climb 30% to 40% this year. On top of that, the company offers a quarterly dividend that it increased last year by 7% to $0.62 a share, which works out to a yield of 1.08%. The company's stock is up a little more than 13% this year.

The company's stock is up more than 130% over the past year, though down slightly more than 5% this year. Like many REITs, which are required by law to pay at least 90% of their taxable earnings back to shareholders, Innovative has a nice dividend. In the fourth quarter of 2020, the company raised its quarterly dividend by 6% to $1.24 per share, a rise of 24% over the company's dividend at the same time in 2019. As of this writing's share prices, the dividend works out to a yield of about 2.7%.

The company's first-quarter numbers show how nicely its growth story is progressing. It reported revenue of $42.9 million in the quarter, up 103% year over year. Its adjusted funds from operations (FFO) was $38.4 million, up 117% compared to the same period last year.

Innovative Industrial continues to expand its business. It just completed a deal with multistate marijuana company, Parallel, to lease back a 239,000-square foot facility in Pittsburgh that will primarily be used by Parallel as a growing facility. That gives Innovative 70 properties across 18 states with 6.4 million rentable square feet, of which 100% is leased with an average lease term of 16.8 years. That means the company's cash flow should be extremely stable, allowing for more growth in the future and keeping the company's dividend at a safe payout ratio of about 70 (trailing 12 months).

GrowGeneration's stock is heating up, rising more than 610% over the past year, though its shares are down more than 5% in 2021. The company says it is the largest hydroponics supplier in the country with 53 retail and distribution centers.

GrowGeneration reported revenue of $90 million in the first quarter, up 173% year over year. It also said it had net income before taxes of $7.7 million, up from a $2.1 million loss in the same period in 2020. What gets me most excited about the company is it has been gobbling up hydroponic equipment and organic garden centers, which should help the company scale up its offerings (and revenue) in the future. The company has increased sales for 12 consecutive quarters.

In the first quarter alone, it bought six different hydroponic or garden center businesses, plus Char Coir, a company that produces high-grade coconut fiber that is used for ropes, furniture, car seats, and erosion control, and is expected to bring in more than $15 million annually in revenue. The company also bought Agron.io, a business-to-business e-commerce site for commercial growers.

Turning over a new leaf in investing

I like Innovative Industrial Properties because it doesn't have much competition yet and has such a strong business model. While it could be hurt by a long downturn in the market, there's so much growth potential in cannabis now that new companies are coming along all the time that could benefit from leasing back their facilities for more cash. Innovative's dividend increases the likelihood of a high total return to investors.

I like both Scotts Miracle-Gro and GrowGeneration because they will benefit from the increased production of marijuana, whether it be by companies or individuals. Of the two, I like Scotts Miracle-Gro for its strong financial position, but I believe GrowGeneration is the better long-term buy because for its focus on pot products and potential in a fully legalized commercial space.