Please ensure Javascript is enabled for purposes of website accessibility
Log In Help Join The Motley Fool
Free Article Join Over 1 Million Premium Members And Get More In-Depth Stock Guidance and Research
By Eric Volkman - May 18, 2021 at 9:19AM

The state becomes the 37th sanctioning marijuana to some degree.

On Monday, Alabama became the latest in an ever-growing list of states to legalize marijuana to some extent, as Gov. Kay Ivey signed into law a bill that permits the sale and consumption of medical cannabis.

With Ivey's signature, the Deep South state becomes the 37th across the U.S. to legalize medical marijuana. Alabama's new law was passed by the state Senate earlier this month following amendments made by the Alabama House of Representatives. It sailed through the Senate in a 20 to 9 vote; the preceding House vote was also a crushing victory, at 68 to 34. 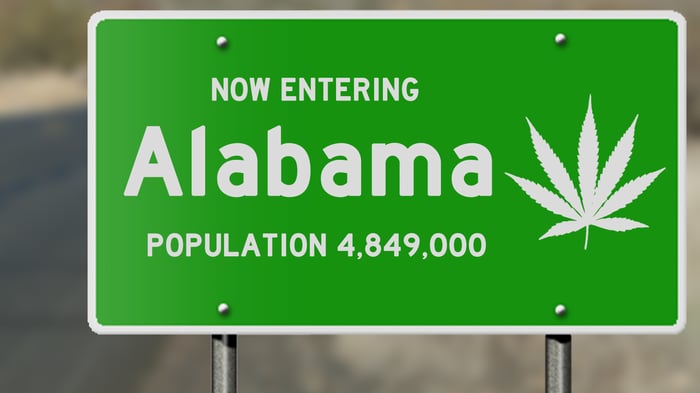 In addition to sanctioning medical weed, the law calls for the creation of the Alabama Medical Cannabis Commission, a state agency that will oversee the industry. The drug can be prescribed to qualifying patients suffering from a range of illnesses including cancer and epilepsy.

Meanwhile, growers of the drug will be regulated by the Alabama Department of Agriculture and Industries.

As with numerous other legalization initiatives throughout the U.S., Alabama's law won't instantly create a market for the drug. Rules and procedures need to be established, in addition to licensing frameworks for entities involved in the marijuana business. Accordingly, the law stipulates that the cannabis commission must set these and start allowing applicants to file for licenses by Sept. 1, 2022.

As legal marijuana is entirely new to Alabama, none of the publicly traded pot companies are yet active in the state. One certain to have an eye on it is Trulieve Cannabis (TCNNF -1.76%), which is based in neighboring Florida and has a dominant position there. Trulieve, which recently announced its acquisition of Harvest Health & Recreation, is clearly eager to expand its footprint in other states.