Please ensure Javascript is enabled for purposes of website accessibility
Log In Help Join The Motley Fool
Free Article Join Over 1 Million Premium Members And Get More In-Depth Stock Guidance and Research
By Eric Volkman - May 18, 2021 at 11:01PM

The company says this is necessary because of a "parts shortage."

Toyota (TM -0.88%) announced in a tersely worded press release Tuesday that it is halting productions at three production lines, located in two of its factories in Japan.

The company said the shutdowns were due to a "parts shortage." Reporting on the matter, Reuters said more specifically that the culprit was the global shortage of computer chips. 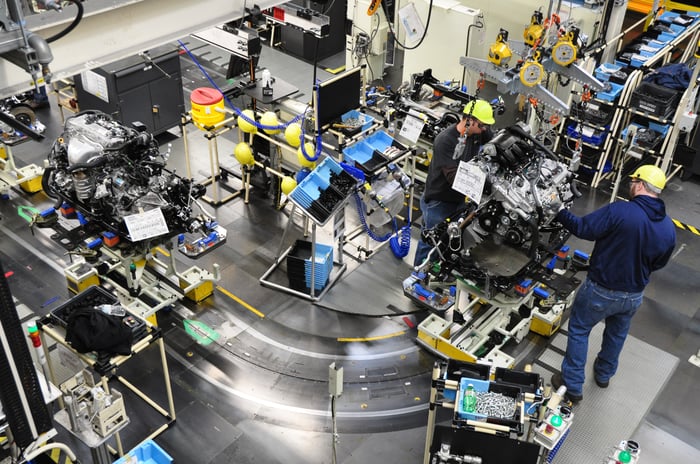 The lines at the plants, one located in Iwate and the other in Miyagi, produce the C-HR, Yaris, and Yaris Cross models for the domestic market. Their operations will be suspended for three to eight days next month, depending on the production line. All told, the shutdowns will affect the manufacture of 20,000 vehicles.

In its press release, Toyota stressed that these are "only vehicles which affect delivery to customers."

The chip shortage is due to a number of different factors. Demand is rising sharply as economies gear up to emerge from the pandemic, a trend exacerbated by the world's reliance on tech solutions to help it get through the outbreak. Finally, more and more goods in general require or are enhanced by a digital "brain," a trend that contributes to demand. As a result, many sectors of the global economy are affected.

For the moment, the shortage isn't hitting Toyota particularly hard, as those production lines represent a limited part of its overall domestic production. As one of the top global carmakers, Toyota has production facilities all over the world.

Still, even though the suspension is minor and small-time for now, investors should watch the company for signs of bigger shutdowns this summer. If the chip shortage worsens badly, several might be in store for the big carmaker.