Please ensure Javascript is enabled for purposes of website accessibility
Log In Help Join The Motley Fool
Free Article Join Over 1 Million Premium Members And Get More In-Depth Stock Guidance and Research
By Zhiyuan Sun - May 19, 2021 at 6:34AM

Buy these stocks, sit back, and watch them soar higher.

The best growth stocks often appear expensive, no matter the market environment. That's why, when shares dip, investors get excited about a new buying opportunity.

Indeed, Roblox (RBLX -6.17%) and Curaleaf Holdings (CURLF -2.28%) (CURA -1.18%) are two companies that appear overvalued to some, trading at 36 and 11 price-to-sales (P/S) ratios, respectively. However, both the crowdsourced video game developer and the nation's largest marijuana company are more than doubling their revenue year after year. Let's look at why they are the ideal choice for investors who are passionate about growth. 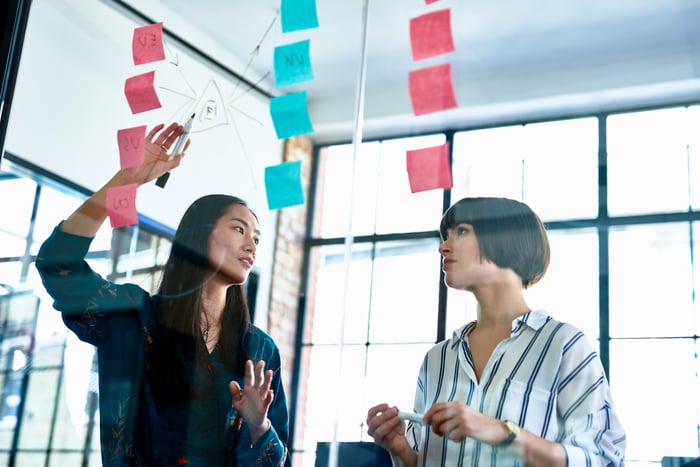 Roblox is a do-it-yourself video game publishing platform with over 7 million developers creating content played by roughly 43.3 million users each day. The company's infrastructure allows creators to launch their games across nearly all consoles in 180 countries. Meanwhile, players can connect with one another and spend Roblox's digital currency, Robux, for in-game purchases.

In the first quarter of 2021, Roblox's revenue increased by an astonishing 140% year over year to $387 million. What's more, the company's operating cash flow nearly quadrupled to $164.5 million over the same period. Its momentum is continuing well into the second quarter, with sales improving by 138% over the prior-year quarter.

The secret sauce behind Roblox's success is its reinvestment of earnings back into the platform. During the quarter, the company spent a combined $191 million, or nearly 49% of its sales, on research, development, infrastructure upgrades, and building trust and safety in its gaming community.

Its business model has been wildly profitable. Roblox currently has no debt and over $1.6 billion in cash on hand to finance future expansion. This is one hot gaming stock you don't want to miss.

Operating 106 dispensaries across 23 states, Curaleaf is currently the biggest cannabis company in the U.S. During Q1 2021, its revenue increased 147% over Q1 2020 to $260 million. Simultaneously, the company's adjusted operating income less noncash expenses (EBITDA) increased by 215% to $63 million.

Like Roblox, Curaleaf heavily invests in research and development, with over 180 up-and-coming cannabis products in its pipeline. It recently launched Select Squeeze, a THC beverage enhancer that can be mixed with any drink and works in as little as 15 minutes.

Since March 31, Curaleaf has opened four new stores. It is not only focused on the store count for expansion and new revenue streams, however. Curaleaf also wholesales its pot to nearly 2,000 dispensaries nationwide.

On top of that, the pot grower recently paid $286 million to acquire Emmac Life Sciences, a European cannabis producer. Curaleaf is looking to replicate its success in the U.S. and maintain a leading position in the European pot market. It has already received $130 million in institutional investments for its efforts.

Due to its size, innovation, and superb sales growth, Curaleaf is a great cannabis stock to buy now. It is an ideal bet for investors looking to capitalize off the $22 billion, and growing, U.S. marijuana industry.