Please ensure Javascript is enabled for purposes of website accessibility
Log In Help Join The Motley Fool
Free Article Join Over 1 Million Premium Members And Get More In-Depth Stock Guidance and Research
By Prosper Junior Bakiny – May 20, 2021 at 6:32AM

These two healthcare companies boast stellar dividend records, even when the market plunges.

Excellent dividend stocks are great to hold in times of economic downturns. Since the best of the best typically don't suspend -- or even reduce -- their dividend payments regardless of market and economic conditions, the regular and predictable dividend payments can help investors smooth out market losses.

With fears of a coming market crash fueled by concerns regarding inflation (among other factors), now might be a good time to add strong dividend-paying companies to your portfolio. Two great candidates are pharma giants Johnson & Johnson (JNJ -0.10%) and Bristol Myers Squibb (BMS). Let's see why both are worth buying if and holding on to if the market crashes, or for that matter, if it doesn't. 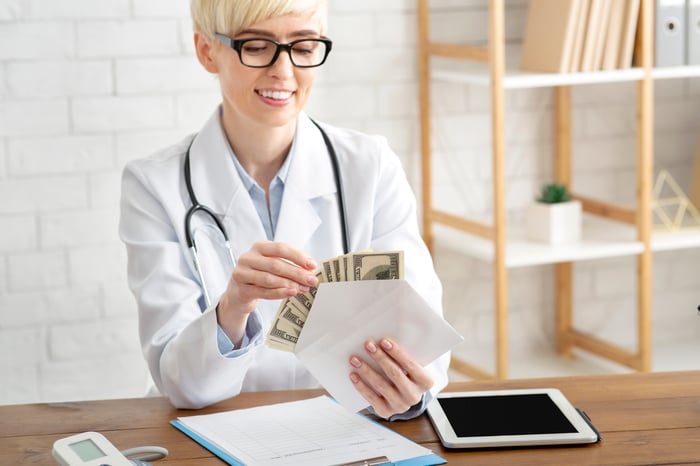 When looking for strong dividend-paying stocks, it is a good idea to start by checking the list of so-called Dividend Aristocrats -- that is, companies in the S&P 500 that have raised their payouts for at least 25 consecutive years. Healthcare juggernaut Johnson & Johnson is actually a Dividend King (the 50-plus club), having increased its dividends for a whopping 58 years in a row. Johnson & Johnson has been successful in good times and bad, because it develops and sells life-saving drugs and healthcare products -- something people need regardless of economic conditions.

This means that the company is likely to endure a market downturn, perhaps not unscathed, but better than most. How strong is Johnson & Johnson's pharmaceutical business? The company boasts several blockbuster products. There is cancer drug Darzalex, whose sales for the first quarter ending April 4 jumped by 45.6% year over year to $1.4 billion. It also counts plaque psoriasis medicine, Stelara, among its ranks.

During the first quarter, Johnson & Johnson's revenue from this medicine grew by 18.1% year over year to $2.1 billion. And those are just two of Johnson & Johnson's top-selling drugs. The company will also benefit from the sale of its COVID-19 vaccine, which received emergency use authorization (EUA) from the U.S. Food and Drug Administration (FDA) in late February.

It earned the green light from regulators in Europe in March. Although the distribution of this vaccine hit a snag as a result of a number of severe adverse reactions, healthcare industry regulators have allowed vaccination with it to resume with the addition of a warning label.

Elsewhere, Johnson & Johnson boasts well over two dozen programs in late-stage trials alone, not to mention others that are in their early stages of development. The company is in the habit of earning at least half a dozen regulatory approvals every single year. Johnson & Johnson's medical devices and consumer health (which sells over-the-counter healthcare products) businesses help diversify its revenue stream. The company is in an excellent position to continue growing its revenue and earnings year after year.

And with a dividend yield of 2.38% -- about compared to 1.38% for the S&P 500 -- and a reasonable cash payout ratio of 51%, Johnson & Johnson is a great dividend stock to add to your portfolio before the next bear market.

Bristol Myers Squibb is another pharma giant whose dividend investors can count on. The company may not be a Dividend Aristocrat, but it currently offers a yield of 2.88% and a cash payout ratio of 31.56%, which compare favorably to those of Johnson & Johnson and the S&P 500. With such a low payout ratio, Bristol Myers looks likely to continue rewarding shareholders through dividend increases: The company has grown its dividends by 22.5% in the past three years.

Bristol Myers' business is very healthy, in my view, and this is despite the negative impacts of the pandemic on its business. In the first quarter ending March 31, the drugmaker reported total revenue of $11.1 billion, a modest 3% increase compared to the prior-year quarter. Excluding the impact of the outbreak, the company's revenue would have grown by 8%.

One of Bristol Myers' best-selling drugs is multiple myeloma drug Revlimid, whose sales of $2.9 billion only increased by 1% year over year in the first quarter. Meanwhile, revenue from anticoagulant Eliquis jumped to $2.9 billion, 9% higher than the year-ago period. Revenue of $773 million from cancer medicine Pomalyst increased 8% from the first quarter of 2020.

Bristol Myers' blockbuster cancer drug, Opdivo -- which has been declining in sales for some time due in part to increased competition -- is set to have a great year thanks to recent regulatory approvals, including as a treatment for advanced renal cell carcinoma in combination with Exelixis' Cabometyx. This FDA decision came in January.

Management thinks sales of Opdivo will start growing again this year, which will work wonders for the company's top line, especially as the pandemic subsides. And with several dozen ongoing clinical trials, Bristol Myers will continue beefing up its lineup every year. That bodes well for the company's revenue, profits, and ability to continue paying strong and growing dividends to its shareholders, even if the market goes south.