Please ensure Javascript is enabled for purposes of website accessibility
Log In Help Join The Motley Fool
Free Article Join Over 1 Million Premium Members And Get More In-Depth Stock Guidance and Research
By Jim Halley - May 20, 2021 at 6:24AM

These three healthcare stocks have proven that growth and long-term trends are on their side.

Just as it doesn't make much sense to sail directly into the wind, investors need to be sure they're aligned with long-term trends. In the healthcare space, Dexcom (DXCM 2.59%), CVS Health (CVS -0.25%), and Medpace Holdings (MEDP 1.83%) all have momentum and strong fundamentals on their side.

Dexcom, which makes wearable continuous glucose monitoring devices and the software for them, has the rise of the number of diabetes patients worldwide fueling its growth. CVS, known as a drug store company but firmly established as a medical insurer thanks to its purchase of Aetna, is helped by increased foot traffic in its stores as vaccination rates increase in the U.S. Medpace has benefited as companies turn to clinical research organizations to more seamlessly run their drug trials and approval processes for new medical therapies and devices.

All three companies have raised their earnings guidance for the year, giving investors one more reason to be excited about their stocks. 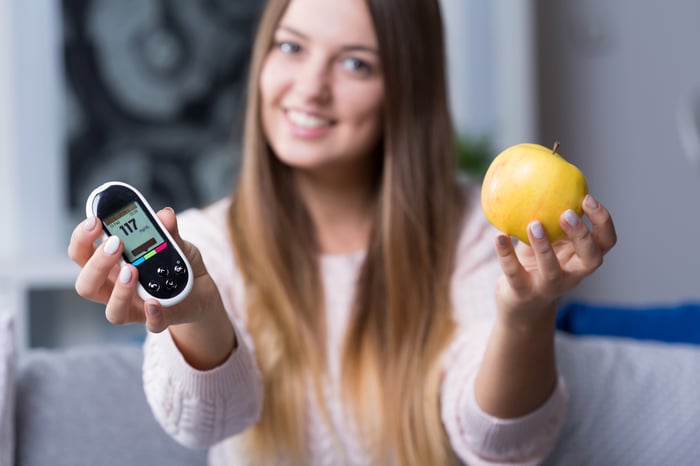 Dexcom's success is worth monitoring

Dexcom, a maker of continuous glucose monitoring (CGM) devices for diabetics, is down more than 10% this year and more than 20% over the past 12 months. Looking at that, you would think the company's fundamentals were in trouble, but that's not the case.

In the first quarter, the San Diego company reported revenue of $505 million, up 25% year over year. Net income was $40.3 million, or $0.41 per diluted share, compared with $19.9 million, or $0.21 per diluted share, for the same period in 2020. On top of that, the company raised its forecast for yearly revenue growth to between 17% and 22%, or between $2.26 billion and $2.36 billion. In the company's first-quarter earnings call, Dexcom CFO Jereme Sylvain said Dexcom has had seven consecutive quarters of revenue growth of $100 million or more.

And Dexcom's business is riding a trend that continues to expand. According to the American Diabetes Association's most recent numbers from 2018, 34 million people in the United States -- roughly 10.5% of the population -- have diabetes. The World Health Organization's figures showed that the numbers of people worldwide with diabetes more than quadrupled between 1980 and 2014.

CVS stock is up more than 29% this year and more than 38% over the past 12 months. Vaccination rates in the U.S. have risen, which is leading more people back to their local drugstores. In fact, as of April, 6.5 million people had gotten their COVID-19 shots at CVS drugstores. Another 23 million had received COVID-19 tests at CVS. The extra foot traffic is helping the company's bottom line as well as introducing potential future customers.

The Rhode Island-based company reported revenue of $69 billion in the first quarter, up 3.5% year over year. Earnings per share were $1.68 in the quarter, up 6.8% over the same period in 2020. The company's biggest growth was in its healthcare benefits segment, which showed $20.4 billion in revenue, up 6.7% over the first quarter in 2020. Revenue also grew in its other two segments, with pharmacy services showing 3.8% growth and retail up 2.3%. And the company increased its outlook -- it now expects annual adjusted per-share earnings between $7.56 and $7.68.

On top of that, CVS pays a consistent quarterly dividend of $0.50 a share, which equals a 2.37% yield at current prices. It hasn't raised its dividend since 2017, using the money instead to pay down its debt (including $3 billion in 2020 alone, dropping its still formidable debt from $67.7 billion to $63.6 billion) and invest in its growth. The company has reduced its debt-to-equity ratio by more than 37% over the past three years. 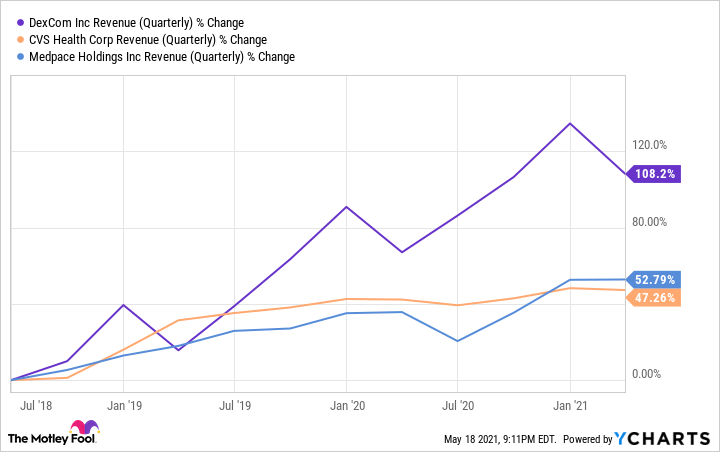 Medpace Holdings is a clinical research organization (CRO), a company that helps pharmaceutical companies and medical device companies run their trials and ease the process of U.S. Food and Drug Administration approval. The Cincinnati company's stock is up more than 17% this year and more than 88% over the past 12 months. It has shown revenue growth of 145.1% over the past three years.

Though business slowed during the pandemic because so much focus was spent on finding vaccines for COVID-19, there is a growing trend in the direction of CROs. Clinical trials are complex, and specialization in this area makes sense, particularly for smaller companies that don't yet have the full staff for clinical trials. The demand for tighter timelines has led to more companies outsourcing research to CROs. A report by Grand View Research puts the compound annual growth rate for the global CRO market at 6.6% from 2021 to 2028, reaching $66.1 billion by that time. Management raised the lower end of 2021 guidance in its first-quarter earnings report, saying it expects yearly earnings of $4.24 to $4.42 per share on revenue of $1.09 billion to $1.15 billion. The earlier guidance put the earnings between $4.08 and $4.50 per share with revenue of $1.075 billion to $1.175 billion.

A three-point play with opportunities

Of the three healthcare stocks, I like CVS the most because it appears to be the most underpriced, with a forward price-to-earnings ratio of 11, compared with 34 for Medpace and 146 for Dexcom. CVS also has a more dependable, albeit slower, rate of growth. I think the company has a lot to gain as the economy opens up, and its healthcare benefits segment is well situated to grow for years as the company should continue to add Medicare and Medicaid patients.

Similarly, I like Medpace's spot as a business that can use its expertise to make medical trials more efficient for companies. Dexcom may be the most overpriced of the trio, but it's hard to deny the growth that's in store for CGMs.