Please ensure Javascript is enabled for purposes of website accessibility
Log In Help Join The Motley Fool
Free Article Join Over 1 Million Premium Members And Get More In-Depth Stock Guidance and Research
By Nicholas Rossolillo - Updated May 21, 2021 at 5:49PM

This is a pricey video game competition bet, but it's worth a look anyway.

After an incredible run higher following its IPO via a special purpose acquisition company (SPAC) in December 2020, Skillz (SKLZ -1.05%) stock is getting hammered. Shares of the esports competition platform are down nearly 70% from their all-time high and are trading below where they were when the company completed its SPAC merger as of this writing.

Nevertheless, this mobile gaming business has a promising future. It may not jibe in the minds of some but the next global sports superstar might not be an athlete imbued with physical prowess but rather one exceptionally talented at playing a virtual game. After all, at some point in the not-so-distant past, many people scoffed at the idea of athletes getting paid to play with a ball. Esports is in its nascency, and Skillz is a top way to bet on the movement. But even after the big tumble in share price, this is no cheap growth stock. 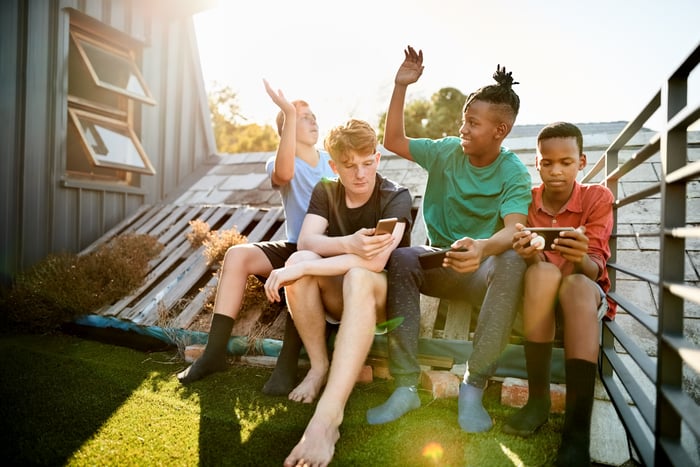 Bringing some competition to mobile games

This idea of monetizing a game through competition isn't new. Millions of athletes every year pay to be a part of organized sporting events like races and tournaments, and millions more enjoy spectating. But the same concept applied to video games is relatively new to most. Skillz is aiming to ramp up this esports community in the largest segment of the video game market: mobile.

Hundreds of millions of people around the globe play casual games on their smartphones. In fact, mobile games account for just over half of the $175 billion in annual global spending on video games. The Skillz platform adds a new layer of fun with competitions that can reward winners with cash prizes.

In this business model, game developers act as sporting-event organizers, players pay a small fee to enter the tournament, and Skillz is the intermediary between the two. It keeps about 15% of the gross proceeds after the developers are paid and prizes awarded.

The company's first-quarter 2021 earnings update demonstrates why there's excitement over the business model. Esports is growing fast, and considering the massive scale of professional physical sports (some estimates point to upwards of half a trillion in revenue each year worldwide), it's not difficult to fathom virtual gaming competition continuing its rise. The pandemic has certainly helped with consumer uptake, but mobile gaming was nonetheless a growth trend even before COVID-19 struck and will remain so going forward.

Not exactly what could be considered "growth at a value"

The Q1 report card was fantastic but not good enough to save the stock from a sell-off, although I'd categorize the recent plunge more as a reversal on what was becoming overhyped speculation. Even after the steep fall, Skillz is trading for about 16 times expected full-year 2021 revenue.

For a company still wading through plenty of red ink on the bottom line, that might be too high a price tag for many investors. However, Skillz had nearly $613 million in cash and equivalents and no debt on the books at the end of March 2021. That's more than three years' worth of liquidity if the company continues to burn cash at the rate it did in Q1.

But bear in mind that Skillz is not a static asset. This company will move toward profitability sooner than later and isn't at risk of running out of funds. It generated a gross profit margin (revenue minus cost of goods sold divided by revenue) of 95% in the first quarter and operated at a loss primarily because of sales and marketing, and costs related to its public listing via SPAC.

However, one area of concern is the rate of growth. Even at 16 times forward sales, Skillz stock is priced with the assumption it will continue to grow at a rapid pace for years to come. After expanding sales 92% to kick off 2021, the full-year outlook calls for growth to wind up "only" 63% higher than 2020. That implies a cool-off is coming in subsequent quarters (with revenue growth dipping below 63% to average out the 92% pace set in Q1) as Skillz starts to lap its initial pandemic-fueled boom from a year ago.

Perhaps Skillz will outperform its guidance, but all of this is to say the business won't be growing as quickly as it was in the recent past, and shares still carry a premium price tag. However, now that the valuation has been brought down to a more reasonable level, Skillz is on my watch list.

Personally, I'm not ready to bite just yet. If you buy, do so for the very long-term potential (no less than a few years). Remember to take it slow and keep an initial purchase small so you have room to buy more down the road if Skillz proves it has a durable business model capable of maintaining its high level of performance.