Please ensure Javascript is enabled for purposes of website accessibility
Log In Help Join The Motley Fool
Free Article Join Over 1 Million Premium Members And Get More In-Depth Stock Guidance and Research
By Daniel Sparks - May 21, 2021 at 6:33AM

Here's why this growth stock deserves a spot on your watch list. 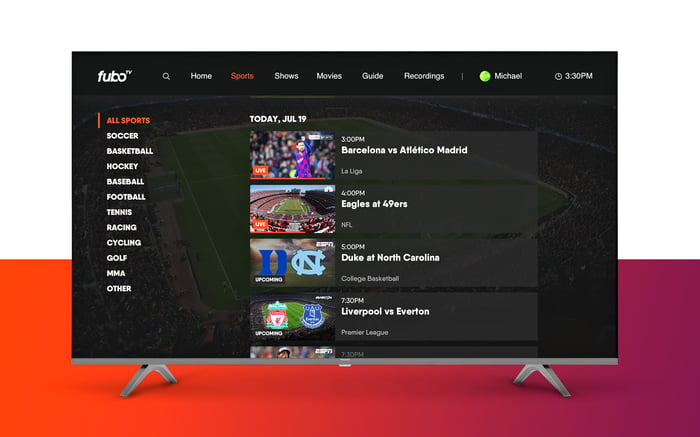 In fuboTV's most recently reported quarter, the company's live streaming service saw its subscribers grow 105% year over year to 590,430. Sequentially, this represented an addition of 43,000 new subscribers.

"This quarter represents an inflection point for our business," said fuboTV founder and CEO David Gandler on the company's first-quarter earnings call, "as for the first time, we overcame historical first-quarter seasonal trends and reported sequential revenue and sequential subscriber growth."

Of course, fuboTV's outsize market share gains don't necessarily mean that these other services won't continue growing. Sequential headwinds in subscriber numbers are normal in the first calendar quarter. But the significant pace of fuboTV's outperformance does suggest the company may have cracked the code for streaming live TV.

"Come for the sports, stay for the entertainment," management often says when describing its strategy. The company invests heavily in sports content and the sports streaming experience. Additionally, it uses major sports events as marketing opportunities to bring new subscribers to its platform. But it's also always adding entertainment beyond sports in order to keep subscribers engaged after they come for a sporting event or sports season.

In short, fuboTV is firing on all cylinders and it's shaping up to be a major threat to larger and more established live streaming services like YouTube TV and Hulu Live.