Please ensure Javascript is enabled for purposes of website accessibility
Log In Help Join The Motley Fool
Free Article Join Over 1 Million Premium Members And Get More In-Depth Stock Guidance and Research
By Parkev Tatevosian - May 22, 2021 at 8:15AM

The young company does something the entertainment giant couldn't.

Walt Disney (DIS -0.11%) and fuboTV (FUBO -11.01%) recently reported quarterly financial results. The two companies may appear vastly different, but they compete in one segment of the streaming market. In that segment, Disney's results showed it lost 200,000 subscribers in the first quarter. In contrast, fuboTV added 42,550 subscribers. In short, the new upstart is making gains against the entertainment giant.

fuboTV's share price is up by more than 20% since it reported Q1 earnings as investors give it credit for an unprecedented quarter. So what was it in Disney's results that makes fuboTV's quarter look even better? 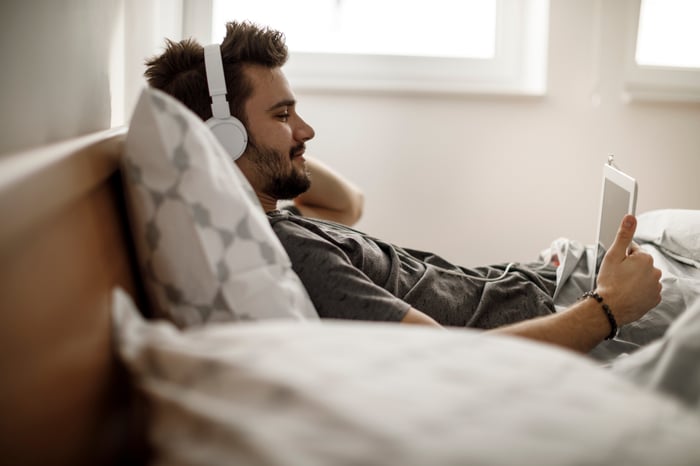 Before I get into fuboTV's excellent quarter, let me premise that by looking at Disney's subscriber figures. Disney announced that it added 12.6 million streaming subscribers across all its services (Disney+, Hulu, and ESPN+). However, note that Hulu has two separate services: a streaming video on demand (SVOD) (lower cost) and a vMVPD (higher cost). And while the SVOD Hulu service gained 2.2 million subs from the previous quarter, the vMVPD service shed 200,000 subs.

Here's what Disney's CFO Christine McCarthy had to say on the matter on the Q2 conference call: "Paid subscribers to Hulu Live declined modestly to 3.8 million from 4 million at the end of Q1, which we attribute primarily to the $10 price increase we took in December, in addition to a modest impact from seasonality."

Breaking down the seasonality, the main reason paid subscriptions dropped from Q1 to Q2 at Hulu's Live TV service is the National Football League ending its season. Many folks sign up for the service to get access to NFL games, and when the season ends, some of them cancel their service.

fuboTV surprises itself and investors

fuboTV experiences the same kind of seasonality that Disney goes through. In fact, going into its most recent quarter, fuboTV has never had a net positive subscriber addition going from Q4 to Q1. That is certainly to be expected. fuboTV is a sports-centric vMVPD service, so its audience is generally sports fans.

Therefore, management guided investors to expect fuboTV to shed roughly 22,000 subscribers from the previous quarter going into its first quarter. However, when fuboTV announced first-quarter earnings, it revealed that it actually gained 42,550 subscribers in the quarter. For the first time in the company's history, it added customers from Q4 to Q1.

Add that to the fact that Disney's Hulu Live TV still lost subs, and you get a bright picture of fuboTV's potential. Indeed, according to Nielsen Media Research, fuboTV's addition of roughly 303,000 subscribers since the first quarter of 2020 is more than four times the growth of the overall vMVPD market during the same time period.

It's no surprise that investors sent shares of this streaming content provider up by more than 20% following its earnings announcement. fuboTV is gaining market share in a rapidly growing market.