Please ensure Javascript is enabled for purposes of website accessibility
Log In Help Join The Motley Fool
Free Article Join Over 1 Million Premium Members And Get More In-Depth Stock Guidance and Research
By Beth McKenna - Updated May 23, 2021 at 12:36PM

The 3D printing company's CEO talks competitive advantages and ramping up investments in the healthcare business both organically and through acquisitions.

Earlier this month, 3D Systems (DDD -2.08%) reported first-quarter 2021 results that easily beat the Wall Street consensus estimates for both revenue and earnings. The stock skyrocketed 35% the next day.

In the first quarter, the 3D printing company's revenue rose 7.7% year over year (and 17% excluding the impact of divestitures) to $146.1 million. Growth was driven by continued strength in the healthcare segment and a stabilizing of the industrial segment, which was hard hit by the fallout from the COVID-19 pandemic.

Earnings releases tell only part of the story. Following are two key things from 3D Systems' Q1 earnings call that investors should know. 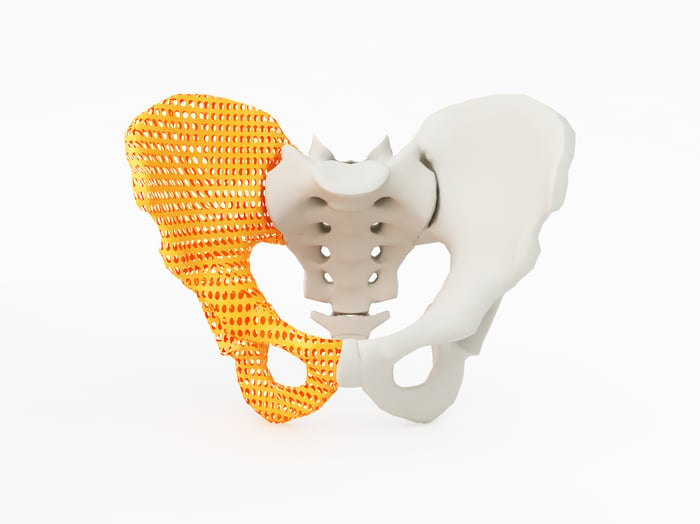 Third, as one of the largest and most experienced companies in the industry, we have the scale and the infrastructure to not only support our customers' needs when they initially implement additive manufacturing, but also sustain them over the lifetime of their equipment by providing key services and consumables that are vital to their ongoing business success.

As to Graves' first point, 3D Systems does have the broadest offerings in the 3D printing industry in terms of technology to my knowledge, at least among publicly traded companies. It has several polymer technologies and at least one metal 3D printing technology.

For a couple of points of comparison: Rival Stratasys (SSYS -0.97%), another well-established pure-play 3D printing company, doesn't have a metal 3D printing technology. Newly public Desktop Metal (DM 2.13%) is just in the early stages of commercializing its metal technology and only recently expanded into polymers via its February acquisition of EnvisionTEC.

His second point about having "the brightest and most creative application engineers" is too subjective to address.

I'll also agree with Graves' third point about 3D Systems having a scale and experience advantage, at least relative to most other players. That said, there's a caveat here. Under the prior two CEOs, the company prematurely released products that had quality issues. So, while scale does usually provide various advantages, it won't do so if customers are hesitant to buy a product from a company due to concerns about quality. Hopefully, this issue is largely behind 3D Systems, but investors still need to keep an eye on it.

2. Ramping up its healthcare business organically and through acquisitions

As you can see in our numbers for Q1, we're seeing rising demand for new applications, particularly in our healthcare business. To meet this demand forecast, we're expanding our Denver, Colorado, location by roughly 50%. [...] Through this next phase of investment [...] we'll be able to reduce time to market for new medical applications, continue expanding our product offerings, and better support the holistic needs of our growing healthcare customer base.

In Q1, 3D Systems' healthcare revenue surged 39% year over year to $72.5 million. This segment accounted for 49.6% of the company's total revenue of $146.1 million. So, its business is now essentially evenly split between healthcare and industrial.

As Graves said on the prior quarter's call, the company's healthcare business "brings a bit higher gross margin on average than our industrial business." So, naturally, it makes great sense to focus somewhat more on applications that are more profitable.

In addition, 3D Systems announced several days before it released its Q1 results that it had acquired Allevi, a small Philadelphia-based bioprinting company. Bioprinting refers to using 3D printing technology to print animal and human cells to produce three-dimensional, functional tissues. This was a smart move and expands the company's involvement in this space, as it's been collaborating with United Therapeutics (UTHR 1.28%) in this realm since 2017.

Graves said one key intermediate-term application of bioprinting is to help pharmaceutical companies speed up the drug development process. A longer-term goal of those working in this space is to print fully functional solid human organs such as the liver, heart, and kidneys for transplant purposes. Regenerative medicine, as it's often called, is in its infancy, but it has humongous growth potential.