Please ensure Javascript is enabled for purposes of website accessibility
Log In Help Join The Motley Fool
Free Article Join Over 1 Million Premium Members And Get More In-Depth Stock Guidance and Research
By Jeremy Bowman - May 23, 2021 at 12:00PM

Finding deals isn't so easy in today's frothy market. But the good news for value investors is that cheap stocks are coming back into fashion as investors rotate out of growth stocks on concerns about rising interest rates.

Earnings season just highlighted a pair of gems that reported stellar quarterly results but still seem to be overlooked by Wall Street. Let's see why Target (TGT 0.51%) and Children's Place (PLCE 6.17%) look like great bargains to scoop up today. 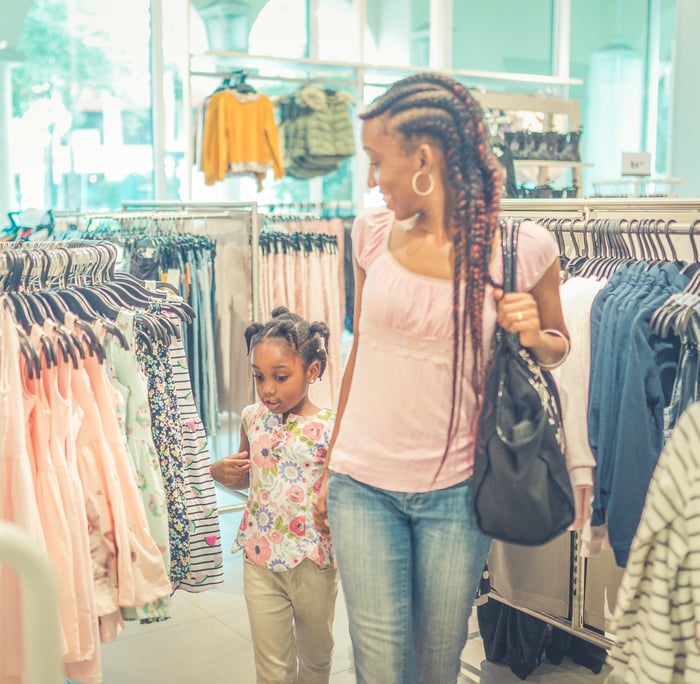 Target (TGT 0.51%) has been one of the most impressive stories in brick-and-mortar retail in recent years. The big-box chain has revamped itself into a unique omnichannel retailer with a range of popular exclusive brands and same-day fulfillment options that are difficult to match.

The company's first-quarter report showed why Target's new strategy has been so successful. Comparable sales jumped 22.9%, and two-year comps were up more than 35%. Profitability also surged thanks to 36% growth from the company's owned brands -- a company record -- and the success of its store-based fulfillment strategy, which is much more cost effective than shipping e-commerce orders from a warehouse. Target's operating margin in the quarter improved to 10% and adjusted earnings per share jumped to $3.69, also a record, which easily beat the analyst consensus at $2.25.

Target stock now trades at a price-to-earnings ratio of 18, compared to the S&P 500 at 44, a great price for a stock that still has promising long-term growth prospects like its small-format stores and its omnichannel business.

While comparisons will get more difficult over the rest of the year, there's a good chance Target will continue to surprise to the upside -- it's carrying significant momentum into the economic reopening thanks to the success of strategies like owned brands and same-day fulfillment services such as Drive Up.

Children's Place: Much stronger than it looks

One of the biggest surprises this earnings season was Children's Place (PLCE 6.17%), the children's apparel chain that was mostly forgotten during the pandemic. The mall-based chain crushed analyst estimates in its first-quarter earnings report, posting earnings per share of $3.25, a quarterly record, compared to estimates of just $0.06. Revenue topped 2019 levels by 6% even though the company had 27% fewer stores than it did two years ago.

Children's Place mostly struggled during the pandemic, but it took the opportunity to accelerate its store optimization strategy, closing down underperforming locations and shifting to e-commerce investments, and that strategy is clearly paying off. Operating margin reached 15% in the period, an impressive feat for any retailer, thanks to the reduction in occupancy costs from the store closings. CEO Jane Elfers said steady-state digital penetration now made up about 50% of total sales. Digital is its highest-margin channel.

The company declined to give guidance, but there are a number of tailwinds in its favor over the remainder of the year. Children's Place normally makes most of its profits in the second half of the year thanks to the back-to-school and holiday seasons, and we should expect that pattern to repeat this year. This year it will also benefit from the new child tax credit, which gives most American families $250-$300 per month starting in July, as well as the return of children to school in the fall, as well as a broader tailwind in apparel as most shoppers delayed clothing purchases during the pandemic.

Extrapolating its first-quarter EPS results for the rest of the year would give the company $13 in EPS this year, meaning its P/E ratio is just seven. Based on the tailwinds in the second half of the year, there's a good chance that the company could top that mark for the full year. At a share price of less than $100, that would truly make Children's Place a bargain today.