Please ensure Javascript is enabled for purposes of website accessibility
Log In Help Join The Motley Fool
Free Article Join Over 1 Million Premium Members And Get More In-Depth Stock Guidance and Research
By Ryan Henderson - Updated May 25, 2021 at 5:14PM

Despite jumping more than 30% on its first trading day, Procore still might be worth a look.

Procore Technologies (PCOR -1.49%), the construction management and workflow platform, completed its IPO on the New York Stock Exchange on Thursday, and its shares got a nice first-day jump before settling back to their opening trade price of around $84 a share four trading days later.

Procore was set to go public last year but opted to take a private funding round instead due to uncertainty caused by the pandemic. With that extra year of operations under the company's belt, let's look at the business model as it now stands and see whether Procore deserves its public valuation and if it might be a stock to consider adding to your portfolio.

Before diving into the valuation, it's prudent to understand the landscape that Procore operates in. 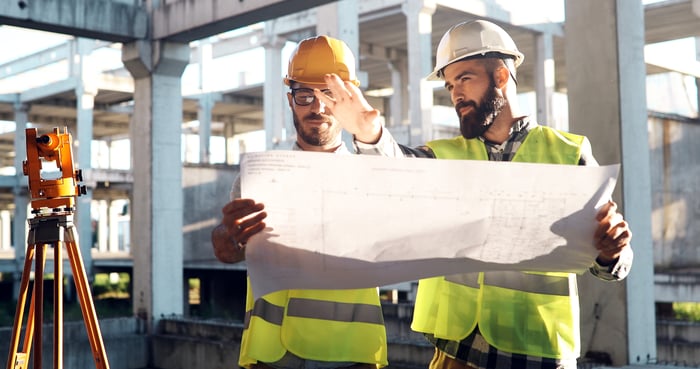 Unlike other industries, construction requires specified solutions due to its unique complexities. Traditional software solutions are still commonly used, but for the bulk of the construction management process, they are inadequate for meeting firms' needs.

On any given project, there are a number of different stakeholders, each serving their own role. Whether they're general contractors, subcontractors, architects and engineers, or even owners, each entity has to be on the same page and able to efficiently communicate with one another to avoid project delays.

These different stakeholders are also operating from both the office and the job site simultaneously, so they require a central destination to store files and collaborate. This is where Procore comes in.

It now serves more than 10,000 business customers globally and helps speed up project times by bringing the industry into the modern age. Whether it's streamlining communication from the office to the job site, uploading digital documents, assuring quality and safety specifications, or managing field productivity, Procore provides a comprehensive digital operating system to its customers.

Procore by the numbers

Procore is almost 20 years old, but its platform saw very little adoption until roughly 10 years ago. Thanks to the proliferation of mobile devices like smartphones and tablets, team members are now able to stay connected without having to go to and from the office. This trend has led to rapid expansion for Procore over the past decade.

In 2020 alone, Procore generated $400 million in revenue, a 256% increase from three years prior. The company is also home to more than 1.6 million users around the globe with more than $1 trillion of construction volume run on the platform.

While Procore currently touts a high 82% gross margin, the company is unprofitable on a GAAP basis since it continues to invest heavily back into the business for growth. With construction being one of the least digitized industries in the world, it's no surprise that management is spending lots of money on sales and marketing as it goes after a huge base of potential customers. In fact, in 2020, Procore spent roughly 78% of its revenue on expenses related to sales and marketing or research and development.

As Procore was gearing up for its public offering, shares were expected to trade between $60 and $65, finally debuting at $67 a share. This gave the company an implied market cap of over $8 billion. However, on the first day of trading, demand exceeded expectations and sent the shares up as much as 37% at their high point.

Now sporting a $10.9 billion market cap, the company trades at a price-to-trailing-12-month-revenue of about 28 times. That's nearly double the valuation of its closest competitor, Autodesk (ADSK -2.22%), which trades at a multiple of 16.

Although Procore should be profitable at scale (management is shooting for a 20% operating margin) and the company seems to have a long runway for growth, that kind of valuation is a hefty price to pay.

As investors have seen with the recent decline of previously hot IPOs like Airbnb (ABNB -1.29%), Poshmark (POSH -1.65%), Coupang (CPNG -0.94%), and many others, it can pay to be patient and buy-in at a lower price point. While there's certainly a lot to like about the business, it's probably best to wait on the sidelines for the time being.

Procore Just Delivered Another Quarter of Growth: Here's What Shareholders Need to Know