Please ensure Javascript is enabled for purposes of website accessibility
Log In Help Join The Motley Fool
Free Article Join Over 1 Million Premium Members And Get More In-Depth Stock Guidance and Research
By Howard Smith - May 25, 2021 at 3:04PM

An analyst upgrade and some positive political momentum are recent tailwinds for cannabis stocks.

High-growth stocks are back in favor with investors so far this week, and cannabis stocks are gaining today as a result. Canadian growers Tilray (TLRY -3.45%), OrganiGram Holdings (OGI -4.20%), and HEXO (HEXO 1.67%) are all reversing declines seen over the past three months. Though off intraday highs, as of 1:30 p.m. EDT on Tuesday, shares of these companies traded as follows:

In addition to general market sentiment, today's move got a boost from an analyst upgrade in the sector. Fellow Canadian cannabis company Canopy Growth (CDC -0.44%) was upgraded from neutral to buy at equity research firm MKM Partners. The analysts noted overall sentiment in the sector is already low, which might be why other cannabis names also reacted. There is also momentum building in the U.S. surrounding potential federal legalization, which could open a huge new market for Tilray, OrganiGram, and HEXO. 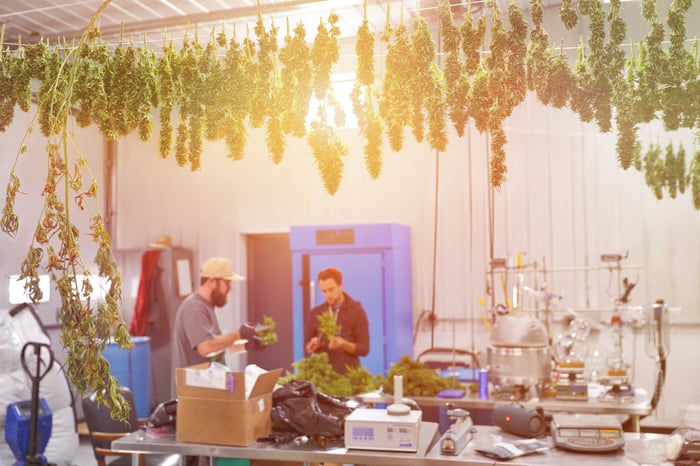 The latest move supporting U.S. legalization came earlier this month when Ohio Rep. Dave Joyce and fellow Republican Don Young, from Alaska, introduced the Common Sense Cannabis Reform for Veterans, Small Businesses and Medical Professionals Act. The congressmen cite actions being taken at the state level and said, "continued cannabis prohibition is neither tenable nor the will of the American electorate." It's notable that Republicans are sponsoring the bill, which gives more momentum to the drive to remove marijuana from the controlled substances list.

According to Joyce's office, the bill would "create a federal pre-emption to protect financial institutions and other businesses in non-cannabis legal states so that they can service cannabis companies." That would be key for Canadian cannabis companies to be able to do business in the U.S. Canadian companies like Tilray are already active outside Canada, and have even begun to prepare for entry into the U.S. Tilray has grown its medical cannabis business in Europe, and after its recent combination with Aphria, has access to distribution infrastructure in the U.S. through the SweetWater Brewing business.

Also outside Canada, OrganiGram entered into a multiyear agreement to supply dried flower to one of Israel's largest and most established medical cannabis producers last year. Earlier this month, HEXO announced its first U.S. production facility through a subsidiary in Northern Colorado. The company said in a statement, "The Colorado facility will be instrumental to successfully executing on our U.S. strategy."

The cannabis sector is volatile and in many respects speculative. There's no guarantee marijuana will be legalized or decriminalized federally in the U.S., or that new states will join those that have already passed such legislation. Investors should expect sharp movements to continue in the sector, and realize that any investment thesis may take many years to play out. Along the way, there will be days like today with sharp movements in the stocks.