Please ensure Javascript is enabled for purposes of website accessibility
Log In Help Join The Motley Fool
Free Article Join Over 1 Million Premium Members And Get More In-Depth Stock Guidance and Research
By Demitri Kalogeropoulos - May 26, 2021 at 6:54AM

Both companies look like attractive bets on the reopening boom.

The waning COVID-19 threat in many countries has Wall Street excited about a sharp growth spike on the way, especially in the latter half of 2021. The so-called "reopening boom" might be especially strong in consumer niches that were hit hard during maximum social-distancing efforts in the past year.

With that in mind, let's look at two world-class businesses that could see unusually high demand in the coming quarters. Starbucks (SBUX -0.01%) and Coca-Cola (KO -0.65%) each bring attractive qualities to the party, but that doesn't mean they're interchangeable investments.

Let's see why you might prefer one over the other right now. 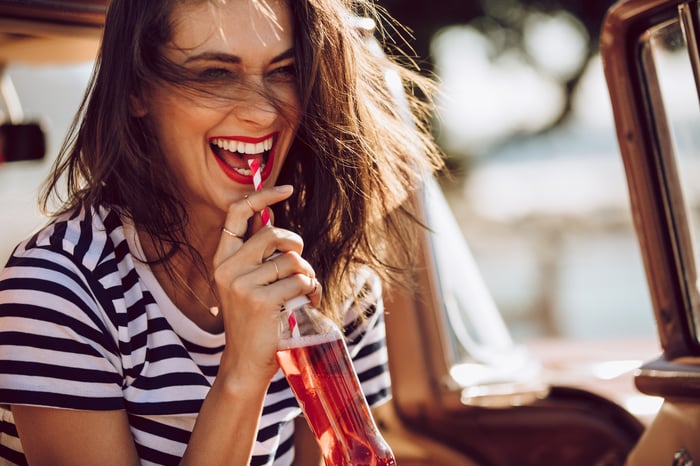 Why Coca-Cola is a winner

Coca-Cola will appeal to value-focused investors who prize dividend income and aren't afraid to take on some modest risk. Sure, the beverage giant shrank during 2020, in contrast with peers like PepsiCo (PEP -0.40%), which saw solid growth. That slump implies that Coke can't do much about sluggish sales if COVID-19 continues to depress consumer mobility through late 2021.

But the flip side to that weakness is a potential head-turning rebound over the coming months as people again start frequenting crowded sporting events, concerts, and restaurants.

Meanwhile, the underperformance of the stock in the past year has pushed Coke's dividend yield to roughly 3% compared to 2.8% for PepsiCo and just 1.5% for Starbucks. If you prefer highly profitable businesses, you'll also gravitate toward the beverage titan. Coca-Cola routinely turns over 30% of sales into operating profit, compared to Pepsi's 15% margin and Starbucks' 8%. That gap protects investors' returns in a slump -- and amplifies earnings growth during demand booms.

Why you might want an extra shot of Starbucks

Still, Starbucks is a great stock for investors seeking more of a sure thing heading into the second half of 2021. The company's coffeehouse business is already nearly fully recovered from the pandemic, after all. Its U.S. market grew 9% in the most recent quarter, helping profitability spike back into double digits.

Starbucks is seeing enthusiastic demand for premium products, including cold brews, refresher drinks, and breakfast sandwiches. Its digital sales channel is booming, and an over 100% sales spike in China last quarter implies similarly head-turning spikes ahead for Europe and the U.S.

The chain recently elevated its short-term outlook, and management believes customer traffic might soar as people prioritize reconnecting in person after social distancing for over a year. "We have positioned Starbucks for the inevitable great human reconnection that we see unfolding in the U.S. and will propagate in every market around the world," CEO Kevin Johnson said in April. The good news is those bullish words are backed up by sharply improving operating trends.

You'll have to pay a premium for either stock. Investors are paying nearly 6 times sales for Starbucks today, which is on par with surging Chipotle. Coca-Cola is fetching a valuation of 7 times sales, or more than twice PepsiCo's ratio.

The two businesses aren't directly comparable on those valuation metrics, but Coke has gotten cheaper relative to the wider market in the past year while Starbucks' stock has tracked the S&P 500's over 40% rise since May of 2020.

That's why, if you're more concerned about potentially overpaying, you might prefer Coca-Cola stock right now. However, each of these strong businesses is likely to deliver robust returns to investors who hold the stock, regardless of whether or not a sharp growth rebound gathers momentum through the rest of 2021.