Please ensure Javascript is enabled for purposes of website accessibility
Log In Help Join The Motley Fool
Free Article Join Over 1 Million Premium Members And Get More In-Depth Stock Guidance and Research
By Dennis Hobein - May 26, 2021 at 6:45AM

The company is much more than a bike with a screen.

It's undeniable that the pandemic has turbo-charged the growth trajectory of connected-fitness company Peloton (PTON 13.60%). A quick review of the company's quarterly results confirms that notion, as top-line growth swelled from high double-digit rates in 2019 to over 230% for the quarter ending on June 30, 2020.

Stay-at-home mandates, the closure of fitness centers, and rising interest in health and wellness were core elements of Peloton's ascension. A reasonable conclusion is that the company has already reached the pinnacle of its growth curve as these catalysts fade with the widespread rollout of vaccines. 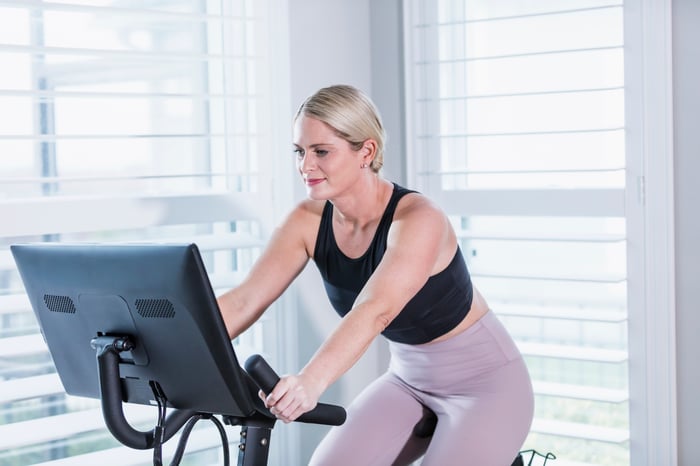 As Peloton laps very challenging year-over-year comparisons, that anticipated growth deceleration will come to fruition. A slowdown from those sky-high levels, though, does not mean that Peloton will suffer a collapse in growth.

To the contrary, I believe that this is only the beginning of its growth story. Not only have Peloton's bikes and treadmills become embedded into the daily routines of millions of people, but its rapidly expanding subscriber base may represent the next gear in its evolution.

It's been a bumpy ride, but strong results spin a brighter narrative

The day before Peloton reported fiscal third-quarter earnings on May 6, 2021, the stock plunged lower by over 14%. Clearly, investors were bracing themselves for bad news in the wake of two serious developments.

After Peloton ramped up capacity in the second half of 2020 to cut down on shipping delays, severe port congestion on the west coast produced a new setback in early 2021. To remedy that situation and to avoid another public relations meltdown, Peloton invested over $100 million in air shipments and in the relocation of containers to less congested ports.

On a more disturbing note, in mid-March, Peloton disclosed that a child was involved in a fatal accident involving the Tread+ product. Soon thereafter, the Consumer Product Safety Commission (CPSC) released a warning on the Tread+, prompting Peloton to temporarily cease production and to recall the product with a full refund.

Against this gloomy backdrop, Peloton delivered a noisy quarterly report that hashed out the effects of these troubles. Specifically, connected fitness product gross margin slid by 385 basis points due to expedited shipping costs, while the Tread+ recall cut Peloton's fourth-quarter revenue guidance by $165 million to $915 million.

However, this anticipated downbeat news was eclipsed by a surprising revelation: User engagement and subscription growth accelerated, even as the effects of the pandemic diminished.

Still breaking a sweat as life returns to normal

Given the meteoric growth of its bikes and treads, it's tempting to view Peloton as a fitness equipment maker with a subscription business on the side. This perception, though, is short-sighted in my view.

Revenue growth accelerated to 141% from 128% in the second quarter. The upswing represents the first hint that the highly anticipated growth crash isn't materializing, but other details tell the full story.

As life returned to some degree of normalcy, Peloton owners actually increased their usage -- by quite a bit. During the third quarter, the company averaged 26.0 monthly workouts per connected fitness subscription, compared to 17.7 in the year-ago period.

There's also no evidence that subscribers are leaving, as evidenced by the monthly average churn of 0.31%, the lowest number Peloton has seen in six years.

Bolstering these solid figures is Peloton's commitment to expand and enhance its workout content. In fact, the company offers classes on many disciplines that are separate from its equipment, including strength training, yoga, stretching, and outdoor running.

Exercising a growth strategy through subscriptions

Connected fitness subscriptions currently account for about 20% of Peloton's revenue, but that number looks poised to rise after it added a record 414,000 members during the third quarter.

More impressive was the 404% surge in digital subscriptions to 891,000. These are users who may not even own a Peloton bike or Tread and pay a subscription to access fitness classes.

This remarkable growth is bullish for two reasons. First, these subscribers are upgrading to connected fitness memberships at rates above Peloton's historical 10% average, illustrating that the digital app is becoming a more powerful gateway to equipment purchases. Second, the success of its digital app diversifies Peloton's revenue streams.

Although Peloton's growth rates may take a breather over the next couple of quarters, the rapid progression of its subscription business will keep the company in great shape over the long term.