Please ensure Javascript is enabled for purposes of website accessibility
Log In Help Join The Motley Fool
Free Article Join Over 1 Million Premium Members And Get More In-Depth Stock Guidance and Research
By Dan Caplinger - Updated May 26, 2021 at 1:32PM

Wednesday's big gains could be just the beginning.

The Nasdaq Composite (^IXIC 0.00%) has seen its fair share of turbulence in recent months, with impressive gains and gut-wrenching declines. Yet many investors gravitate toward the Nasdaq  because of all the high-growth stocks that they can find there. On Wednesday morning, those stocks were largely in favor, helping to push the index up more than half a percent as of 11:15 a.m. EDT.

The peak of earnings season is long behind us, but many prominent companies offer up their financial reports at other times. On Wednesday, shareholders got their first chances to react to the latest news from a couple of well-known companies, as both Zscaler (ZS -0.94%) and Urban Outfitters (URBN 4.67%) weighed in on how their respective businesses have been faring since the U.S. has begun getting its COVID-19 crisis under control.

Shares of Zscaler were up by more than 12% on Wednesday morning. The cybersecurity specialist had good things to say about its performance recently. 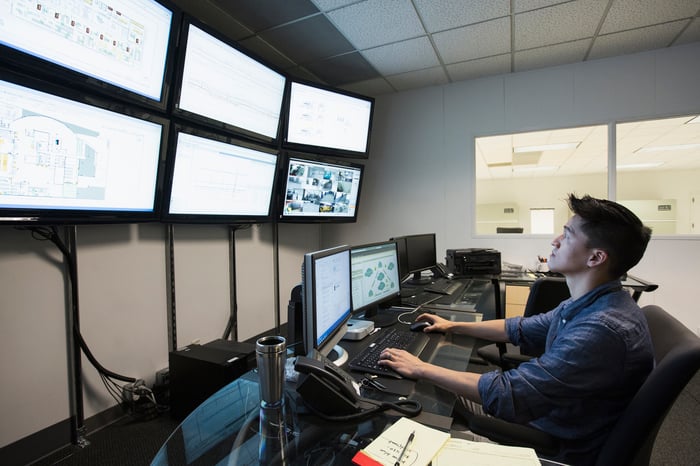 Zscaler's fiscal third-quarter results continued a long string of quarters of strong growth. For the period ending April 30, revenue jumped 60% year over year, with calculated billings rising at an even more rapid 71% pace. Zscaler more than doubled its adjusted net income from the third quarter of its fiscal 2020.

Strategic moves have been among the key drivers of Zscaler's growth, and the company is continuing with its efforts in that vein. Having acquired cloud infrastructure entitlement management specialist Trustdome and signed an agreement to buy active defense technology provider Smokescreen Technologies, Zscaler hopes to flesh out its platform, making it even more comprehensive to meet the needs of its clients. Similarly, integrations and partnerships with other cybersecurity players such as CrowdStrike Holdings (CRWD -1.36%) and IBM (IBM 0.79%) point to its growth opportunities.

Many investors were looking forward to Zscaler's results as a signal of how software-as-a-service companies more generally would fare this earnings season. Based on its gains, Zscaler seems to be indicating that all systems are go for further growth.

Elsewhere, Urban Outfitters' stock price rose by 14%. The retailer's fiscal first-quarter 2022 results looked good not just compared to those from the early stage of the pandemic, when widespread lockdowns shuttered nonessential retailers, but also in relation to its figures from two years ago.

Urban Outfitters gave the details on its success in the period, which ended April 30. Revenue was up 58% from year-ago levels and up more than 7% from two years prior. The company's Free People store concept performed the best, with gains of 44% compared to the same period in calendar 2019. Its namesake Urban Outfitters stores also saw reasonable gains of 9%, but Anthropologie Group lagged behind with just a 1% rise in comps. Even though wholesale segment revenue more than tripled year over year, it still lagged behind its levels from two years ago.

Several stock analysts weighed in with more favorable views of Urban Outfitters' future. That included nearly half a dozen price target increases and one upgrade, albeit from underweight to neutral. That's generally consistent with the negative view that most investors have had about conventional retail recently, as well as signs of improving conditions for the industry.

With Wednesday's share price gains, Urban Outfitters stock is approaching the all-time high it hit in 2018. This goes to show the level of confidence that investors have that the economy is back near full strength and poised to power forward from here.

Why Did Zscaler Stock Drop 16% in April?

Zscaler, Beyond Meat Weigh on the Nasdaq's Friday Recovery

Why Zscaler Stock Gained 12.7% in June