Please ensure Javascript is enabled for purposes of website accessibility
Log In Help Join The Motley Fool
Free Article Join Over 1 Million Premium Members And Get More In-Depth Stock Guidance and Research
By John Ballard - May 27, 2021 at 8:08AM

This top video game producer has been attracting more players to its games, which portends good things to come.

Share prices of Take-Two Interactive (TTWO -1.30%) have bounced by 10% since May 18, when the company delivered fiscal fourth-quarter earnings that once again beat analysts' estimates by a wide margin.

Take-Two's non-GAAP earnings per share have come in at least 30% higher than the analysts' consensus estimate over the last four quarters. The only negative point in the quarterly report was management's outlook, which forecasts that bookings will decline by 9% in fiscal 2022. But that didn't faze investors, who were apparently more interested in management's comments about the game development pipeline, and what that could mean for the company's medium-term growth.

Take-Two's fiscal 2021 Q4 ended March 31. Here's what management had to say on the earnings call and three reasons the company sees more growth ahead. 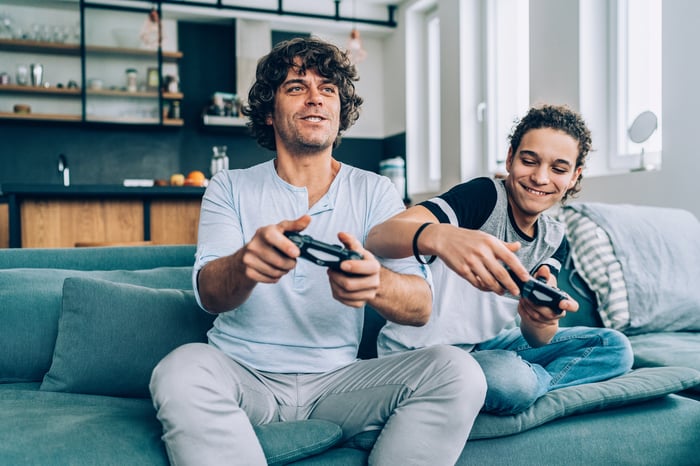 Nearly all of Take-Two's franchises outperformed expectations. Here are the notable standouts:

The common theme was the growth in users playing these games. Zelnick believes "the pandemic initiated a transformational shift in entertainment consumption." He added, "We anticipate that the overall addressable market for our industry will be notably larger going forward than it was pre-pandemic."

Take-Two is backing up this position with significant investments in new titles and development talent.

"[W]e have over 60 titles that we plan to deliver over the next three years, and we are making significant investments in key areas such as marketing, personnel, and IT to bring our pipeline to market," CFO Lainie Goldstein said.

These new titles range from free-to-play mobile games to add-on experiences that supplement existing franchises. But it doesn't appear that the list being referred to includes the sixth installment of the Grand Theft Auto franchise -- an eventual sales catalyst that the company continues to dangle in front of investors.

Take-Two's research and development spending has more than doubled over the last five years, with much of this increase going toward a larger development staff. 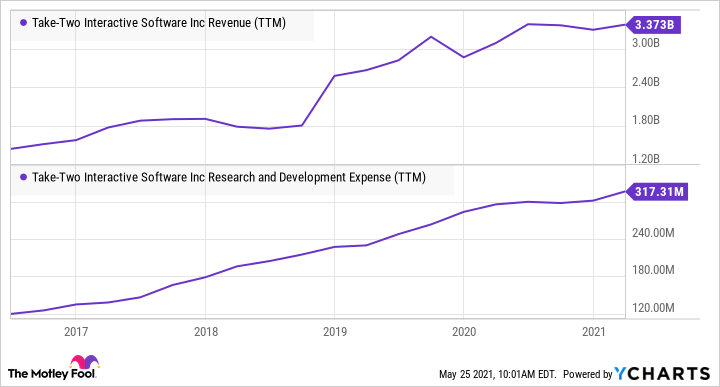 "We bolstered the depth of our creative teams by hiring more than 700 new developers, including through the acquisition of several talented studios which will help us expand our capabilities and grow our business," Zelnick said.

The growth in players across Take-Two's top franchises has come at an opportune time, with management preparing to launch these new experiences. 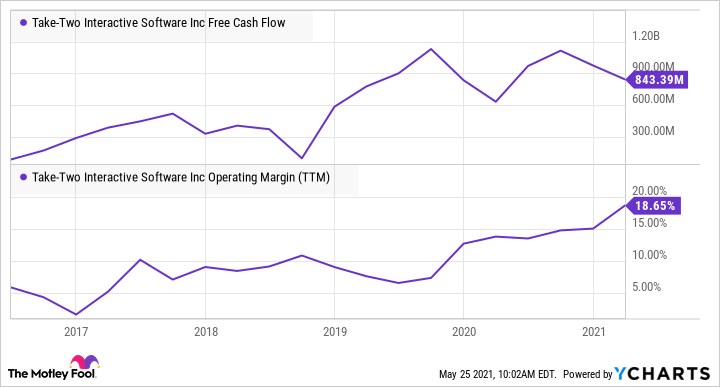 Management has asserted that Take-Two can achieve new records of operating performance over the next few years. And the combination of new titles and a larger base of players to sell those titles into certainly lends credibility to that longer-term outlook.

Take-Two plans to release 21 new titles in fiscal 2022. In the near term, investors should pay attention to how the upcoming new releases impact the performance of recurrent consumer spending. Maintaining high engagement in these games long after the initial release is a top strategic priority for the company, and will be a key factor in how well it can deliver returns to investors over time.