Please ensure Javascript is enabled for purposes of website accessibility
Log In Help Join The Motley Fool
Free Article Join Over 1 Million Premium Members And Get More In-Depth Stock Guidance and Research
By Rich Duprey – May 28, 2021 at 7:00AM

A cheap price can sometimes disguise an outstanding opportunity.

Some investors like penny stocks because they can control a lot of shares for just a few dollars and if the price makes just a small move higher then they can reap a windfall. Unfortunately, the saying "all hat, no cattle" can too often be applied to those pink sheet stocks as they often have little going for them other than a story that sounds good.

For just a few dollars more an investor can invest in a business that has much greater opportunity. Here are four stocks trading under $10 a share that offer a good deal on both price and potential. 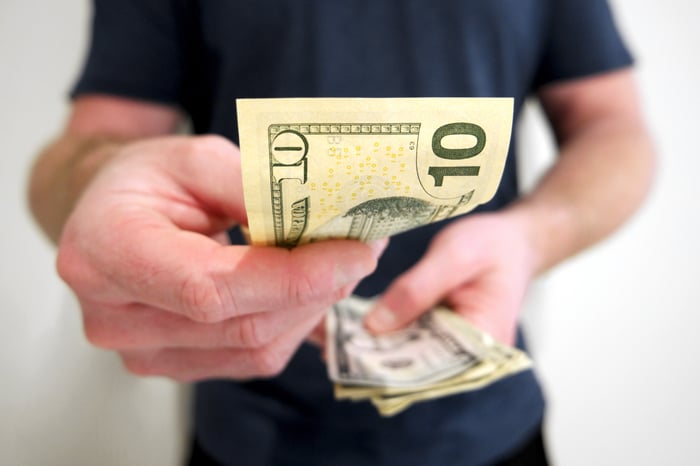 Ammunition manufacturer AMMO (POWW -0.34%) is up 90% year to date, still trades well under $10 a share, and possesses significant tailwinds that should keep pushing it higher.

AMMO recently updated its guidance for its fiscal first quarter ending June 30 and announced it expected to post its first-ever profit. Sales have been booming amid an ammo shortage as the sales of firearms continue exploding higher at record levels. It now expects revenue of $41 million, up from its previous estimate of $27 million, due to its having just acquired GunBroker.com, the world's largest online firearms auction marketplace.

That should allow it to benefit from riding both ends of the surge in demand for guns and ammo.

Canadian marijuana stock Cronos Group (CRON 3.90%) is one of several pot producers that would benefit from the much-discussed legalization of marijuana by the Biden administration, yet the $1.8 billion equity investment in Cronos by tobacco giant Altria (MO 2.45%) could give it a competitive edge.

While some rivals have taken investments from beverage companies in a bid to exploit the opportunity in marijuana derivative drinks, legal weed would be a natural extension of the cigarette business from the owner of the massive Marlboro brand.

To date Cronos Group has been mostly a forgotten investment by Altria, but marijuana legalization could spur the tobacco king to action, particularly as its traditional cigarette business declines and its vaping products, both the Juul electronic cigarette and Philip Morris International's IQOS heated tobacco unit, are pressured.

Cronos Group could be the perfect way for it to tackle an all-new growth market.

Horizon Acquisition II (HZON) spiked as high as $12 per share in early March after speculation the special purpose acquisition company (SPAC) was about to merge with Swiss gambling-data company Sportradar. They settled back down to around the $10-per-share range when it didn't occur.

Since the whole reason a SPAC exists is to merge with another company, the prospects for Horizon entering into the hot sports betting market looked especially promising. They still do.

The two companies are reportedly still in negotiations even at this late date. The sportsbook data company could be valued at around $10 billion. Sportsbooks and betting outfits have been all the rage lately and have found going public via SPACs to be particularly profitable.

DraftKings went public last year (its CEO is on Horizon's board), followed by Golden Nugget Online Gaming, and most recently, Genius Sports. Horizon Acquisition II could be looking to quickly cash in on the interest surrounding the intersection of sports, betting, and finance, too.

Although the target of the mall operator's SPAC is generalized to the point of being meaningless, seeking out a business that is a "disruptive retail, hospitality, entertainment, or real estate business" gives it a broad universe of businesses from which to choose.

The filing says "this new pillar will support (Simon Property Group's) delivery of innovative solutions to elevate and reinvent shopping and transform retail."

How, we don't know, but malls could be ready to rebound. Mobile-device location data from analytics firm Placer.ai says foot traffic at a representative sample of 52 malls in March was up 86% from the same month last year indicating there remains latent demand among consumers to shop, even if it's what some analysts call "revenge shopping."