Please ensure Javascript is enabled for purposes of website accessibility
Log In Help Join The Motley Fool
Free Article Join Over 1 Million Premium Members And Get More In-Depth Stock Guidance and Research
By Jeff Little - May 28, 2021 at 6:15AM

A story equally impressive may be in its overseas activities.

2021 is looking to be the year in which we find some normalcy and recovery. For Curaleaf Holdings (CURLF 0.25%), a vertically integrated cannabis producer, 2021 has so far been nothing short of record-breaking. The company recently reached a milestone $1 billion in annual sales, hitting $260 million in the first quarter of this year.

That revenue figure is up 170% year over year. Adjusted EBITDA is also up, 213% year over year, and 16% sequentially, resulting in a margin of 24%. And to top it off, the company has raised guidance for the second quarter by $10 million, a lift of 3%, with expectations of topping $300 million in quarterly sales. Higher revenue was driven by new products sold into retail and wholesale channels, led by the company's most successful product launch ever, the Select Squeeze THC-infused beverage enhancer. 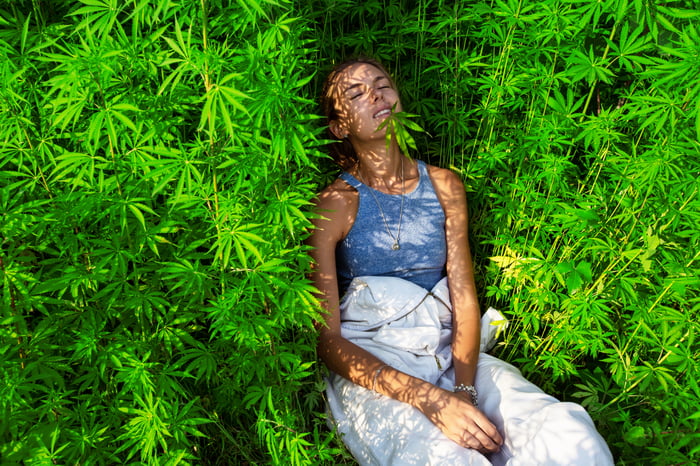 May has been quite the month for Curaleaf. The company was full speed ahead on the acquisition front, and tweaking its Maryland footprint along the way. It acquired Maryland Compassionate Care and Wellness, which provides the company with a 55,000-square-foot cultivation and processing facility, plus a dispensary in Maryland. Meanwhile, it sold off Maryland-located assets, including a cultivation and processing facility to TerrAscend (TRSSF -16.67%), along with a dispensary to privately-owned PharmaCann. This exchange of assets allows the company to upgrade its production capacity and further strengthen its No. 1 market share position in Maryland while serving more than 125,000 medical cannabis patients across the state.

Looking a bit further north and beyond 2021, the company expects to use $300 million in new funding to support adult-use cannabis efforts in New Jersey and New York, where markets have an estimated worth of $2.1 billion and $5 billion respectively. I could almost stop writing now, because you might already have reason enough to be fully interested. But there's more.

In addition to opening four new stores in Pennsylvania, and Illinois -- home of competitor Green Thumb Industries (GTBIF 1.35%) -- the company expanded overseas in Europe, where it closed the acquisition of EMMAC Life Sciences, the largest vertically integrated independent cannabis company in Europe. EMMAC brings Curaleaf a developed platform and entry into key European markets for medical cannabis including the U.K., Italy, Spain, Portugal, and the largest market on the continent, Germany.

Through the company's subsidiary, Adven, Curaleaf is launching new medical cannabis products in Germany, in the form of oils and flowers with varying strengths of TCH/CBD combinations. The market is estimated to be worth $2.1 billion by 2025. In commenting on the European actions, executives from the company noted that the European market is already experiencing political liberalization around cannabis, and they believe that the market in Europe could exceed the U.S. market over the long term, resulting in a $120 billion addressable market opportunity.

Back home in the U.S., Curaleaf continued to expand its presence as well. The recent acquisition of Los Suenos Farms in Colorado brought the largest outdoor grower in the state under Curaleaf's wing. The purchase adds three outdoor grow facilities, an 1,800-plant indoor grow, and two retail dispensary locations. Through all of these moves to expand, the executive team fully understands the importance of keeping costs down.

Executive chairman Boris Jordan said in a press release about the acquisition that it "furthers the company's strategy of constructing low-cost supply chains that will secure healthy margins and position us for interstate commerce when it comes. Ultimately, our goal is to cultivate cannabis at less than $100 per pound, and this acquisition is a significant step in the right direction."

It is also expected to increase the wholesale capacity by 50,000 pounds per year, which the company intends to double for even greater market share. This will strengthen Curaleaf's Select brand of cannabis products, currently found in 230 dispensaries in the state of Colorado, and in 2,000 locations across 17 other states.

Is now a good time?

Curaleaf's performance is currently covered by 16 analysts, who have an average 12-month stock price target of $22, between a low of $19 and a high of $28. The current price of about $14 sure looks like a bargain at those target levels. Hitting even the low of those targets would result in a gain of 36%. With big moves powering growth and expansion within and beyond the U.S., Curaleaf makes a strong case to be added to investors' portfolios now and held for the long term.