Please ensure Javascript is enabled for purposes of website accessibility
Log In Help Join The Motley Fool
Free Article Join Over 1 Million Premium Members And Get More In-Depth Stock Guidance and Research
By Cory Renauer - May 29, 2021 at 7:07AM

This provider of genome mapping tools is showing signs of exponential growth ahead.

If you're looking for life science stocks that could make you a millionaire, Bionano Genomics (BNGO -4.31%) is beginning to look like a strong candidate. The company's quickly cornering the market for a service that can find gene mutations that DNA sequencing machines tend to miss.

Investors who bet $10,000 on DNA sequencing heavyweight Illumina back in 2004 saw the value of their shares reach the $1 million mark in 2018 and it's still marching higher. Does Bionano Genomics have what it takes to produce Illumina-sized gains for patient investors? 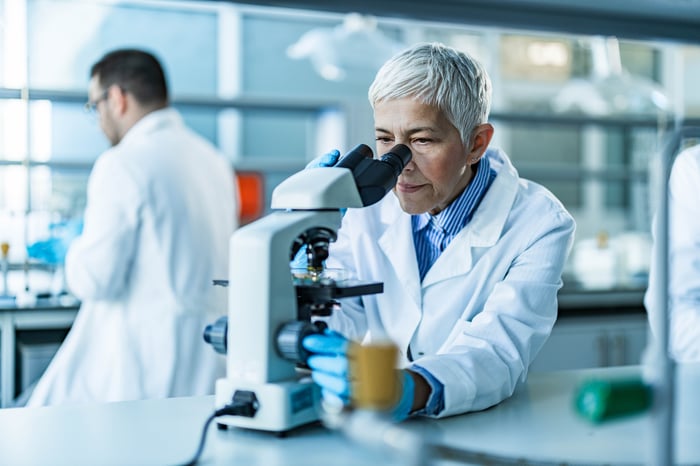 The technology that made Illumina a huge winner for its long-term investors has a serious flaw. Chopping long DNA strands into smaller, easily readable pieces then stitching them back together again is relatively quick and cheap, but it misses lots of mutations that lead to severe diseases.

In a nutshell, Illumina's machines aren't much help when it comes to finding mutations that involve really long sequences of DNA that repeat themselves over and over again. The Saphyr system from Bionano Genomics, though, employs proprietary optical mapping technology that excels at identifying long DNA sequences that have been deleted, repeated, or inverted.

Bionano Genomics wasn't the first to market optical genome mapping technology for biomedical research, but it's miles ahead of any potential competitors. The company shipped 11 Saphyr systems in the first three months of 2021, bringing the total to 107 at the end of March.

Sales of consumable goods that researchers need to buy from Bionano Genomics every time they actually use their new Saphyr machines are accelerating. This suggests previously installed machines are getting heavier workouts and not just gathering dust. The company sold 2,603 flow cells in the first quarter, a 275% increase over the previous-year period and a new company record.

Getting third parties to pay for your product is the key to success in any healthcare endeavor. While the Saphyr system is used to diagnose patients with ultra-rare diseases, Bionano Genomics has traditionally sold its tools to research institutions, not healthcare providers.

Allowing healthcare providers who don't have advanced degrees in molecular biology to add optical genome mapping to their rare disease diagnosis tool kits isn't going to be easy, but Bionano Genomics is marching in this direction. Around the middle of 2021, the company expects to begin marketing two laboratory-developed tests to healthcare providers in the EU. In the third quarter, the company will release prenatal testing kits and successful results from ongoing clinical trials comparing Saphyr-based testing to the current standard could drive sales through the roof.

It's still early innings, but Bionono Genomics' latest income statement suggests demand for optical genome mapping services is strong. The company spent $9.5 million on sales, general, and administrative expenses in the first quarter, which was just 29% more than during the previous year period. Despite the modest increase in operating expenses, first-quarter revenue jumped 179% higher.

At recent prices, Bionano Genomics sports a $1.7 billion market cap that could swell to many times its size, making you a millionaire in the process. But if lots of clinicians don't pick up what the company puts down over the next year, the stock price could also collapse.

Bionano Genomics stock is going to be extremely volatile for at least several more quarters because the company's still losing significant sums in an attempt to grow the business as quickly as possible. The company finished March with $370 million in cash after operations lost more than $11 million during the first three months of 2021. This cash burn rate could rise as efforts to market Saphyr systems gain steam, but the company probably has a long enough runway to reach profitability before depleting its cash cushion.