Please ensure Javascript is enabled for purposes of website accessibility
Log In Help Join The Motley Fool
Free Article Join Over 1 Million Premium Members And Get More In-Depth Stock Guidance and Research
By Will Healy - May 29, 2021 at 8:10AM

As the stock pulled back, revenue growth kept shooting higher.

GrowGeneration (GRWG -3.97%) experienced a massive surge in 2020 as it began to stand out among hydroponics retailers. However, it began to fall back in February, dropping by almost 40% from its 2021 high. Nonetheless, considering its rapid growth rates and its increasingly critical role in an emerging industry, investors should consider the stock's recent struggles as a buying opportunity rather than a reason to sell. 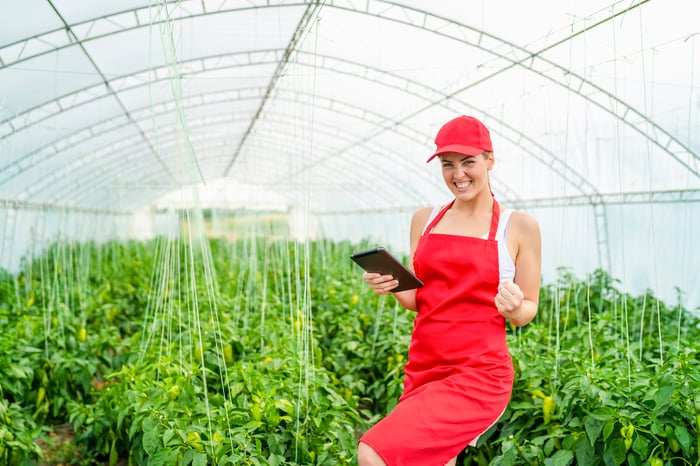 Investors should realize that the issue relates to GrowGeneration stock, not the company itself. After the recent pullback, the stock trades near the levels it had reached on Jan. 1.

However, investors may have balked at a valuation that priced GrowGeneration for perfection. At its February peak, it had reached a price-to-earnings (P/E) ratio of about 800. Nonetheless, the company has since released its earnings for both 2020 and the first quarter of 2021. Between the stock price decline and improved earnings numbers, the P/E ratio has fallen to the 170 range. 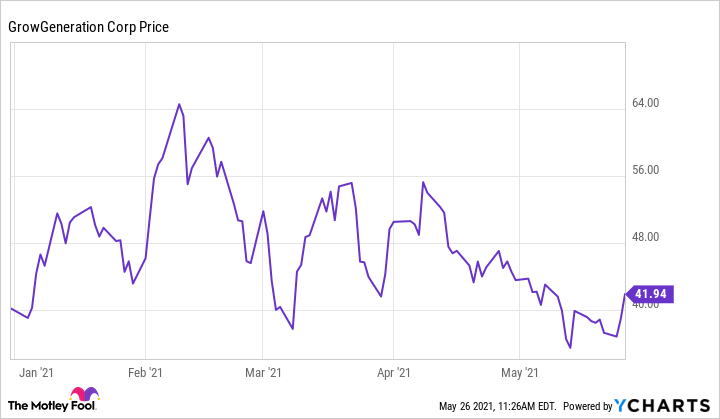 Moreover, recent financials offer little to dislike. First-quarter revenue surged by 173% from year-ago levels to $90 million. The company also reported a GAAP net income of $7.7 million compared with a loss of $2.1 million in the same quarter last year. While most expenses increased massively along with revenue, the company increased profits by limiting the rise in selling, general, and administrative expenses to just 5%. The company attributed this smaller increase to a massive drop in share-based compensation costs.

GrowGeneration has made these strides by building a competitive advantage in a highly fragmented industry. Over 2,400 hydroponics stores operate in the U.S., according to IBISWorld. This should come as no surprise since the emerging cannabis industry has fueled demand for hydroponics supplies.

Additionally, this increased popularity has fueled specialization. While Home Depot (HD -0.17%) and Lowe's offer some hydroponics supplies, they lack the room to venture beyond generalized products.

GrowGeneration has also taken this specialization further by offering private label products. In recent months, it acquired Canopy Crop Management and Char Coir to increase the size of its product portfolio.

It has also embarked on an aggressive expansion plan. Since the beginning of the year, it has added 14 stores and plans to acquire six additional locations. In the Q1 2021 earnings call, management confirmed it remains on track to grow to 100 stores by 2023 and expressed a goal to operate in all 50 states eventually. GrowGeneration currently runs 53 locations.

The company appears to need additional stores. Same-store sales increased 51% in the first quarter and 63% in 2020. In comparison, Home Depot usually reports single-digit increases in comparable sales, though comparable sales growth spiked by 20% in 2020 amid the pandemic.

Nonetheless, GrowGeneration's massive issuance of shares to finance store expansion may give investors some pause. The number of shares available now stands at about 59 million, up from less than 39 million one year ago.

Still, considering that the stock sold for around $3 per share 14 months ago, one can understand such a decision. Additionally, since the company invested that capital in adding stores and private label products, the share issuances may profit shareholders long-term despite the massive dilution.

Putting the sell-off into perspective

GrowGeneration continues to benefit from the massive demand for hydroponics fueled by a rapidly expanding marijuana industry. Admittedly, the 800 P/E ratio in February may have justified the "terrible quarter" for the stock. Nonetheless, the P/E has now fallen to below 200. Moreover, with its triple-digit revenue growth and the fast pace of new store openings, this consumer discretionary stock will likely not remain depressed for long.

3 Reasons to Consider GrowGeneration Amid a Mixed Earnings Report