Please ensure Javascript is enabled for purposes of website accessibility
Log In Help Join The Motley Fool
Free Article Join Over 1 Million Premium Members And Get More In-Depth Stock Guidance and Research
By Alex Carchidi - May 29, 2021 at 6:15AM

Assuming tomato prices recover by then, that is.

Sometimes, great investments come in the form of weird companies that don't fit the traditional mold. Whether it's via a complicated business model or competing in seemingly disparate market segments, there can be money in the wings for those who do what others wouldn't think to.

In this vein, meet the quirky Village Farms International (VFF -5.07%), which cultivates both tomatoes and cannabis -- when it's not working on its clean energy program, that is. Village Farms isn't a traditional cannabis company, and it's actually new to the industry. Still, investors would do well to pay attention to this stock, because it could have the potential to triple in value in the near term, assuming it tackles a couple of its pressing issues. 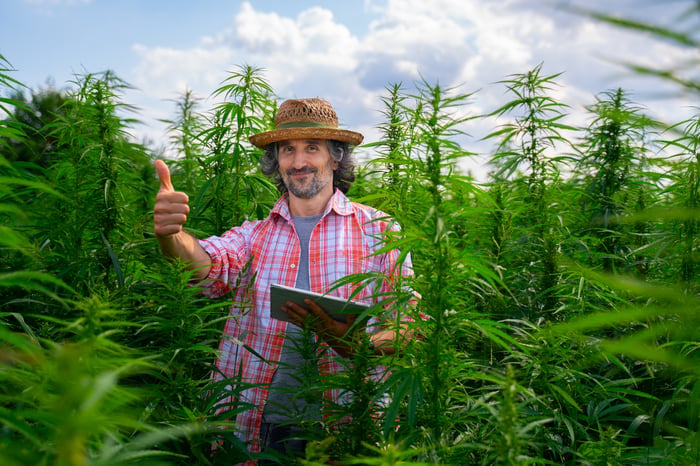 How it could triple

Thanks to its two cash crops, Village Farms has a diversified revenue base. That means its earnings are somewhat resistant to adverse economic events in any single area that it competes in. Plus, it gives the company a few different sources of upside. But when it comes to making investors rich, it's the company's cannabis products that matter the most. As juicy and delicious as luscious ripe tomatoes are, there's just not much of a gold rush for them like there is with cannabis.

To take advantage of the growth of the Canadian cannabis market, Pure Sunfarms, Village Farms' recently acquired cannabis cultivating division, is in the midst of ramping up its output capacity. Management anticipates that cultivation capacity will increase by as much as 50% by the end of 2021. In first-quarter 2021, the first full quarter since acquiring Pure Sunfarms in November 2020, revenue grew 63% year over year.

And the company also expects to scale up output by an additional 50% by the end of 2022, compared to its output today. That's a promising development, considering that Pure Sunfarms was profitable before the acquisition, and its gross margin was quite healthy at 40%.

Given Village Farms' decades of experience with greenhouse cultivation of tomatoes, it's well positioned to grow cannabis by leaning on the same skills. Nonetheless, its stock had a wild 12 months, growing from around $5 to above $15 before giving up most of its gains after a bad earnings report in May of this year. So, its stock has already shown that it can explode in value from its present level, if it reports earnings that satisfy shareholders. 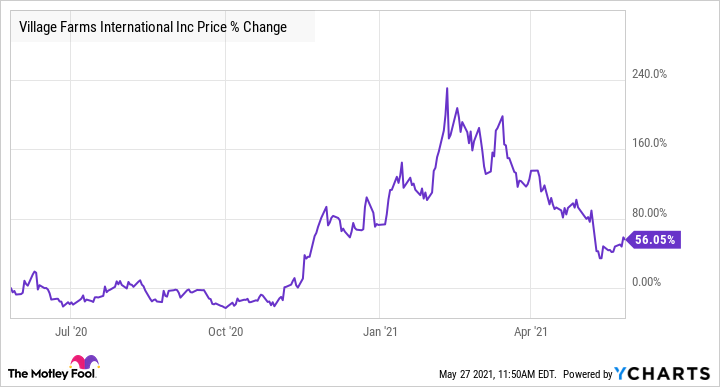 Despite its diversified business, Village Farms faces a tricky obstacle. As a grower of tomatoes and cannabis, it's at the mercy of fluctuations in the market value of its produce. That means its prospects of tripling in value are not entirely within its control.

Village Farms' latest earnings report was brutal, causing its stock to plummet on May 10. The company registered a net loss of $7.4 million in the first quarter of 2021, a decrease of 276% in comparison to Q1 of last year. In total, its adjusted earnings before interest, taxes, depreciation, and amortization (adjusted EBITDA) plummeted by 63%. Management rightfully explains that the drop is partially a result of rock-bottom prices for tomatoes. If the tomato market continues to show the same distortions from last year, it could take some time before the company's financials improve.

Tough breaks with tomato prices aside, selling, general, and administrative (SG&A) expenses grew by more than double, reaching just over $8 million. Likewise, Village Farms' cost of revenue grew from $31.34 million to $50.09 million. Both of those increases are a result of the Pure Sunfarms expenses being consolidated with Village Farms', so they aren't likely to be transient. As long as they don't continue to grow sharply, investors don't need to worry.

Still, there's a risk that less informed investors may see the combination of collapsing earnings and sharply rising costs and decide that there is something seriously wrong with the company, which could be a headwind against growth in the stock price. Likewise, Village Farms' history of a razor-thin and highly inconsistent profit margin could remain an issue.

Is it worth betting on Village Farms?

When I started researching this stock, I was very skeptical. How could a tenuously profitable tomato company with skyrocketing costs hope to compete in a brand new industry where it had no experience? Upon digging deeper, however, it's clear to me that many of the bruises on Village Farms' stock are the result of short-term factors that will ease with time.

Tomato prices will eventually recover, and revenue from Pure Sunfarms will continue to power the company's growth, making its operating costs significantly easier to bear. As both of these drivers develop, the stock price should rise accordingly. So, while I'm not ready to bet the entire farm on Village Farms, I do think that it could realistically triple in the next few years, which means that it could warrant an investment sometime in 2021.