Please ensure Javascript is enabled for purposes of website accessibility
Log In Help Join The Motley Fool
Free Article Join Over 1 Million Premium Members And Get More In-Depth Stock Guidance and Research
By Alex Carchidi - Jun 1, 2021 at 8:30AM

It helps to be realistic about valuation and timing.

With a huge amount of liquidity sloshing around the market, it's no surprise that dubious investments like Dogecoin (DOGE 1.93%) are in vogue. And with the interconnection of markets being stronger than ever, it's understandable for investors to worry that inflated cryptocurrency prices are part of a larger bubble.

The fear of a bubble popping often motivates people to invest poorly. So if you want to protect your portfolio's value, you'll need to understand how to avoid making a pair of the most common mistakes during a bubble. 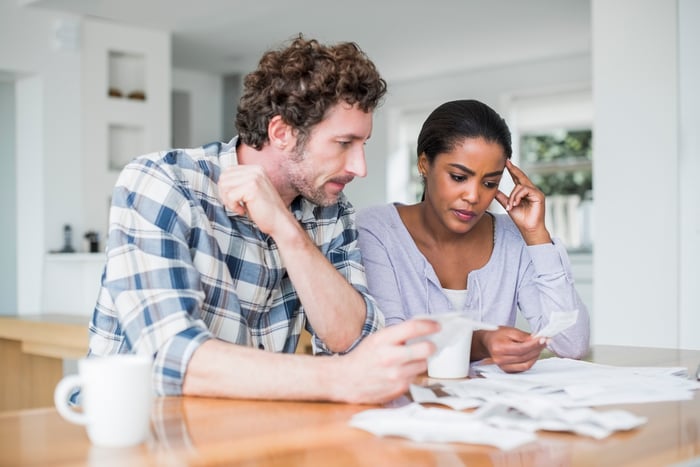 Don't throw your money into a stock or cryptocurrency because everyone is talking about it. The more people are investing in a hot issue, the more likely it is that they're buying something that's overvalued relative to its fundamentals. That's true whether the asset in question is something like Dogecoin or whether it's something that's supposedly intended to protect investors against the collapse of bubbles.

Take the recent saga of Ocugen as an example. Amidst ongoing enthusiasm about the prospects of commercialization of its coronavirus vaccine, the stock exploded in early February of this year. By the end of March, its trailing price-to-sales ratio sat at a truly astounding 17,880 -- and that's after the price collapsed from its highest peak. For reference, the biotechnology industry's average price-to-sales ratio is 8.1. To call the stock overvalued at that point in time is a massive understatement.

Eventually, companies either report new information that justifies their expensive valuations, or their stock comes back down to earth once investors come to their senses. In the first half of this year, Ocugen's stock took the latter path, but its story is still being written. Keep in mind that even at that bloated valuation, Ocugen had less than $43,000 in trailing revenue. You can be skeptical about the stock's merits, but at least there's enough financial information to analyze it in a structured way.

In contrast, Dogecoin has no intrinsic value. Once people get bored of it, there won't be any mechanism for its price to rebound as there aren't any anchors like revenue or earnings to use in a valuation calculation. By buying it right when everyone else is talking about it, all you're doing is ensuring that you pay the highest possible price. Be mindful of any narrative that seems too good to be true, and don't let your desire to escape one bubble lead you into another.

2. Thinking that it's possible to get in or out at the right moment

There's no way of knowing with certainty if we're in a bubble, and investors shouldn't try to time the market by sitting on the sidelines and waiting for a crash. Nor should investors trade too much in an attempt to take advantage of price swings.

If the market is deep in the later stages of a bubble, investing like business as usual is the best course of action (assuming that your regular mode of investing is the cautious pruning and nurturing of your equities, that is).

So long as your portfolio is well-diversified and steadily getting new infusions of carefully selected investments, your behavior doesn't need to change during a bubble. Using dollar-cost averaging, the impact of this volatile period won't affect your cost basis very much in the long term.

You can't time the market, but if you're consistent in your good investing habits, you'll understand that you shouldn't feel any pressure to try, even with Dogecoin -- provided that you believe in its merit as a long-term investment, of course.

On the other hand, if you typically shoot from the hip with your purchases, now might be a good time to step back and reset. Building wealth in the long term is much harder when you don't have a plan, and making impulsive decisions will only make the problem worse. Rather than trying to time the market, take the opportunity to chart a course for keeping your money in the market for a long time. If that means investing in something more stable than Dogecoin, that's probably for the best.